Go
Home » Van Life » In the Pursuit of Happiness

In the Pursuit of Happiness 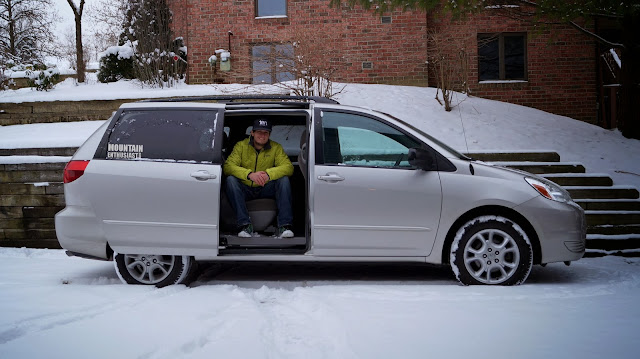 It has finally happened. I have turned over a new leaf, leaving my old 4 door sedan in exchange for the AWD, 21 mpg, 3rd row seating, designed for a family to drive in not live in, loser-cruiser. I'm not sure that this is what people would consider the American Dream, but it has been mine.

I’ve never cared what car I drive – how it looks, what it does, what status it holds, how it warms your butt – except for the fact that if it’s engine wasn’t near blowing up or disintegration. Even when I was younger, sports cars never interested me, any car at all really. It wasn’t until I lived in/out of a little 4 door Mazda 3 for a 6 month period with another person that I got pulled into wanting a van. Yes, wanting a van, with an eventual desire to live out of. The king of being known as a mom go-to where Radio Disney is being played with 4 kids in the backseat drinking juice boxes and eating PB&J sandwiches on their way to soccer practice, is my style.

During a groomsmen photo shoot for a college friend’s wedding, my buddy Jon says to me, “Weiss look over there, that thing looks sick!”

“Dude that van looks like it could sleep two, easily,” referring to the double decker Ford van that caught my eye. Jon responds, “Yeah I was looking at the Audi S7…” That was last year, and even before then my eyes get drawn to the less-than-cool family haulers.

It is a van, so with my plan of living out of it, technically, makes me homeless. And how I see it, is a house that can take me places and not have to worry about a rent somewhere. Also, gives me the opportunity to maximize my time on a snowboard, which is quite exciting. I've never made an emotional decision in my life. Even when deciding to drive to Alaska to heli-ski I still decided based on logic. And in an odd, only my mind would understand type of way, this decision was completely logical. Living out of a van, I can see being a huge stretch as being anything but logical, but I have put a lot of time and thought into this decision.

I’m not going to boast that this is an impossible feat and I’m some pioneer, because I’m not. I’m not saying it’s going to be easy either as temperatures drop and as I travel into colder temperatures for splitboard mountaineering missions. For my friends in Ohio, this is out of the norm and probably a little crazy. Well for some of my close friends, they have adjusted to my odd behaviors and make fun of me for them accordingly. To my climber/skier/boarder friends, this is something they have seen and some dream about. I even talked about it with a friend, Joe, at the bar in Ohio about buying the van. You can tell right away what their words are going to be as soon as you see their eyes. His lit up because he’s a climber and understands the potential. While on the flip side, saying it to a girl at a bar who is looking for a free drink, has never worked and is downright creepy. (For the record, I’ve never lead with that.)

Sitting in the dealership and signing that final piece of paper with legal jargon on it, I had a sudden burst of excitement and then a split second after, a heart-stopping realization of what I have just started. The things that are common place in homes have now just turned into luxuries: use at any time personal bathroom, heat, refrigerator, stove with exhaust fan, an oven, or simply running water and electricity. All of those are no more and remedying the problems isn’t impossible but the solutions can be a bit embarrassing and mentally draining.

It does bring a great sense of (maybe false) security knowing that (A) I have lived on the road before but (B) there are other people doing it. Check out Instagram’s tag of #VanLife and you’ll see what I mean or see the examples below:

Pro climber Alex Honnold's van life. (Sorry about the ad I think he puts it perfect in this video of what I desire from life)

This adventure, journey, epic, whatever you choose to call it has only begun. I have no end in mind. It’s not like my most recent trip from Chile, knowing very well before the trip started that there was, indeed, an eventual end. What I do have tentatively planned are adventures in Colorado, Montana, California, and already scheduled out competitions competing in the Freeride World Qualifier.

Still, so many questions run through my head of doubt and full of “what if’s”. I’m sure they are the same “what if’s” that my parents are asking and you might even be asking. What if I can’t make enough money to live? What if it breaks down in the middle of nowhere? What if temperatures drop below zero and I have to sleep in that? What if, what if, what if, what if, what if. And then at night while I decompress away from everything with headphones in my ears vibing with Jurassic 5, thinking clearly only about snowboarding, the only “what if” that comes to mind that really matters is, “what if I don’t do it and I regret it for the rest of my life?” Fuck it, I’m doing it.
8 Comments
Van Life
Friday, January 03, 2014

Looks like a most excellent adventure you're about to embark on and I'm certainly looking forward to following your trip.

Soooooo stoked for you Steve!!! #VanLife is going to be awesome :) You just better at least bring it to you Utah a few times during your adventures.

Are you going to fix it up on the inside the The Morning Fresh did?!?! No one ever regrets picking up to travel!!! Of course, when I traveled, I had a company prearrange and pay for my apartment, furnishings, and utilities....but hey, there's more than one way to skin a cat!

Nice work, my friend. Excited to see where you go with this. PS Keep us posted on your CO adventures! You know you have a bed and a shower here whenever you need :)

Thanks man! Stay tuned on all of those Social Media Devices, I got em all!

Utah will always be home.

Yes, I am...still haven't since posting this. I'm a procrastinator. I wish I had a company pay for all of this, well maybe it did, called Steve Weiss INC.

I REALLY appreciate it Heather, but just a shower will make this guy super happy, anything more and my heart might explode with gratitude.