Central Colorado: Skiing a 14er and Mountain Biking the Desert 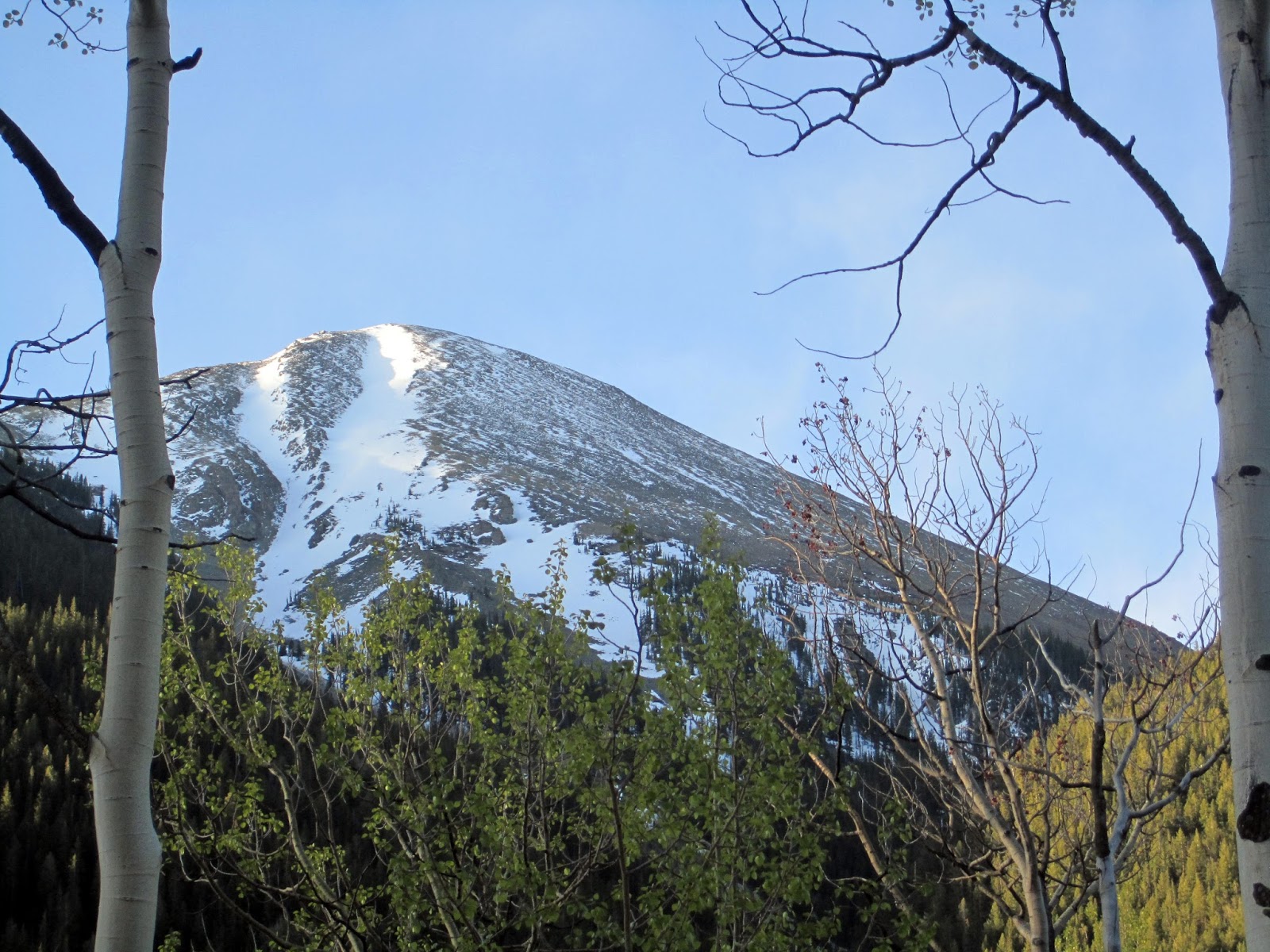 Memorial Day weekend, one of the few weekends we all get an extra day off to celebrate the many sacrifices that the men and women of the armed forces have given up for our freedom. Also happens to be one of the biggest travel weekends for our country as we get time to explore our country more or drink beers with friends, or whatever you like to do.

I decided to head down to Colorado as the 8-10 hour drive is something not really in my wheel house on only your standard 2 day weekend. I decided to head down to Aspen to see what could be skied as a quick look on a map would reveal a dense plethora of 14ers in the area. I also brought my mountain bike, mainly just to say that I can but it would end up being a great decision.

Day 1:
I had planned on camping in a secluded, super secret drainage that no one knows about just outside of Winfield, Colorado - a ghost town. I arrived around 2am with every single camp spot taken, filled with RVs. There were a lot of spots to camp and I couldn't find a single one so I pulled into someone else's as I was exhausted and really, did not care.

To note: Like most/all of the ghost towns in Colorado, Winfield was an old mining town. I didn't take any photos of it because of what I saw were 4 cabins. There's not much else to know but this site covers it thorough enough. 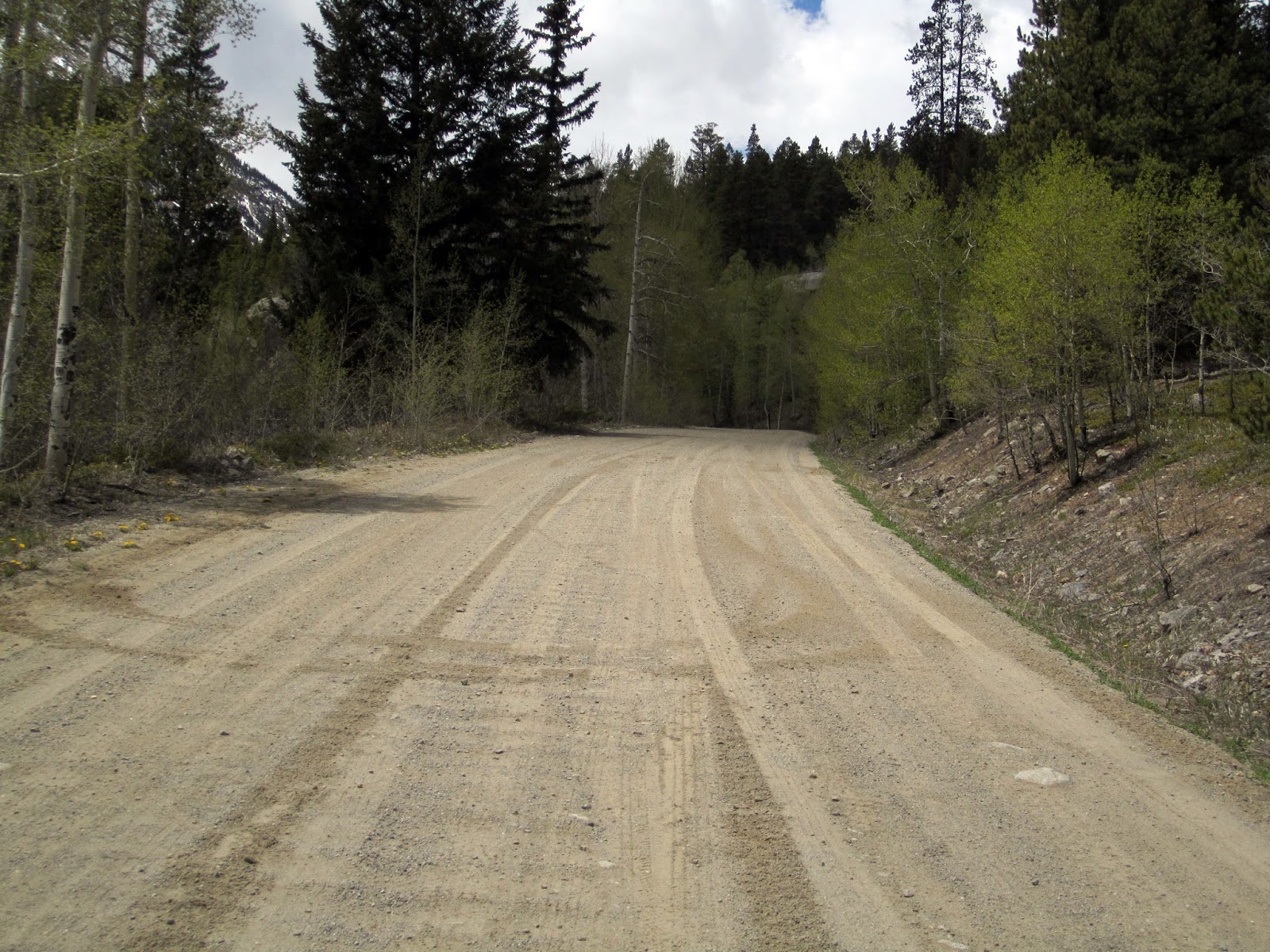 The road to Winfield is easily accessible for any car. 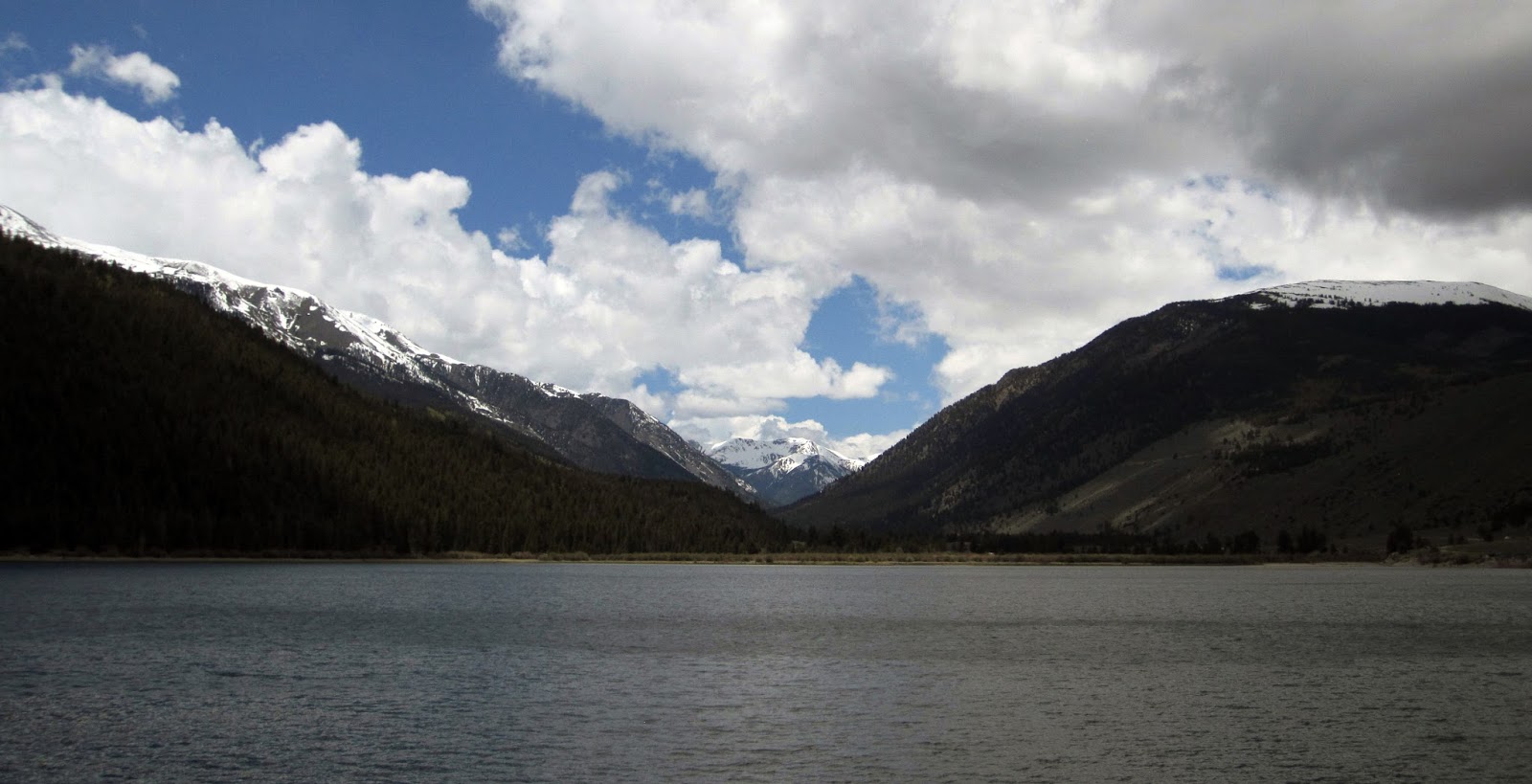 I woke up to people at around 7am, clamoring on, and in my haze heard someone say, "who here is from Wyoming?" Everyone laughed, clearly no one even noticed me showing up. I leapt into the driver seat, pulled out and went further down the country road to see what I had in store.

Driving down the dirt road it seemed I was alone. Not in the sense of people, but as a the token skier that showed up. There were plenty of motorheads, fishermen and your "I'm just here to camp and party" crowd. At the end of the road I met one climber. Apparently there were a few of them roaming around the area but not many. At any rate, Steve, the guy in an Arcteryx jacket gave me the run down of the area and told me I could take his camp spot as he was camping near Huron Peak. After chatting, I noticed it was getting late (8:00am) and had to find something to ski. Right in front of me was this: 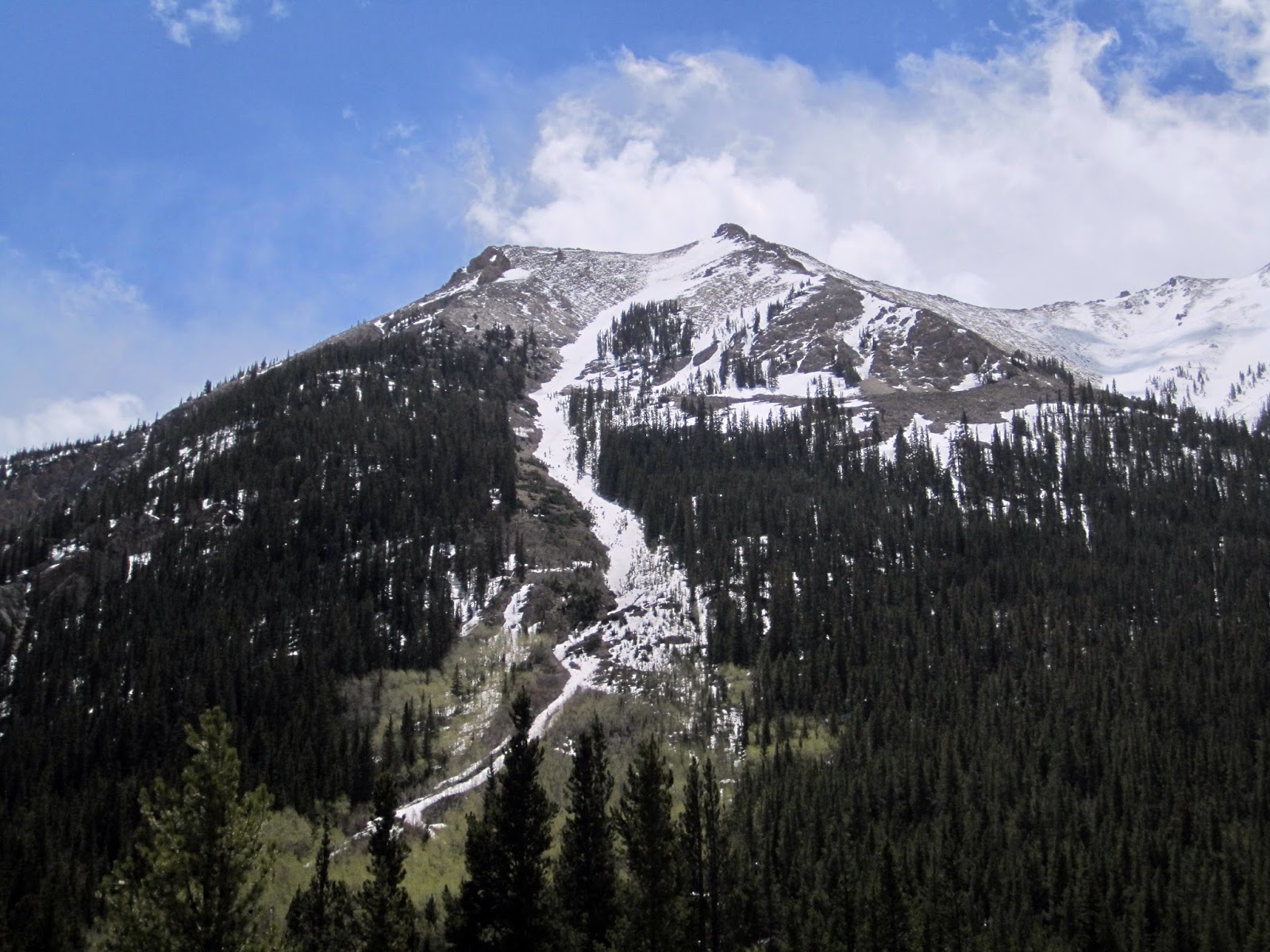 It was a really tough, 1.5 hour bootpack straight from the car. Seriously though, it was so nice to have ski in and ski out or rather boot in and boot out terrain. I hit the snow summit and noticed weather rolling in. With perfect timing, dropped in, hiked out, got into the van to take a nap and it starts snowing on me...in almost June. 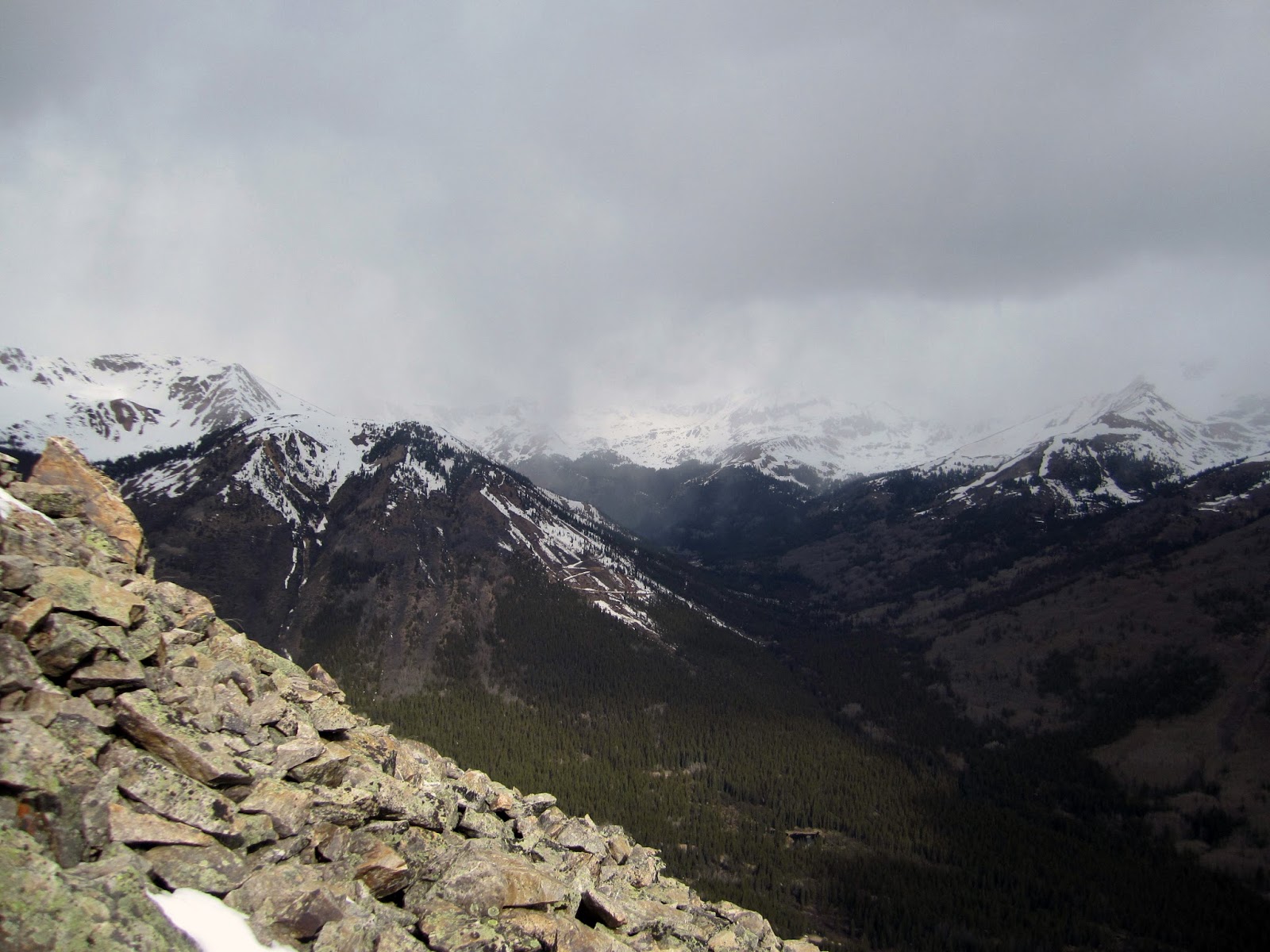 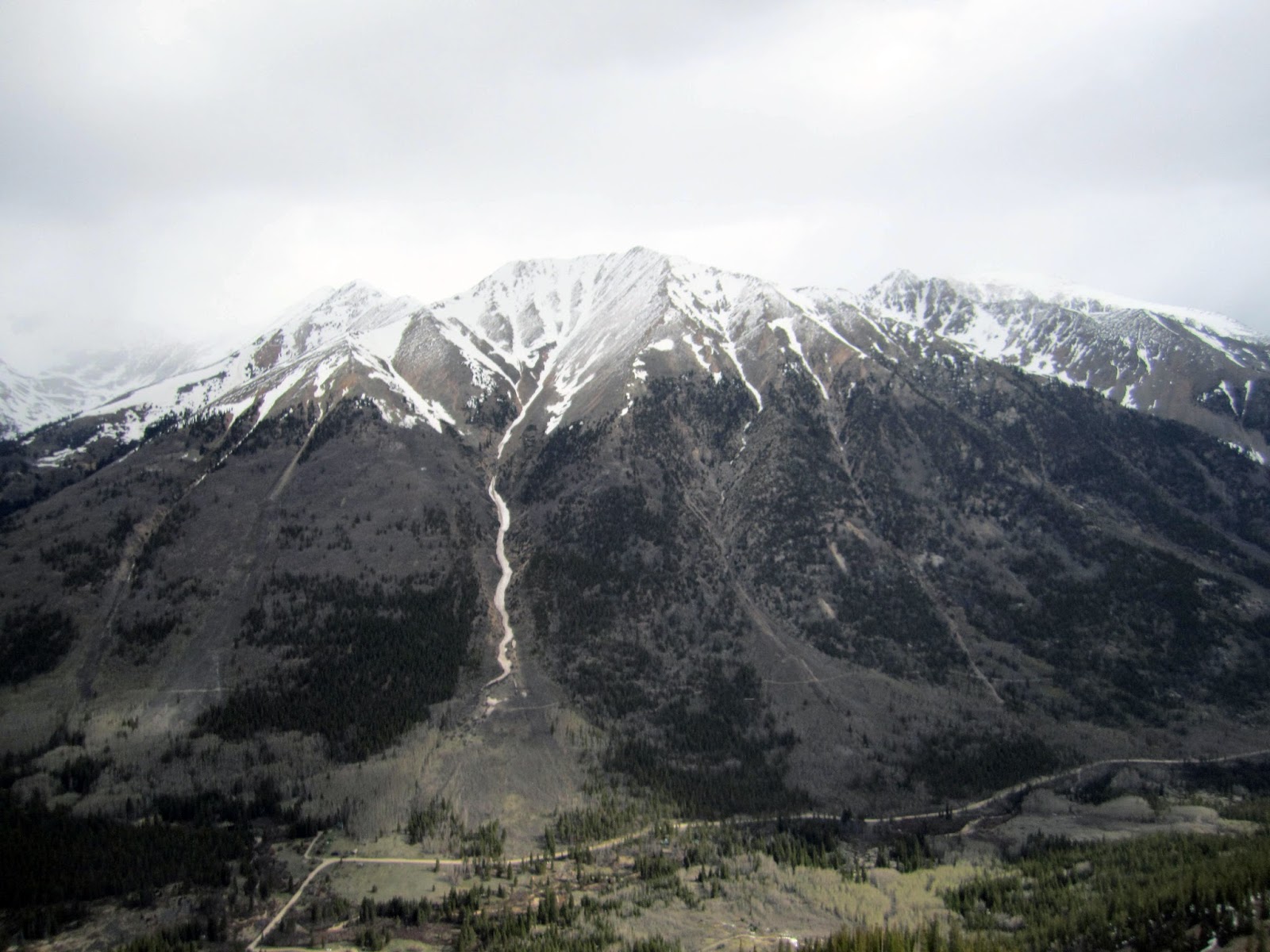 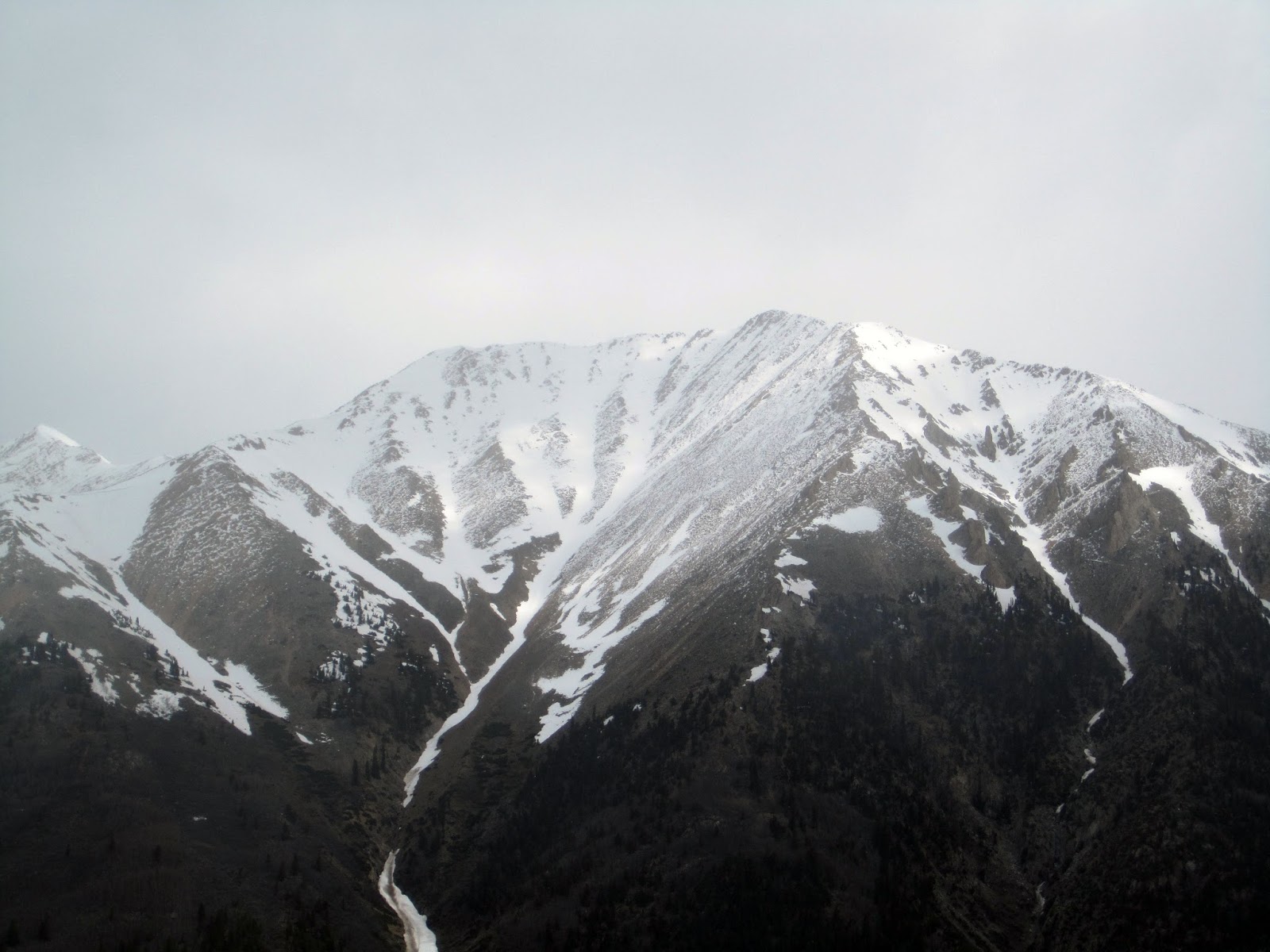 After my nap I drove down to Buena Vista to go mountain biking. The town itself reminds me of a lot of tourist towns. Shops on each side of Main St, some restaurants, some bars. I liked it. I headed over to Boneshaker to talk to the guys there and they sent me off with some beta and a map to ride the Midland Bike trail system. It was a great cross ride with plenty of vert, a nice downhill and arid style dirt different from Jackson. After riding I hit up the Jailhouse, a bar that stocks everyone else's beer. They buy a keg of beer from a brewer and when it's gone, it's gone. Great beer from all over the country, just no food.

Day 2:
In my head, I had plans to ski a 14er but the lack of sleep the night before had my body making the decision to not get up for an alpine start. So I headed to Salida instead.

I rode a trail system called Methodist Mountain. On trial I met some people from Denver who I would later meet up with again for a Bluegrass Festival in town but that's not here. We rode the trail for a total of 15 miles over a 3 hour time frame getting a little lost but not too bad of a lost situation. We rode Little Rainbow to Double Rainbow, what I think was the best, a great single track line hugging closely to a loose, rock ridge line with tight turns that, if going too fast, could cause you to miss the turn sending you down a trail-less hill. I would describe this system as more of a cross ride but still some good downhill mixed in there. Double Rainbow is the main downhill section, while Skull is another good one as well.

In the afternoon, my newfound friend dropped me off at the trailhead of the Cottonwood Pass/Trail/whatever it's called. We saw a couple of people biking the long 5 miles of rolling road to the trailhead as I sipped a La Croix. I was not envious of them. I thought, "well that sucks."

Getting my bike ready, I asked my friend where do I go. "Just go right. Have fun!" If you are in Salida this is a must ride, with a shuttle. Especially with a shuttle. The start of it all takes you through the trees into alpine-like riding. Fast, flowy is how I would describe this section. The next was a downhill more in the open then transitioned into a technical section of creek rocks. After doing that for a bit you finally come around to the front side of the mountain where you can see the town. Fast, flowy downhill through mountain grasses ending on Chicken Dinner a small section of trial that has gap jumps and a couple of table tops. This trail is a must do!

Day 3:
My last day in the area before heading back home 9 hours away, I had to ski a 14er. The point of being here. I woke up around 2-2:15am to get out and hiking before the sun baked the hell out of the snow. I made my way up Belford/Oxford, as I will admit, because I was lazy. I initially planned to ski Huron Peak but it was too far, for May 29th. I opted for the perfectly groomed trail of Belford to get my 14er. What was great about it too, was that you could just ridge walk to Oxford and boom, two 14ers bagged. 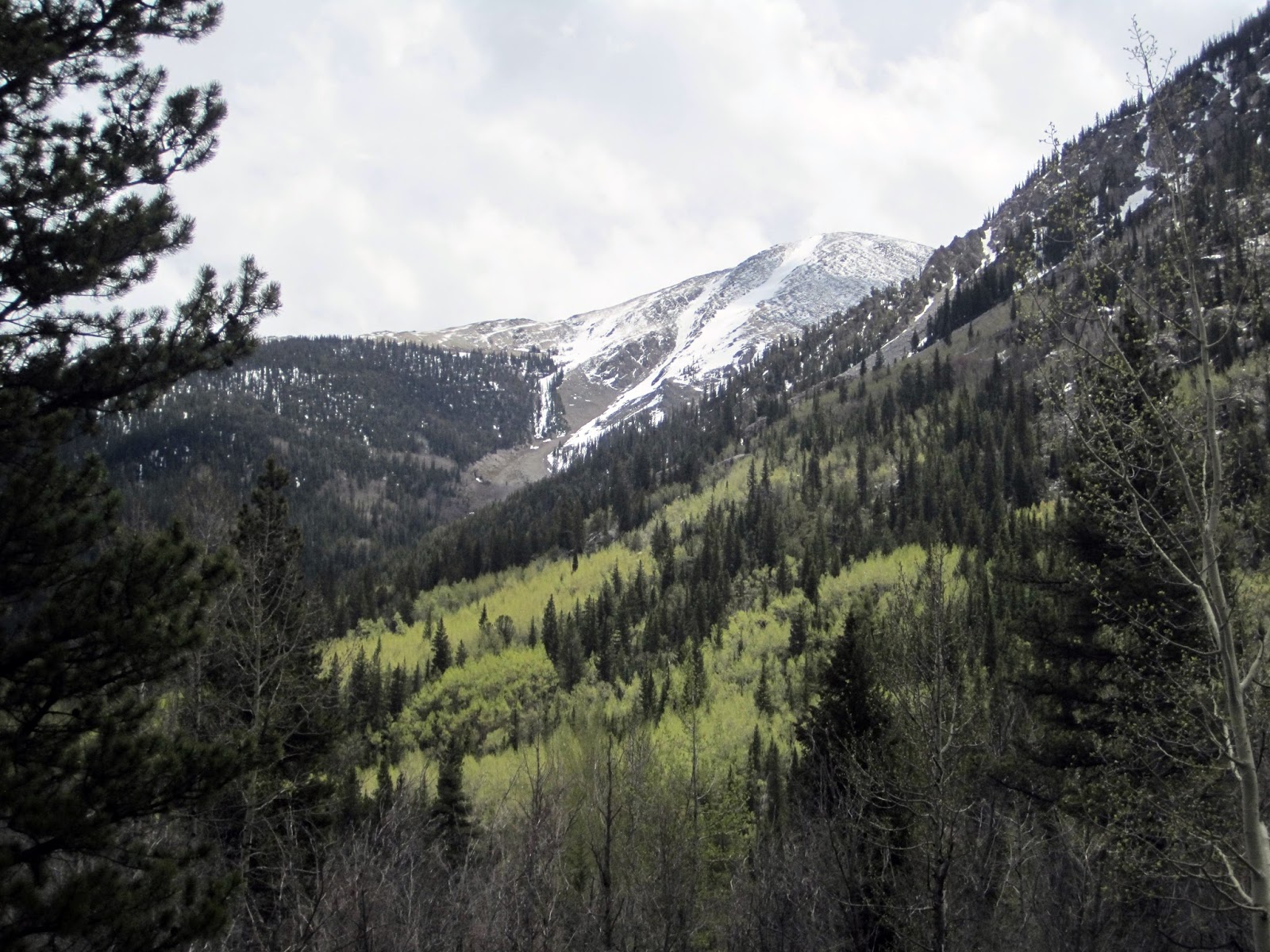 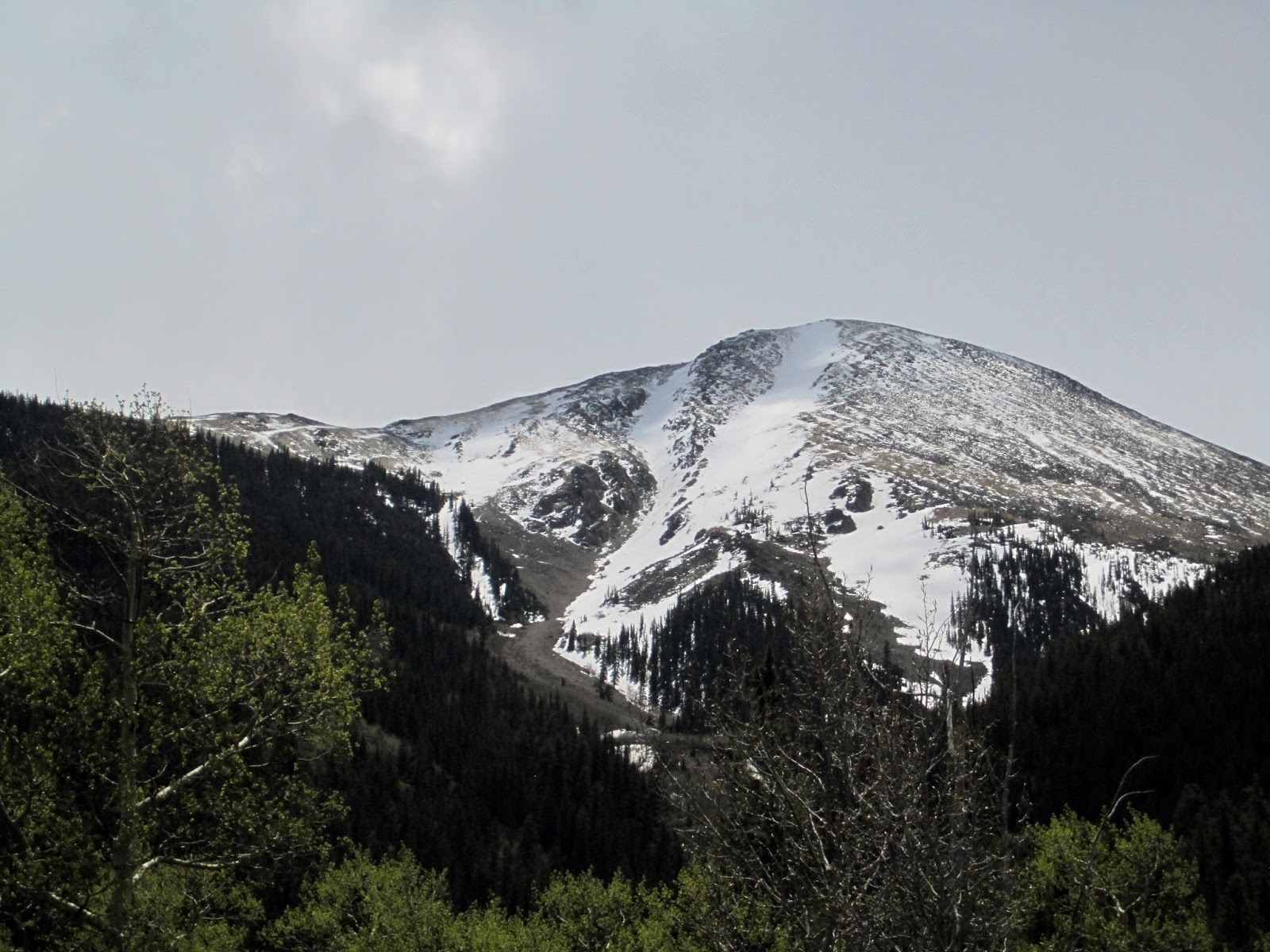 The skiing off of Belford reminds of a quote that the late, great Doug Coombs would say, "there is no bad snow, only bad skiers." With that said, I snowboarded some of the worst snow that hadn't avalanched yet. Getting off the snow around 12000' I put my board on my back and hiked back to my car. I was stoked for about an hour then it hit me, "Was it worth it? Eh, I guess." So I celebrated with a beer, got my stuff packed up and made the long drive back to Wyoming - exhausted, sore and fulfilled. 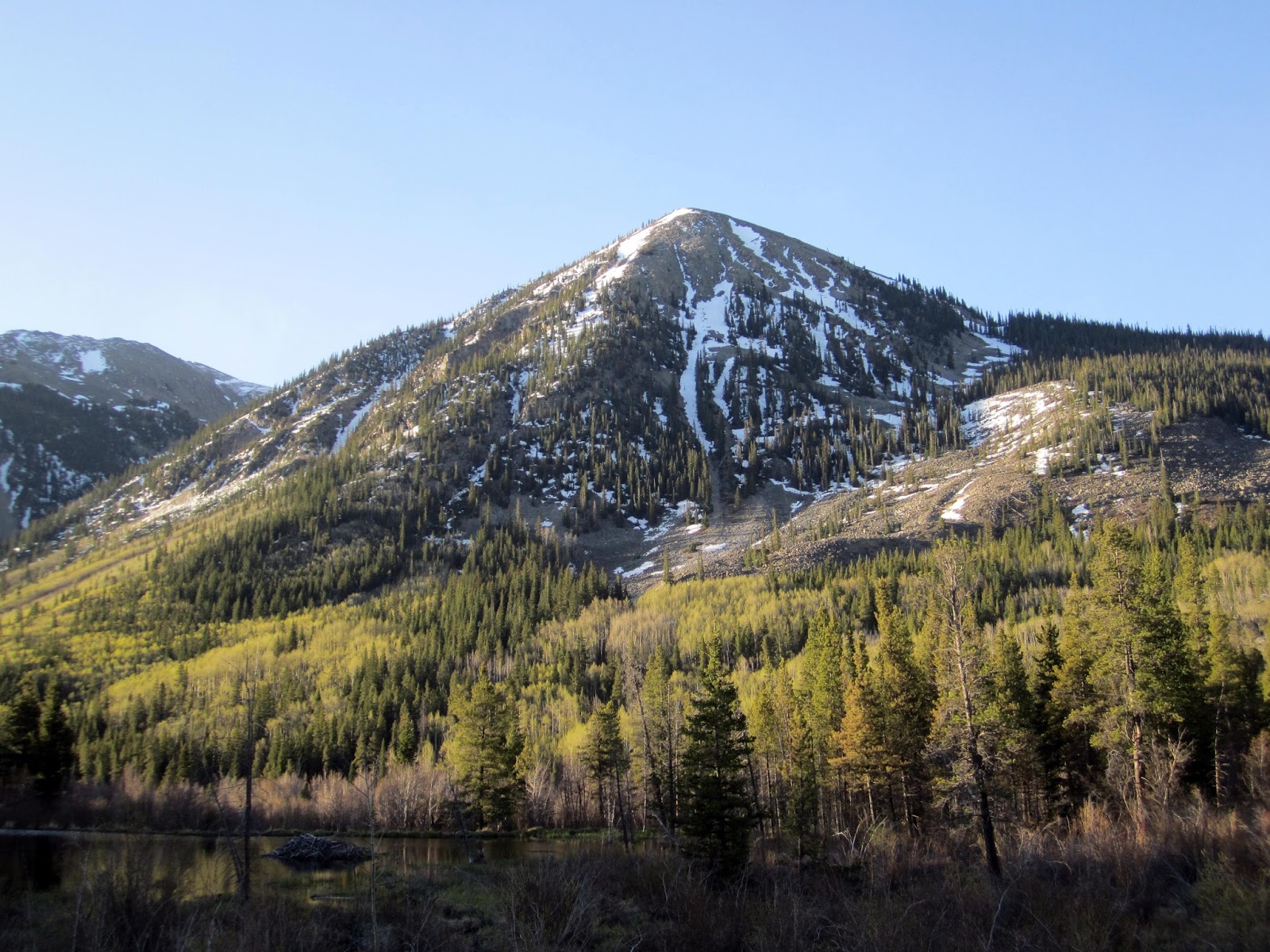