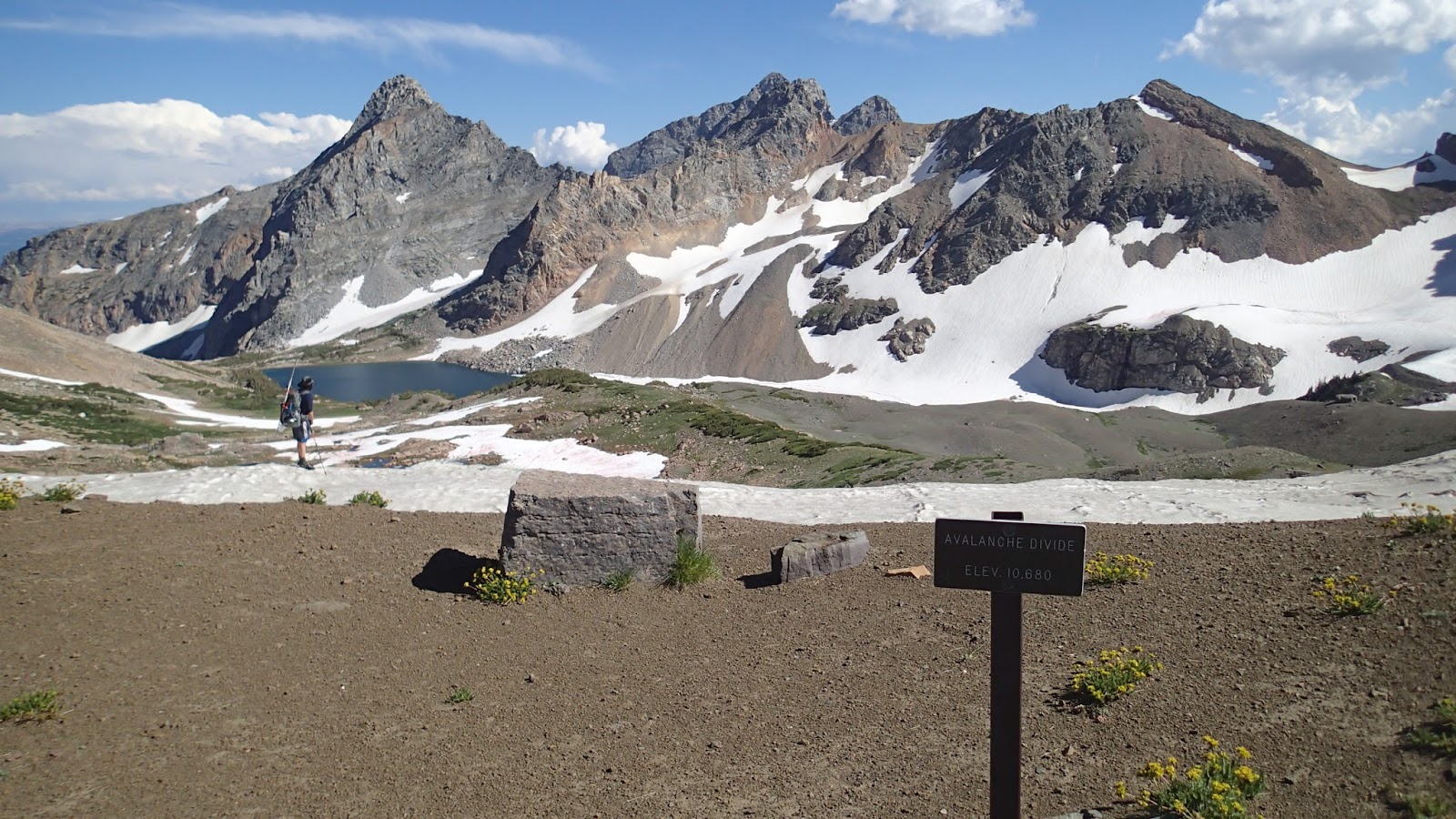 Definitely not my idea but a coworker had an idea to backpack Cascade Canyon to Avalanche Canyon in Grand Teton National Park. Discussing it on Monday, I was in because it sounded like an adventure and I had never actually gone through to complete Cascade Canyon nor have I even the idea to go into Avalanche Canyon. Could be a good trip to notch them both off.

Friday came and I finally looked into the route. Thomas had taken a photo from the road looking up at Avalanche Canyon and looking at SarTopo, we saw that the snow field we would have to come down in there was rough 50-55 degrees. I am not into glissading that steep of a slope so I brought up that maybe we should bring skis/board.

He agreed and so we did. We hauled those hefty 12 lbs of extra weight for a solid 10 miles before we actually needed them but I digress.

Below is how it all went, in photos and a few words.

Day 1: Cascade Canyon to Avalanche Divide
We got to the South Jenny Lake parking lot around 8:30 and started moving at 9am. Never have I been stopped by so many people asking about what we are skiing. In all fairness, it was probably odd seeing us at the end of July with skis.

At any rate, we made our way up Cascade Canyon, roughly 10 miles to the Avalanche Divide then down to our camp spot at Snowdrift Lake.

Before you see the photos, Cascade Canyon is continually talked up as one of the most beautiful canyons in the GTNP. Which is true, but cresting the Divide, seeing Icefloe Lake from below and the spot we snagged at Snowdrift were the highlights for sure. 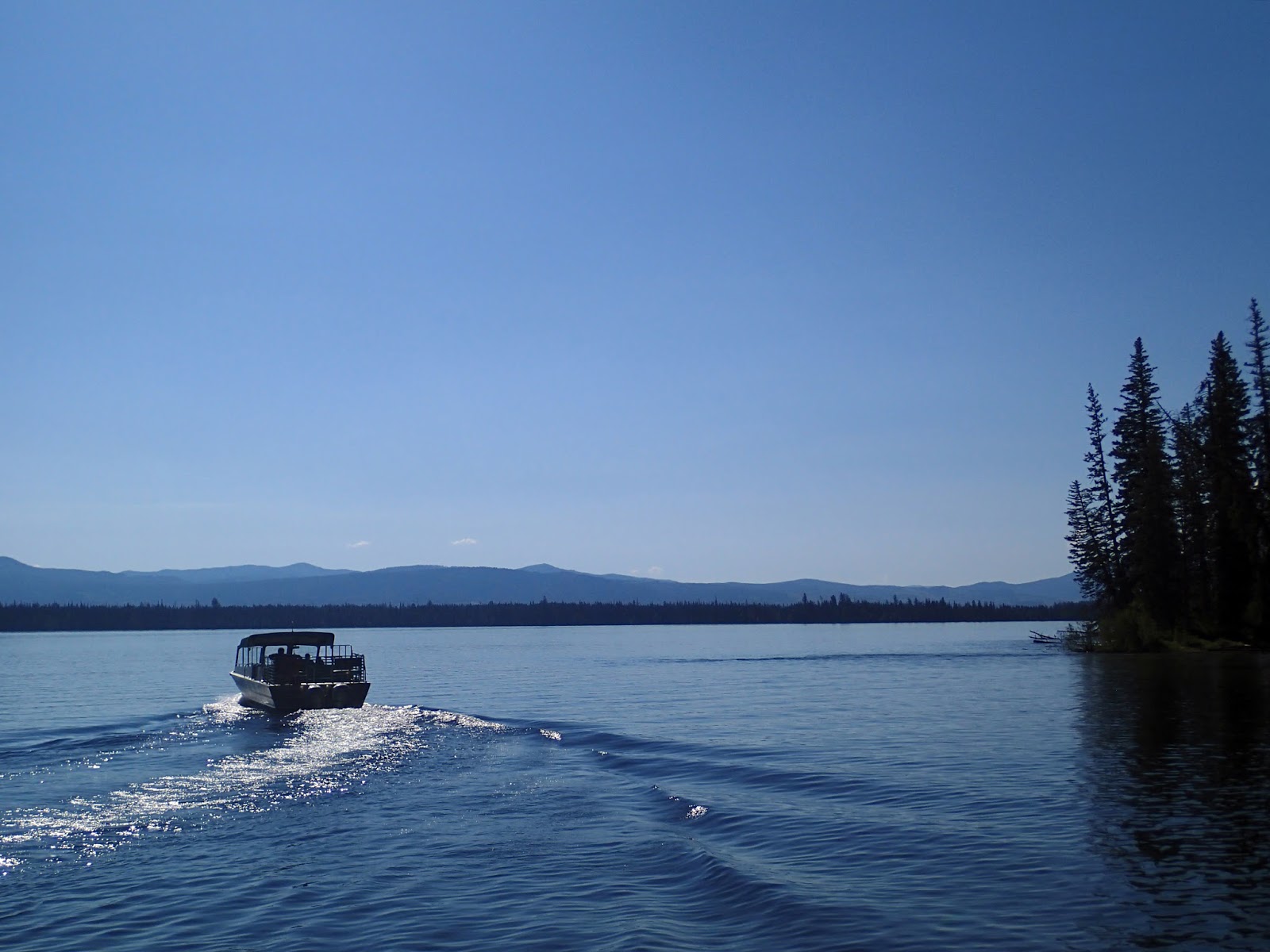 Took the ferry to shave off a couple of miles. In hindsight, worth the $9. 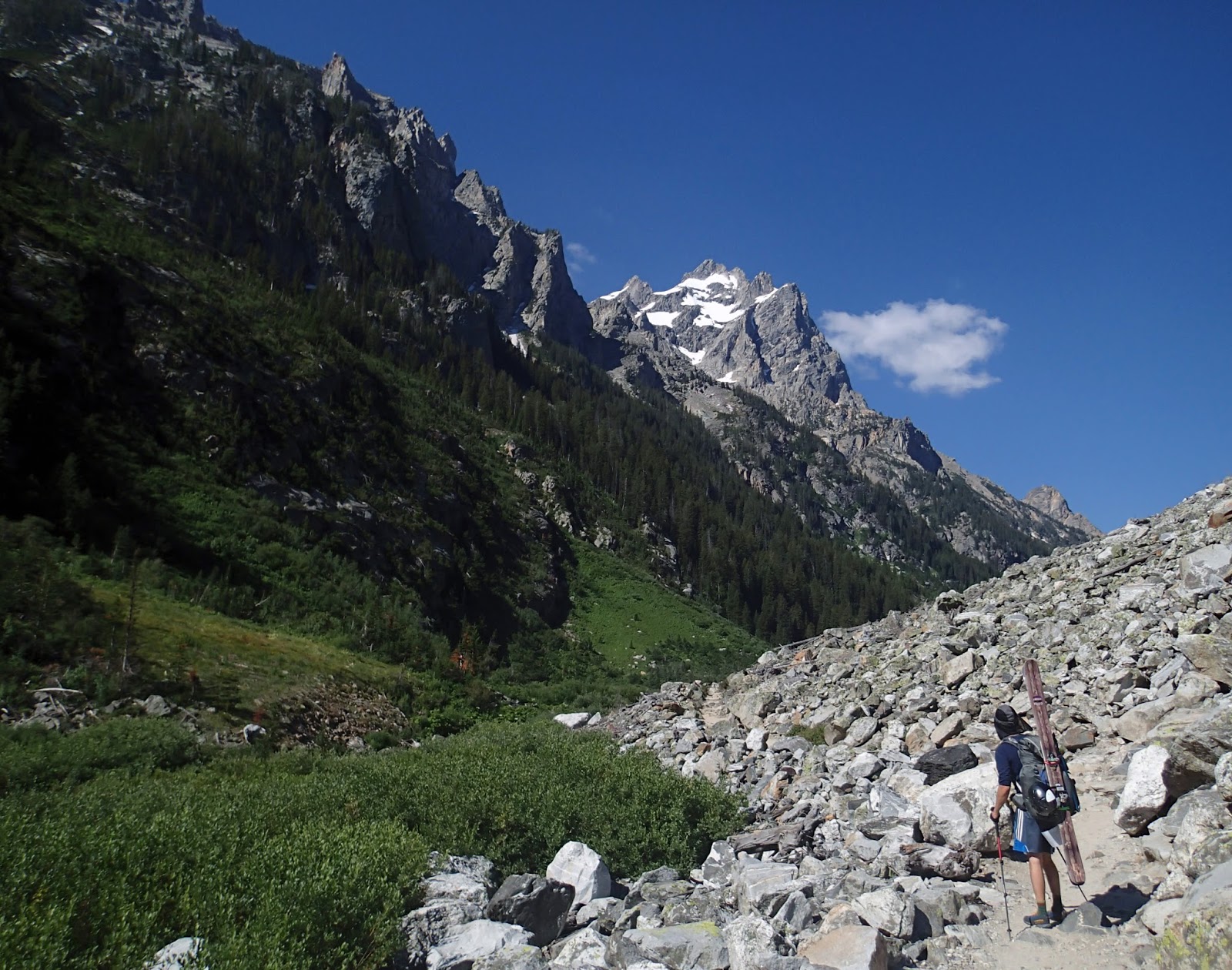 Looking into the beginning of Cascade Canyon 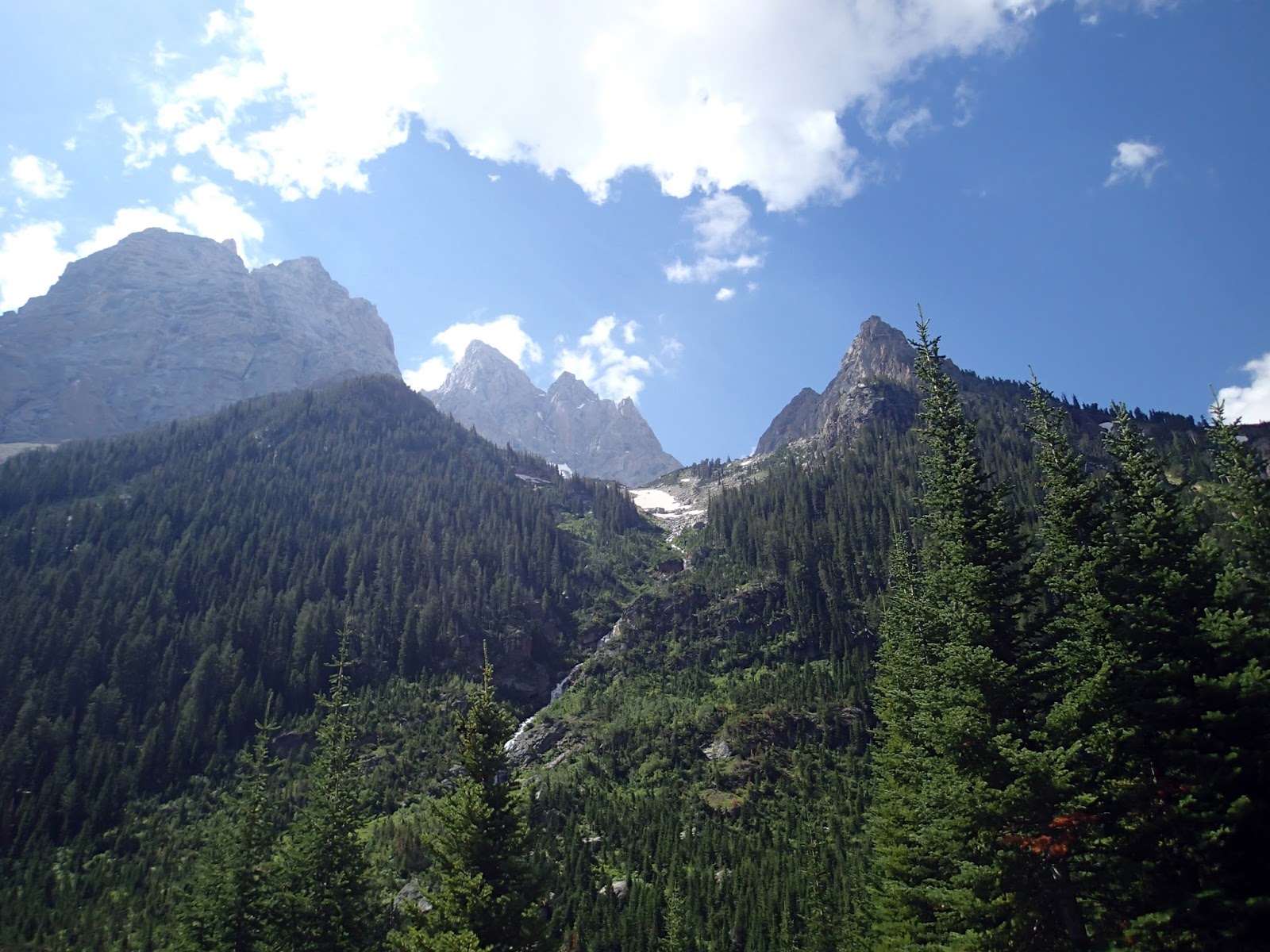 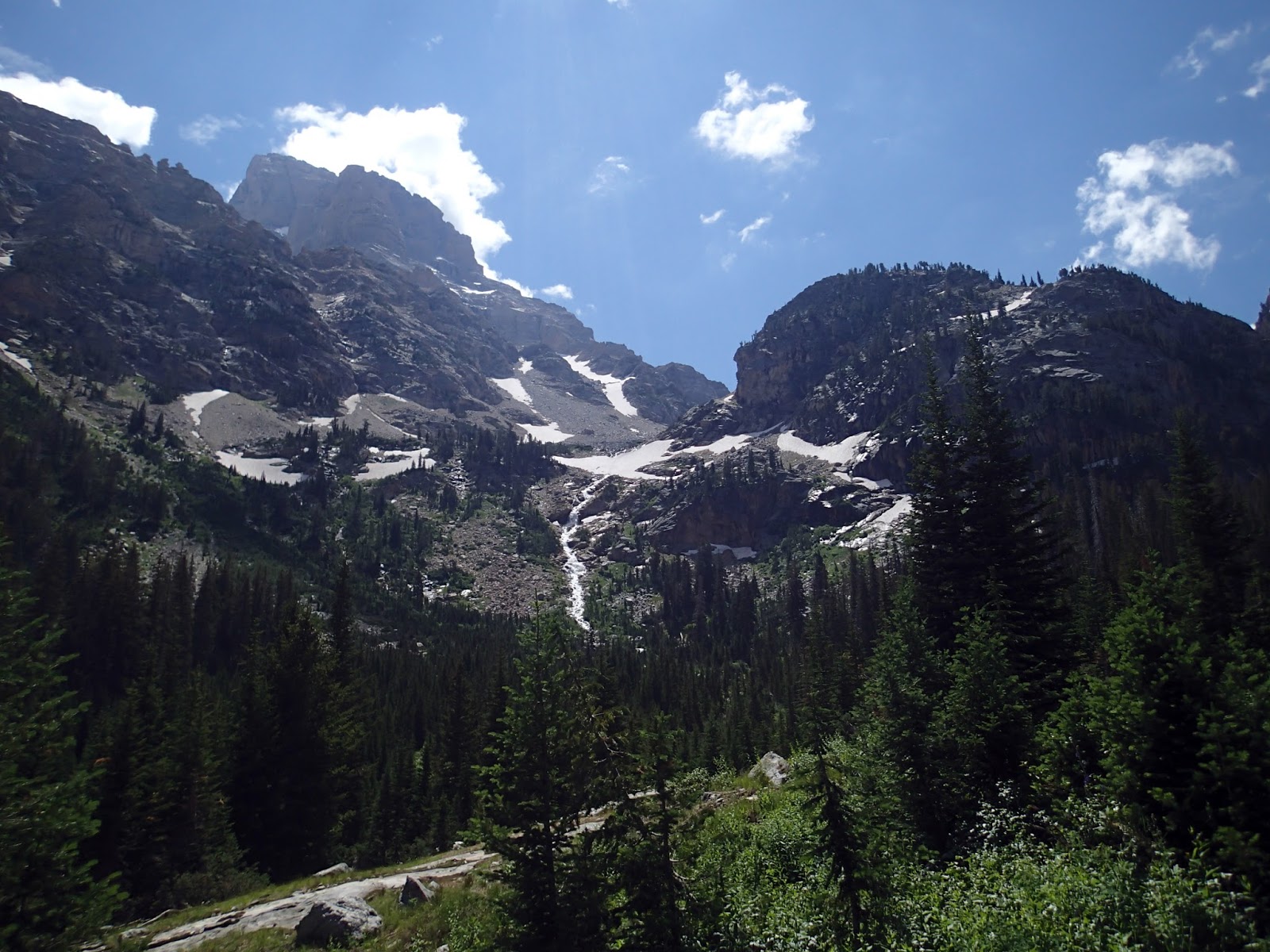 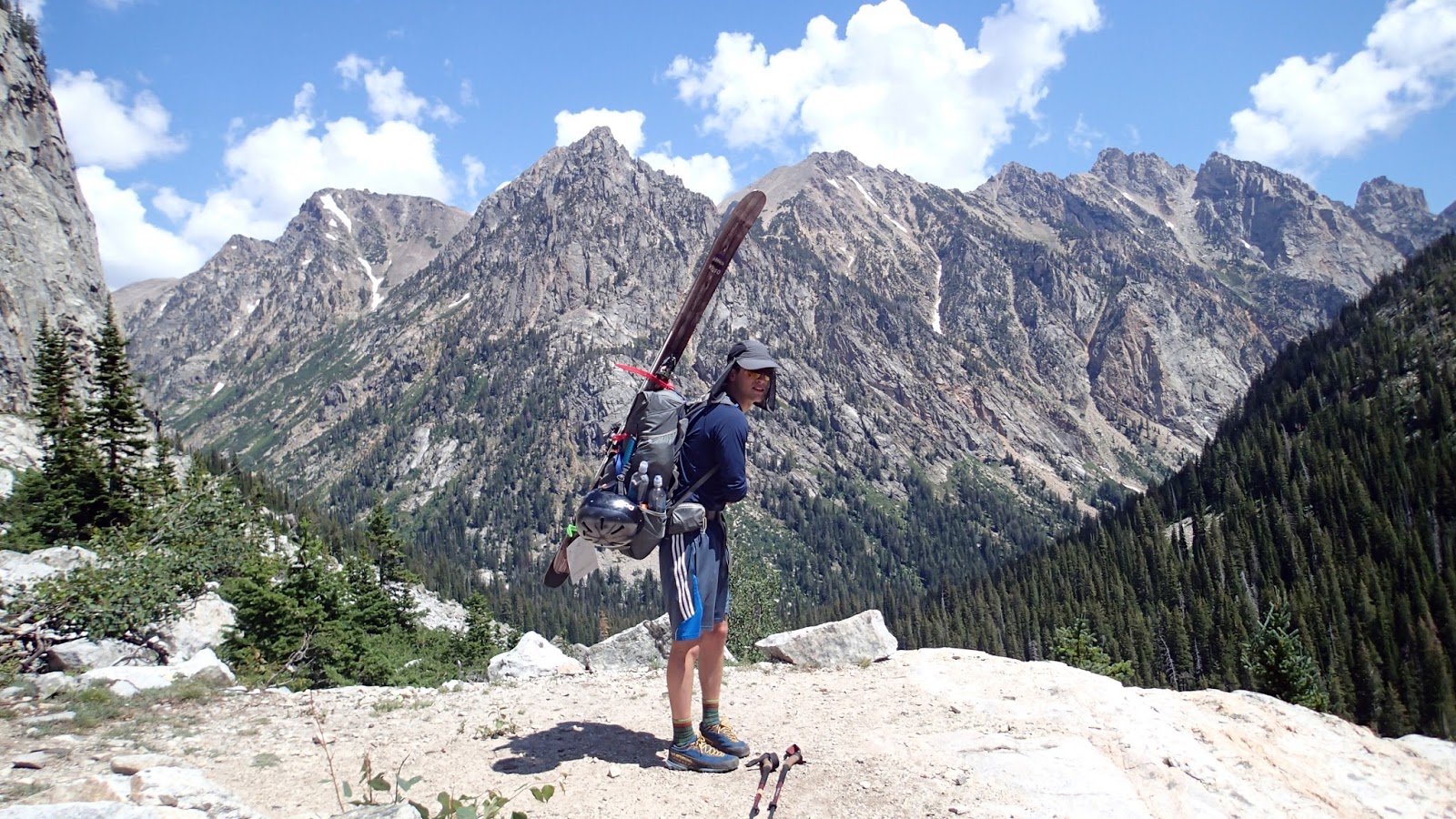 Thomas at the end of a switchback. Cascade Canyon to the right. 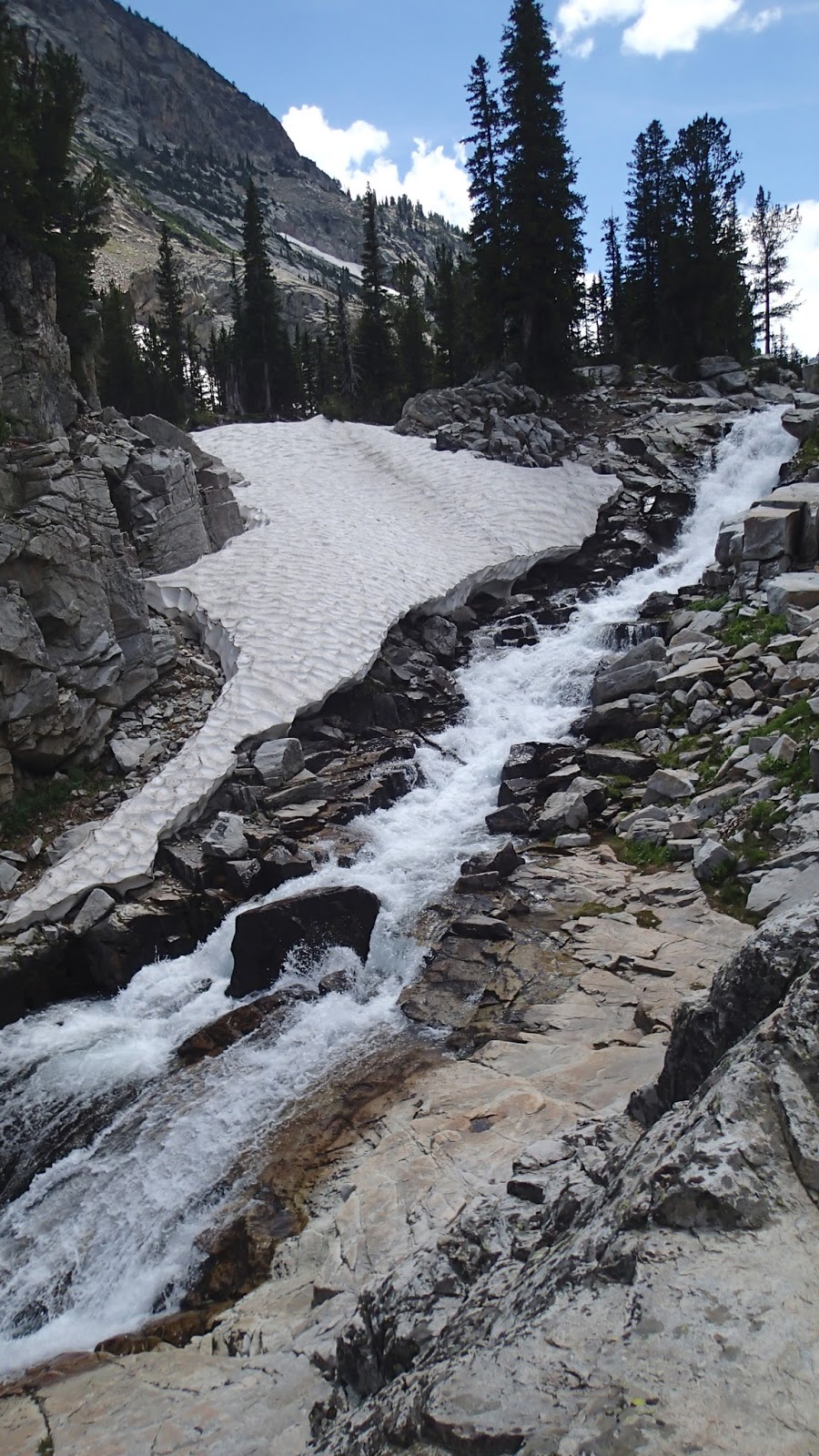 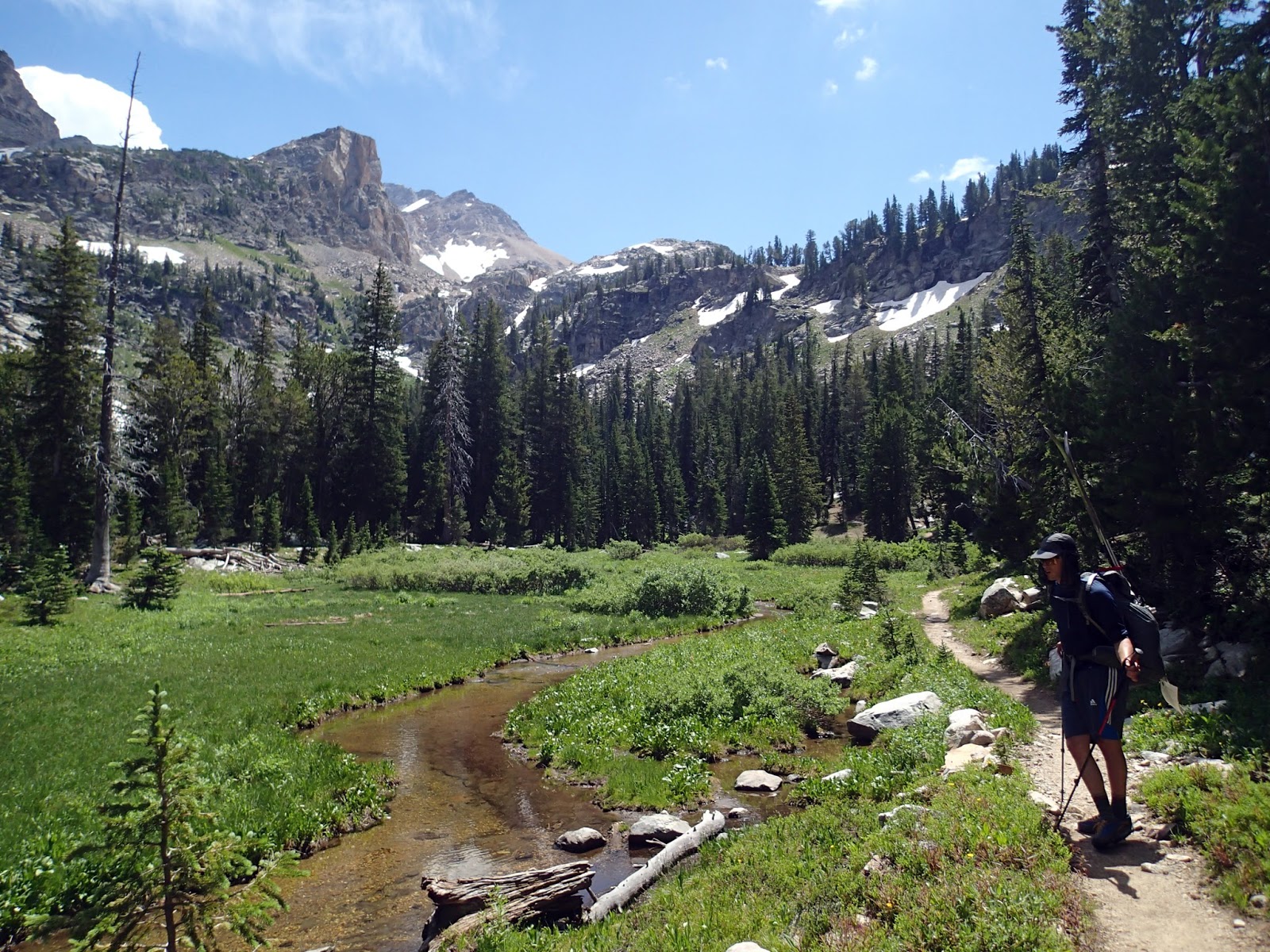 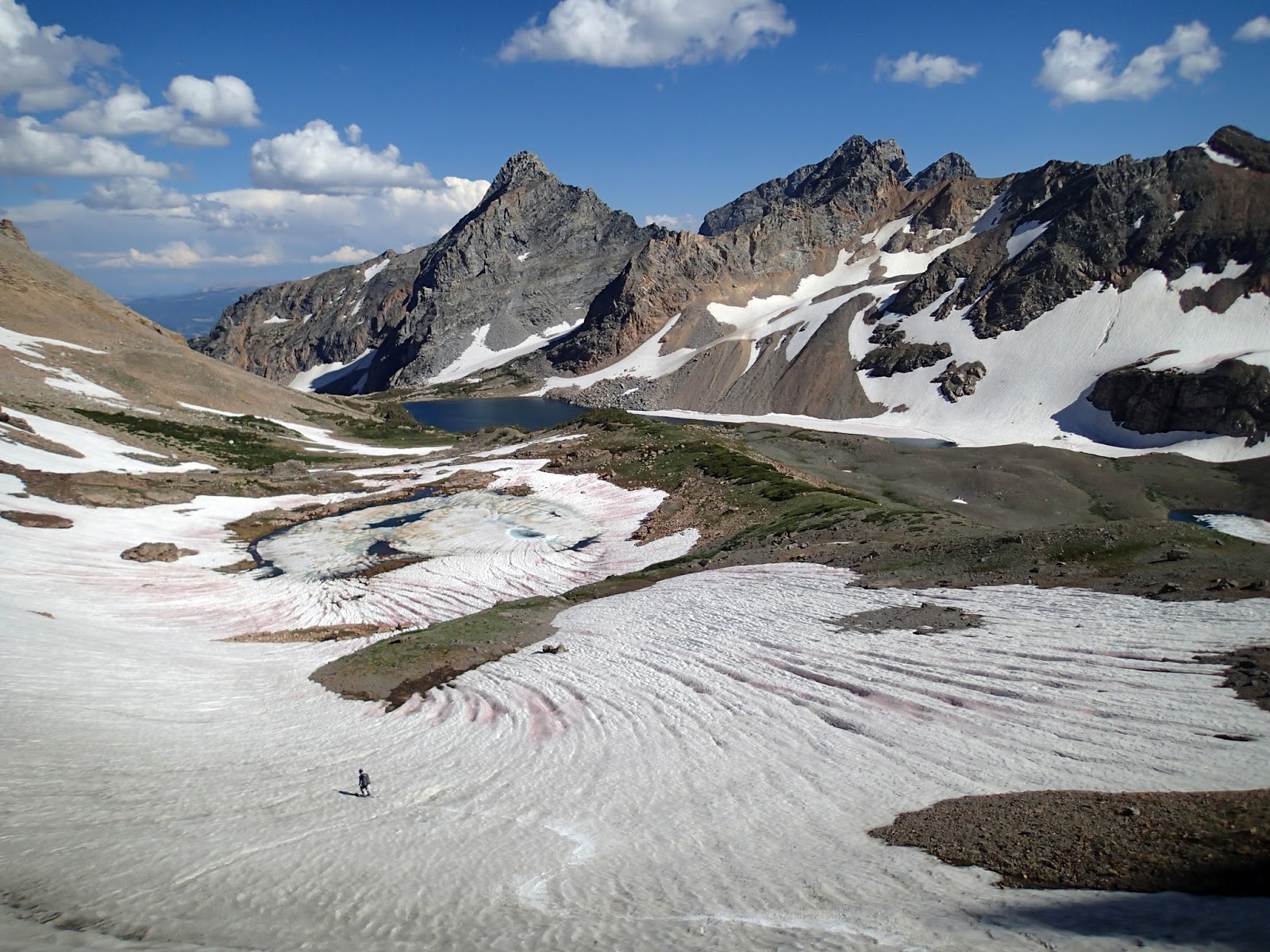 Skiing down from Avalanche Divide, looking down on Kit Lake and Snowdrift Lake out of frame 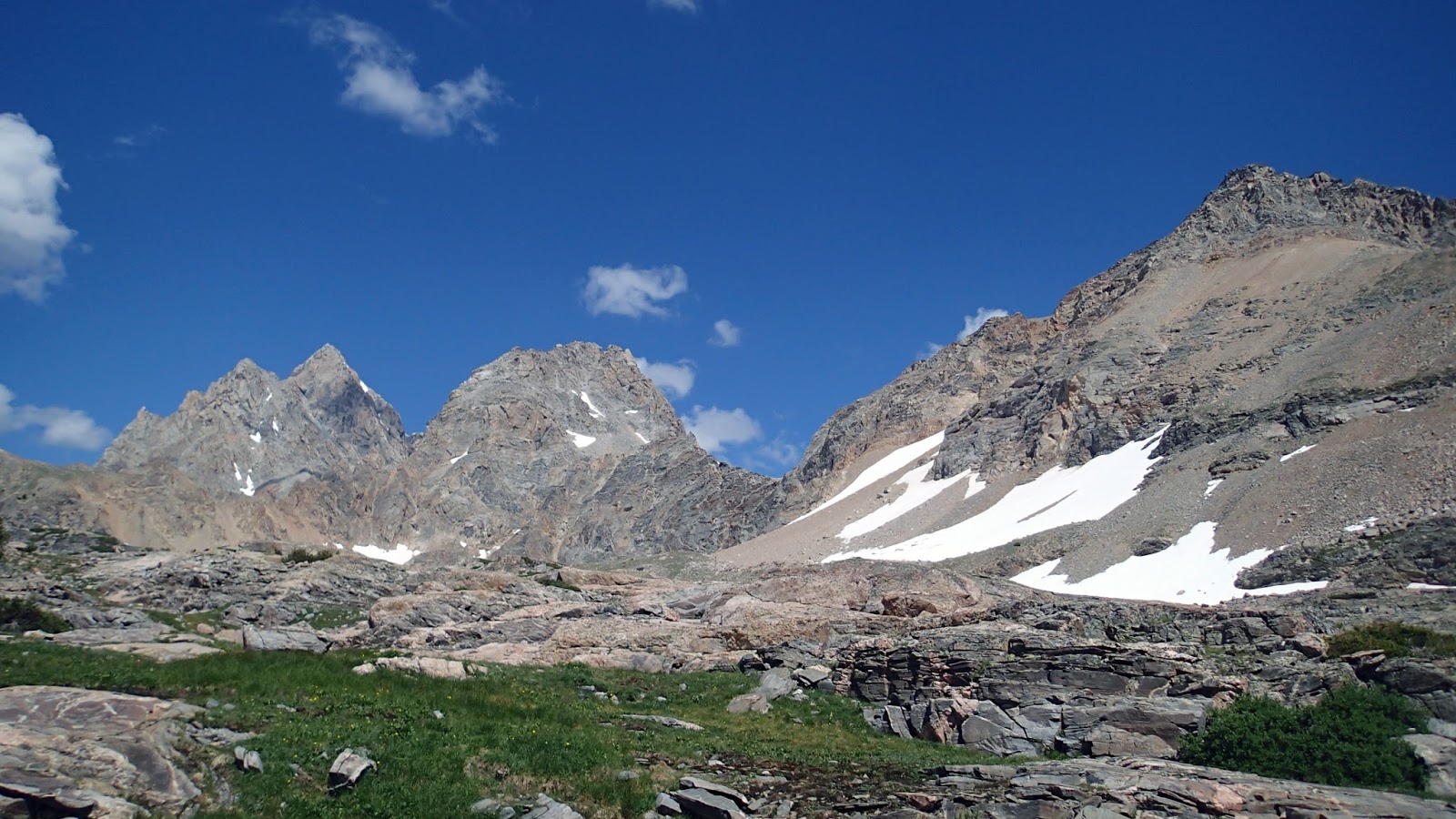 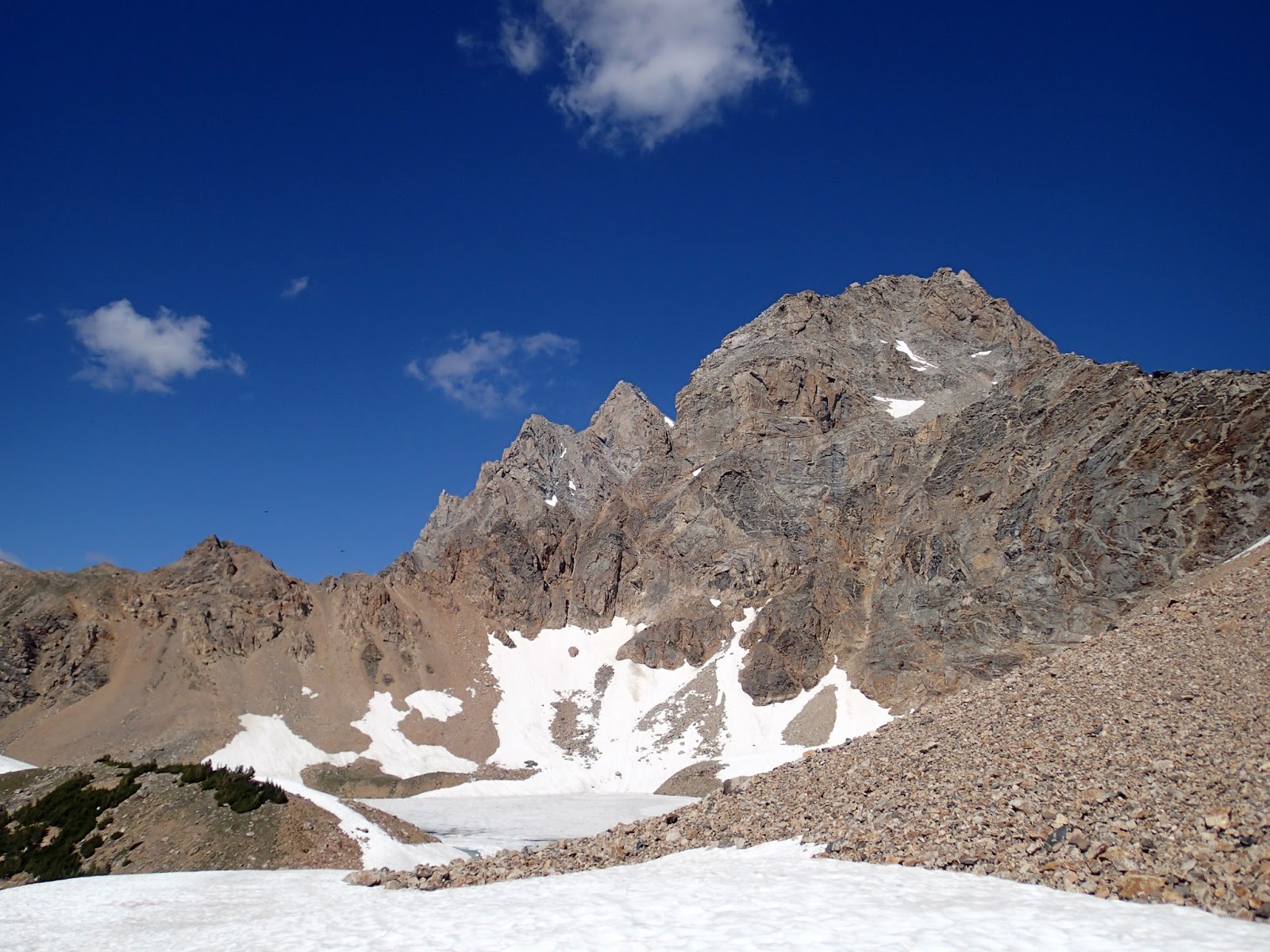 Icefloe Lake below the Middle Teton 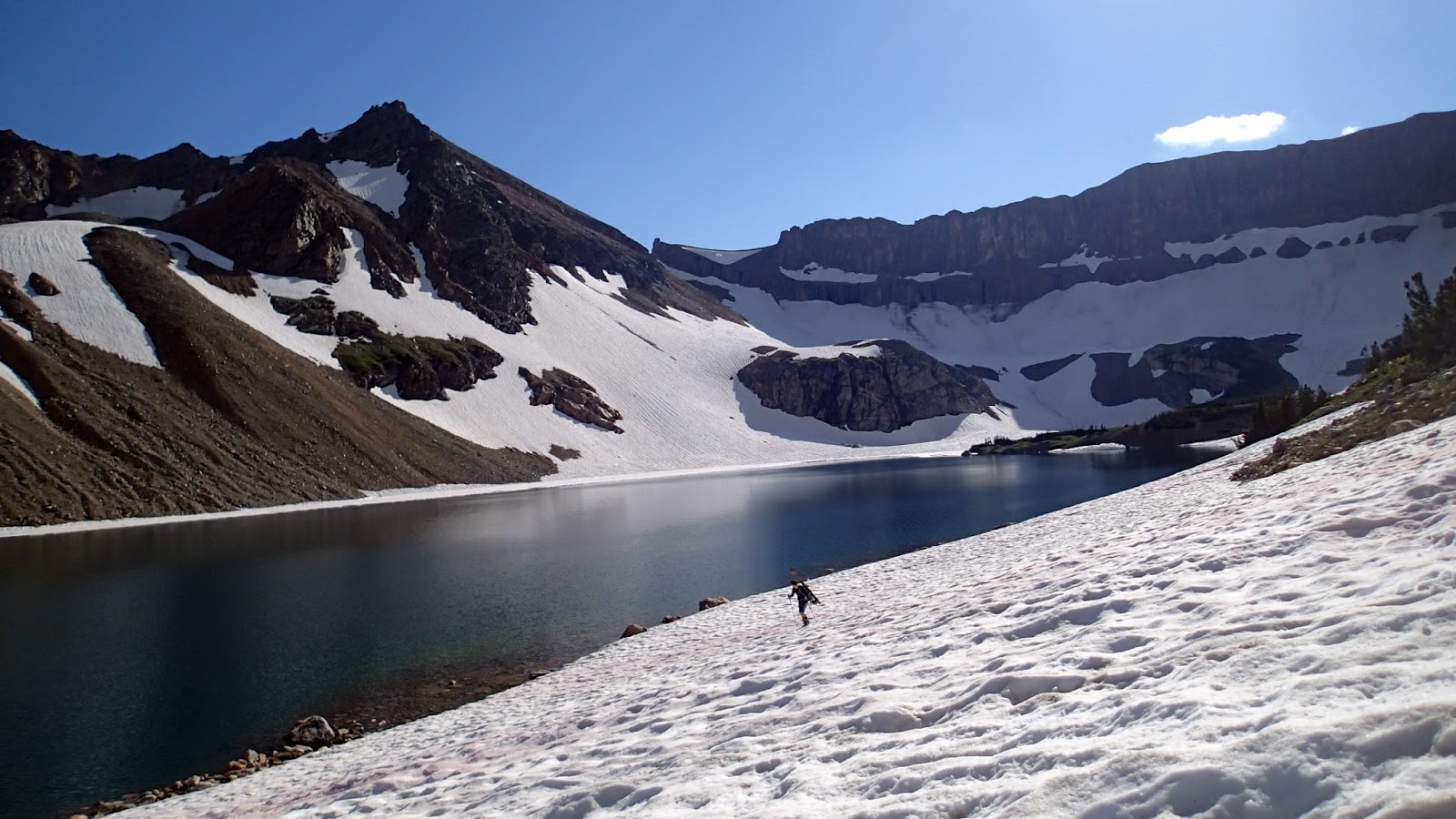 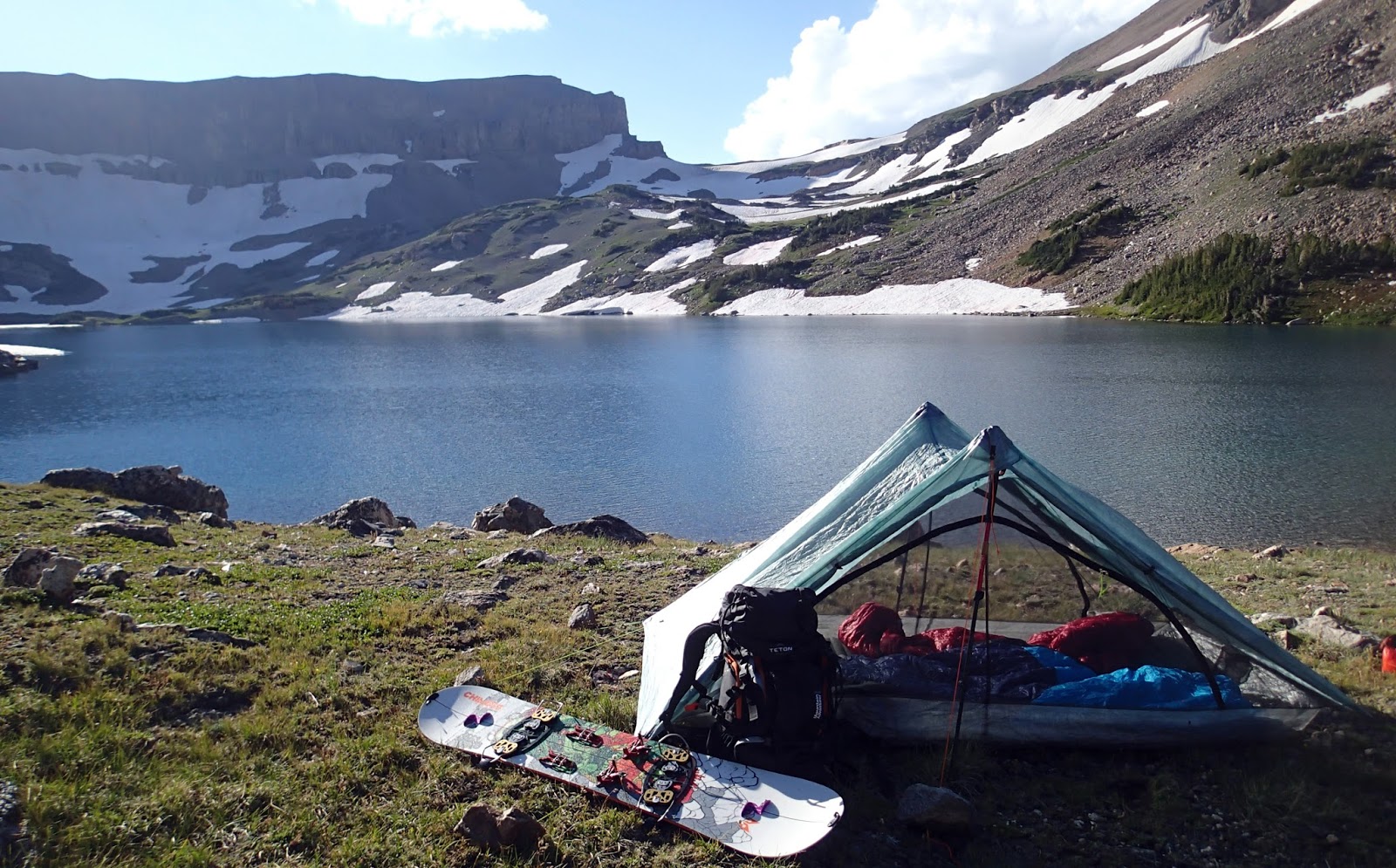 Day 2: Avalanche Canyon
Waking up early we headed up the obvious, and only, sliver of snow that would be worth skiing off of Veiled Peak. Taking a short hike up, less than an hour, we skied some suncapped snow that surprisingly was not as bad as you would think for a July 30th ski.

After skiing we packed up and moved down Avalanche Canyon - skiing the upper sections, bushwacking the lower sections through thick brush and trees, having feet engulfed into swamp lands and if I were not with someone who had been there before, not getting too lost.

It took about 6 hours to get out (I think, didn't keep a vigilant eye on time) and when we did hit the Bradley-Taggart trail, it was a sight for sore eyes (and knees). 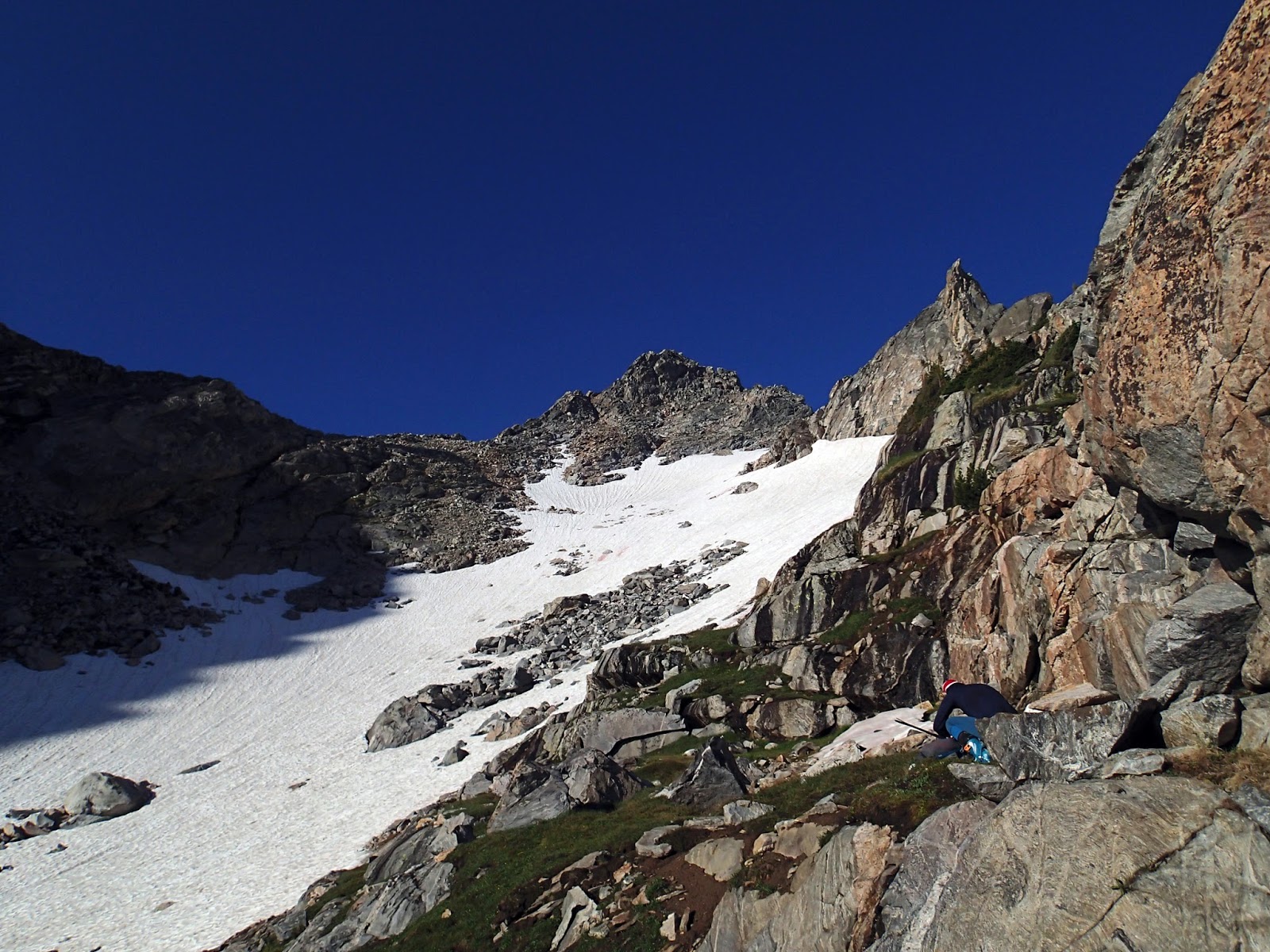 Veiled Peak and a ski line 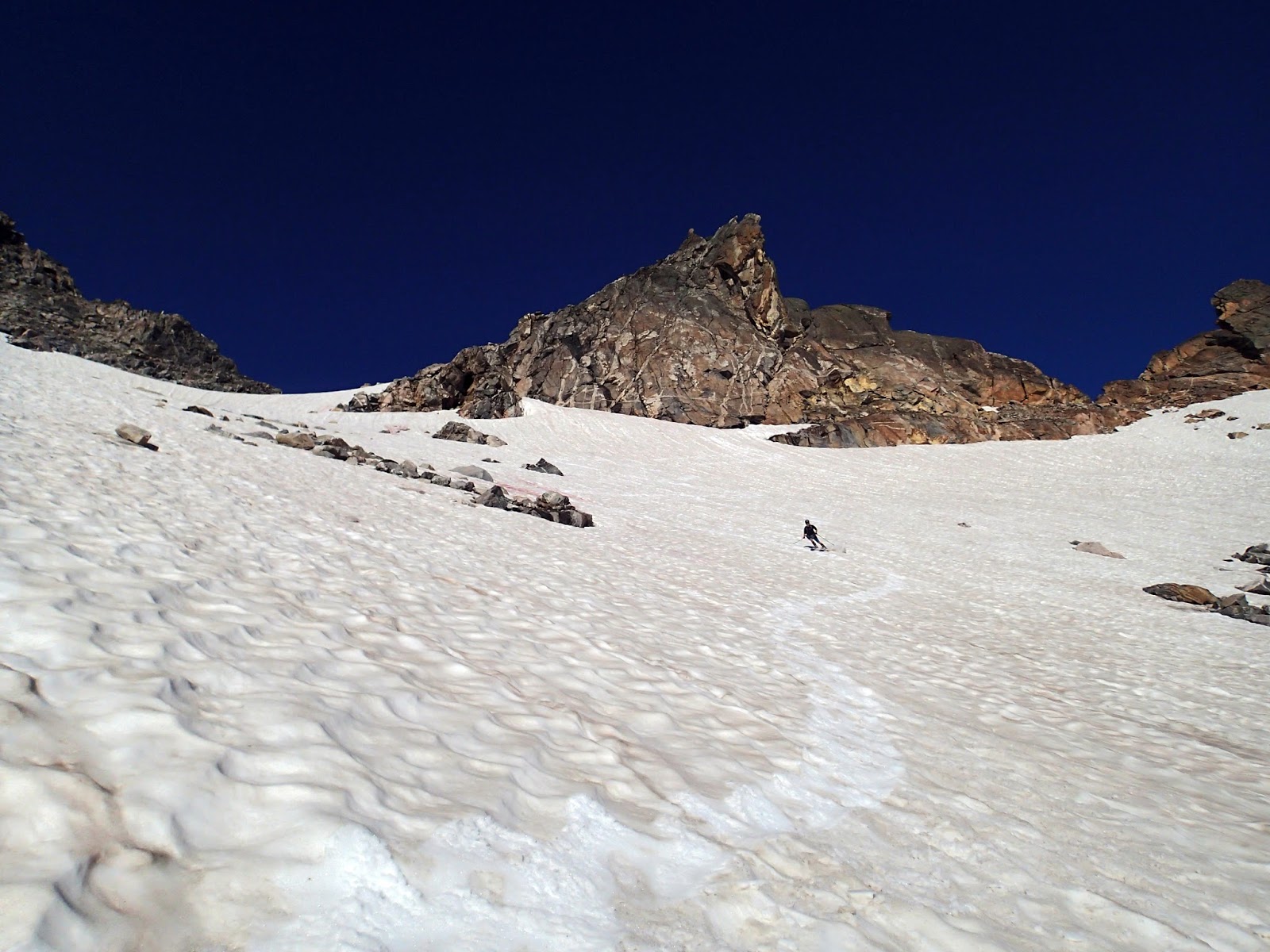 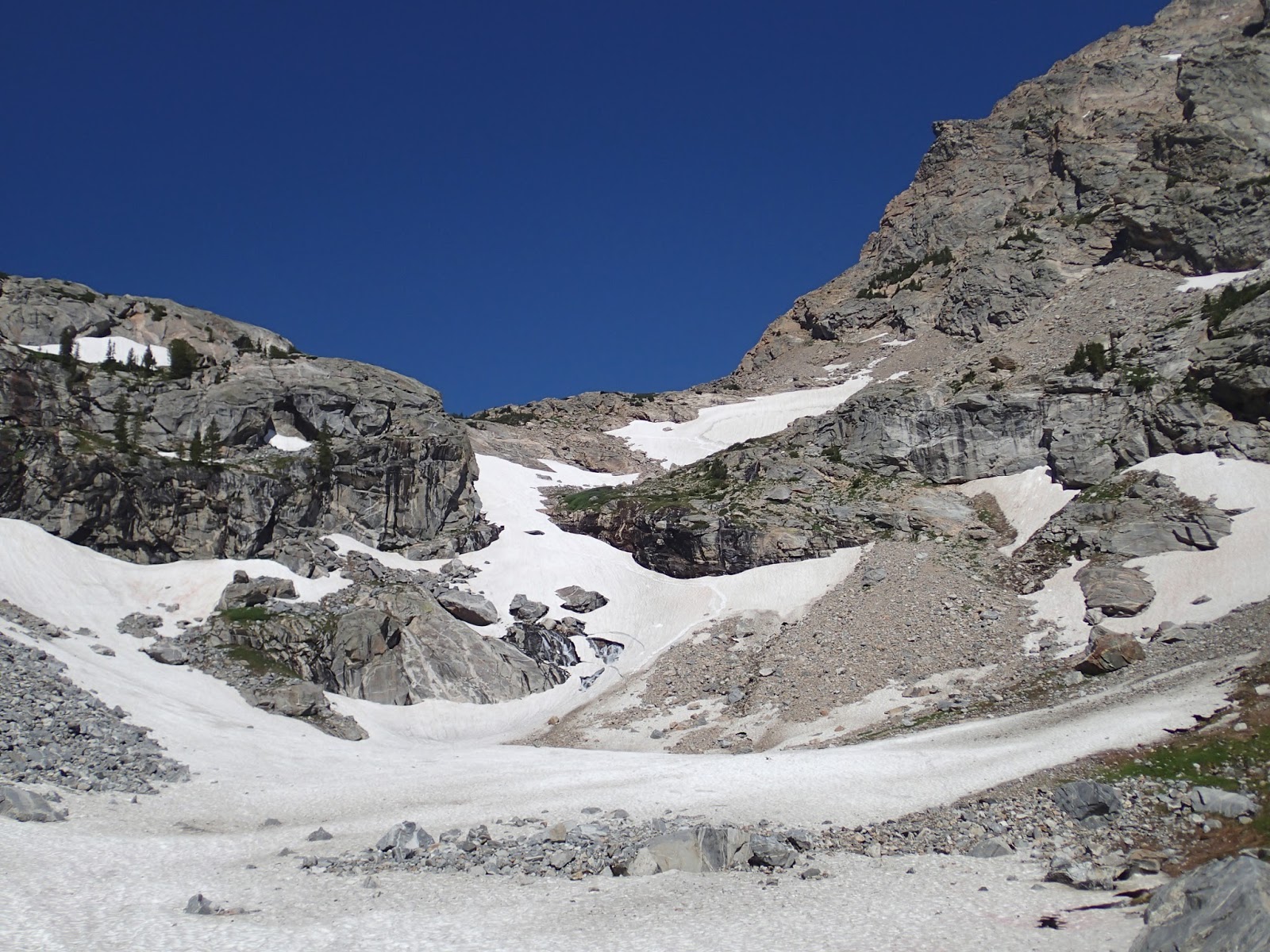 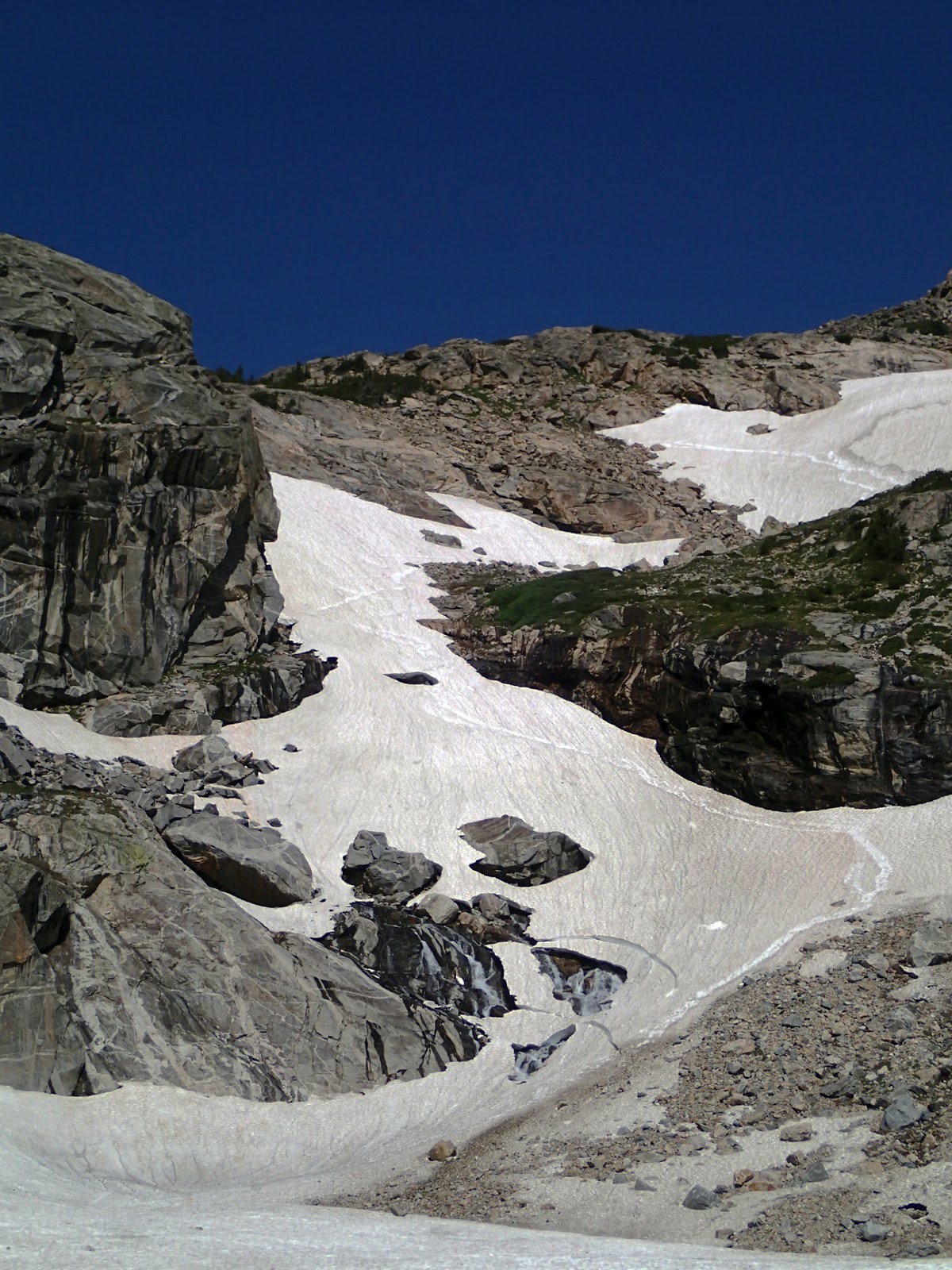 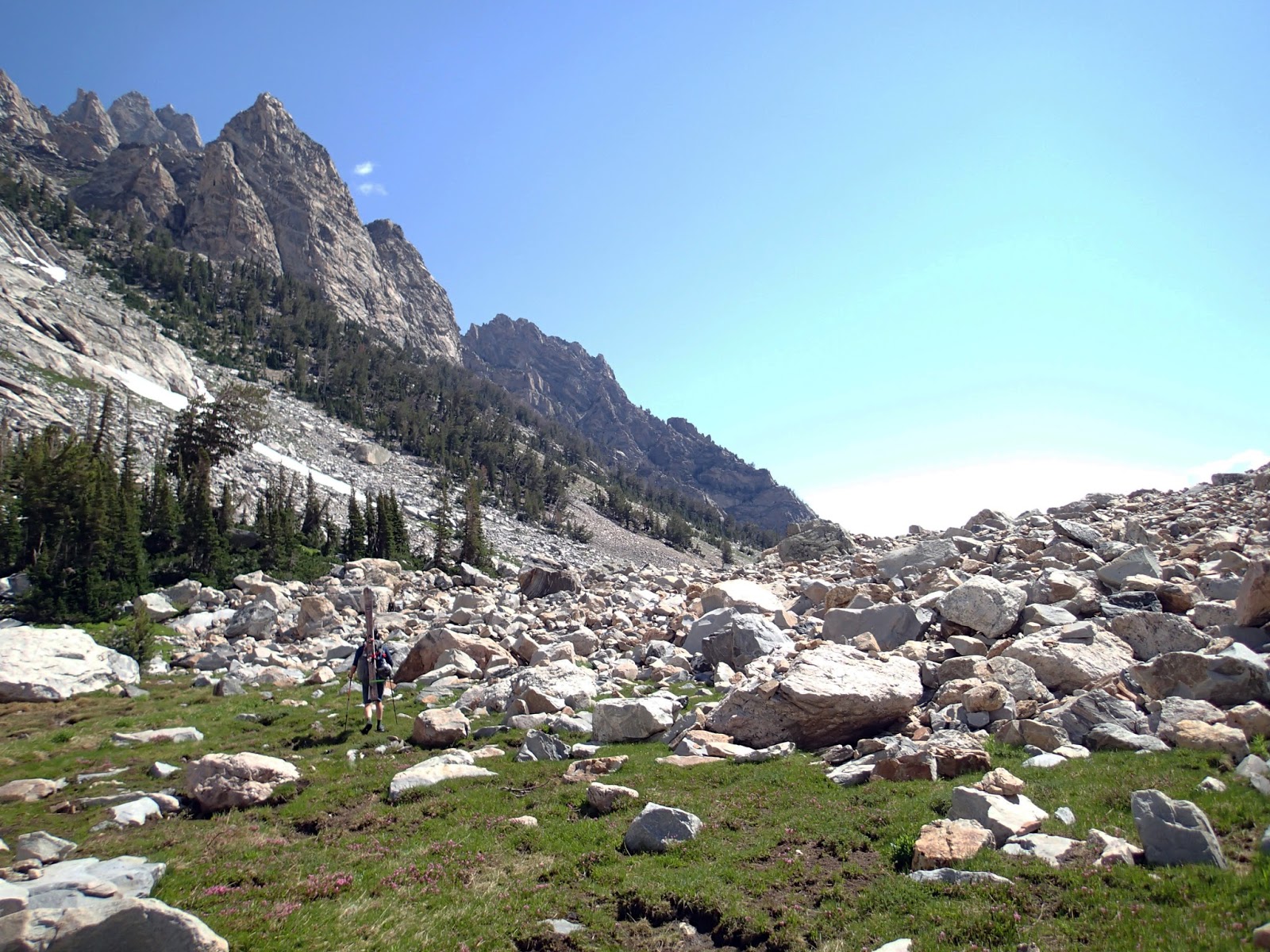 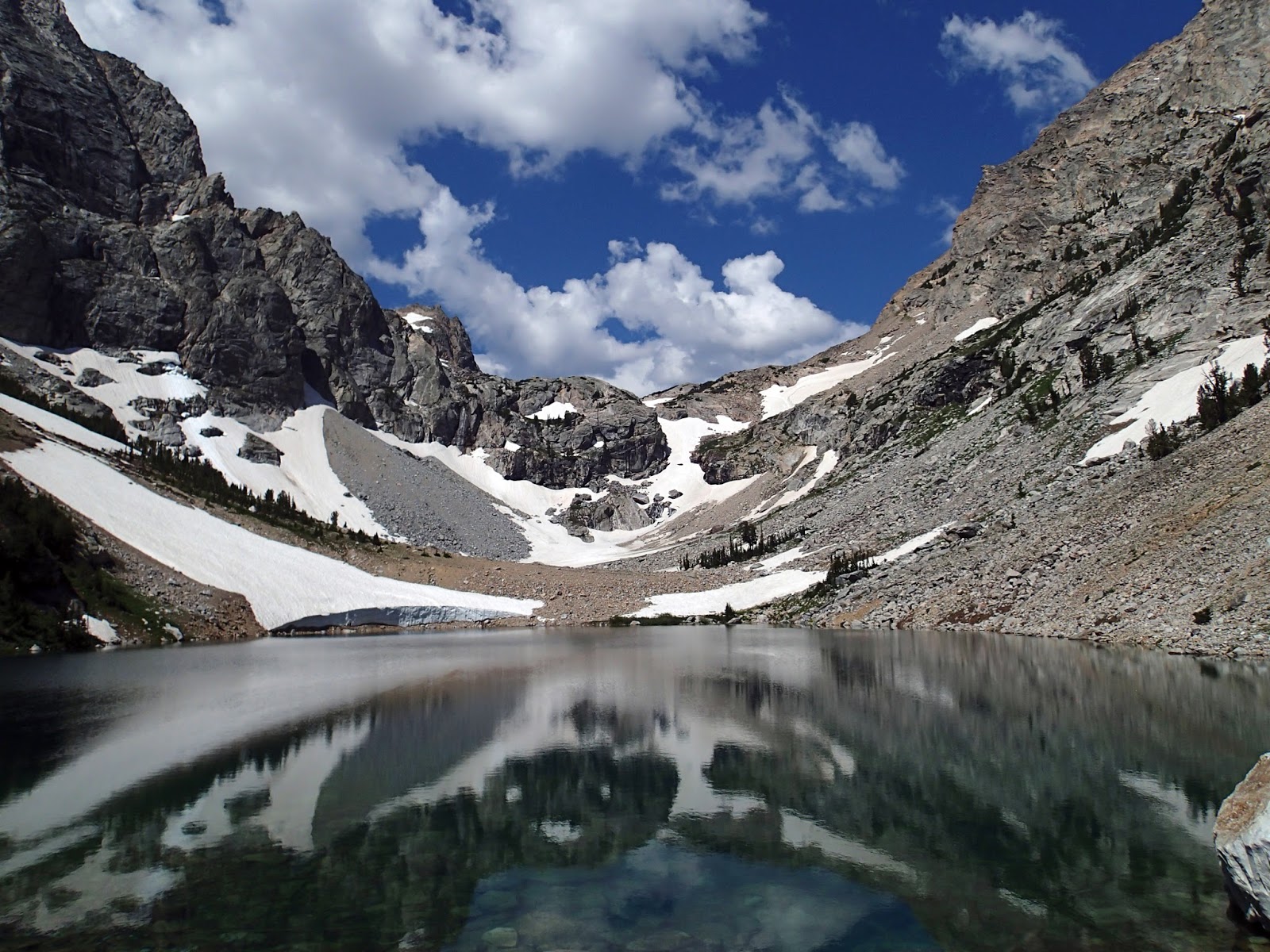 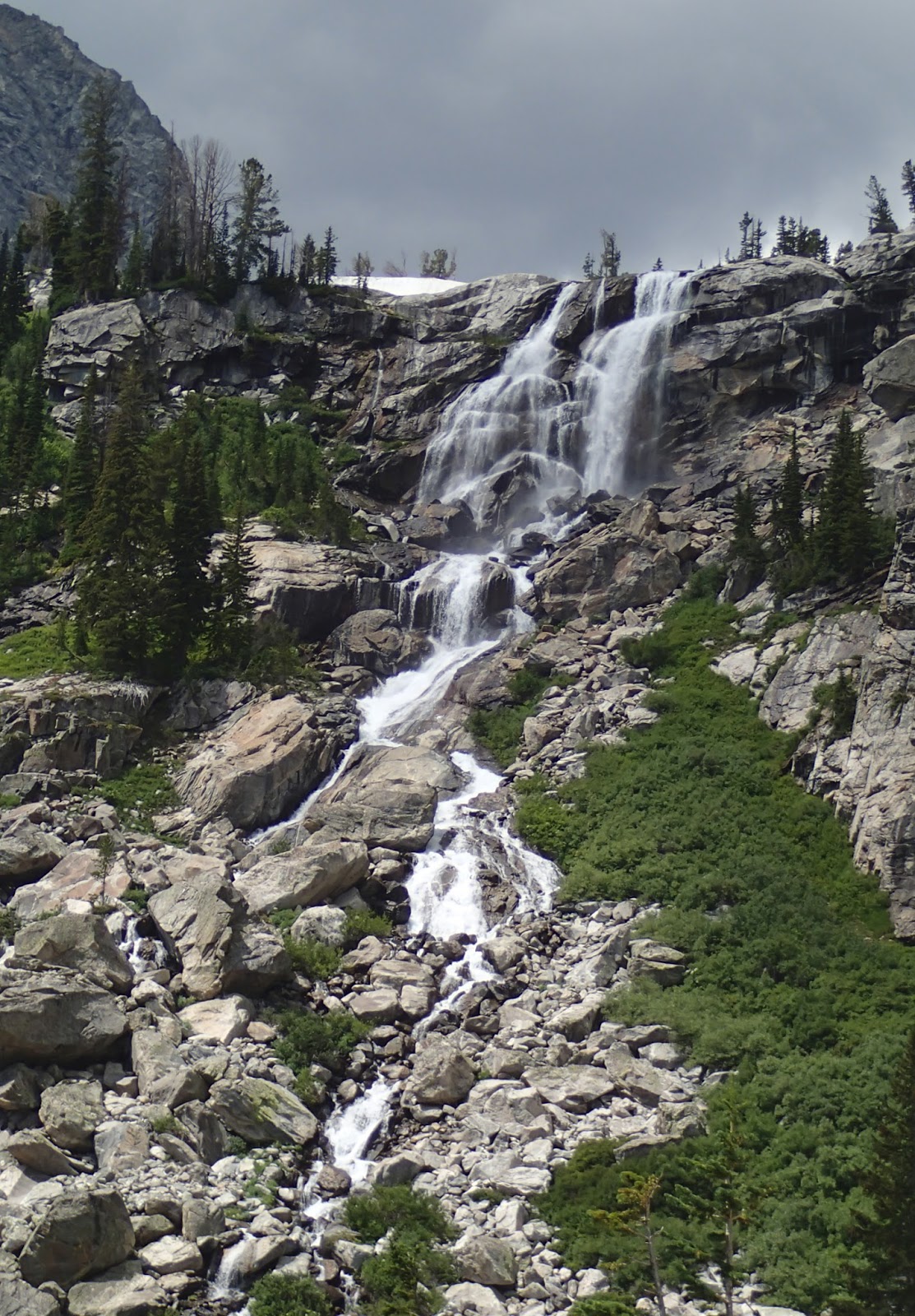 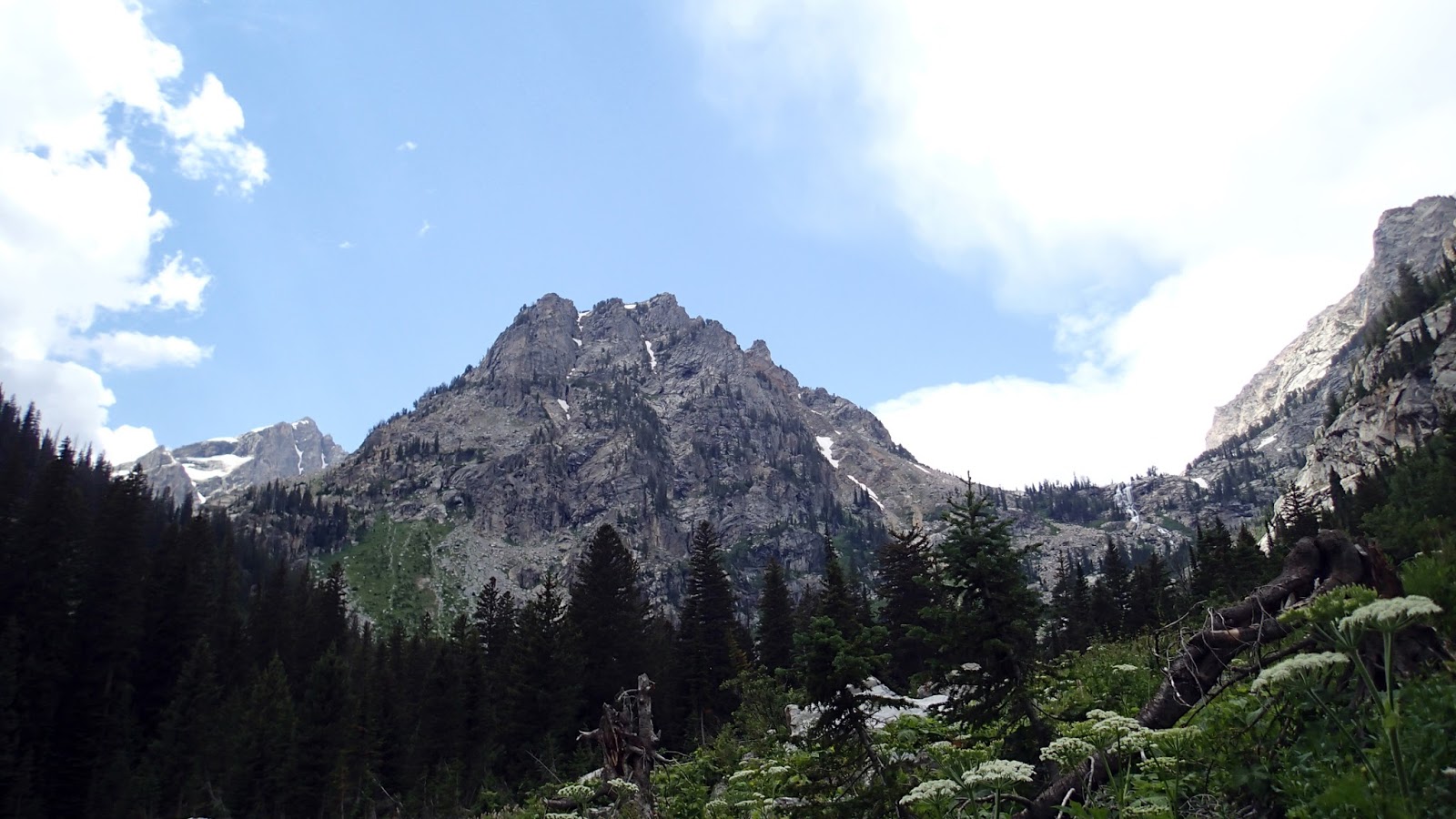 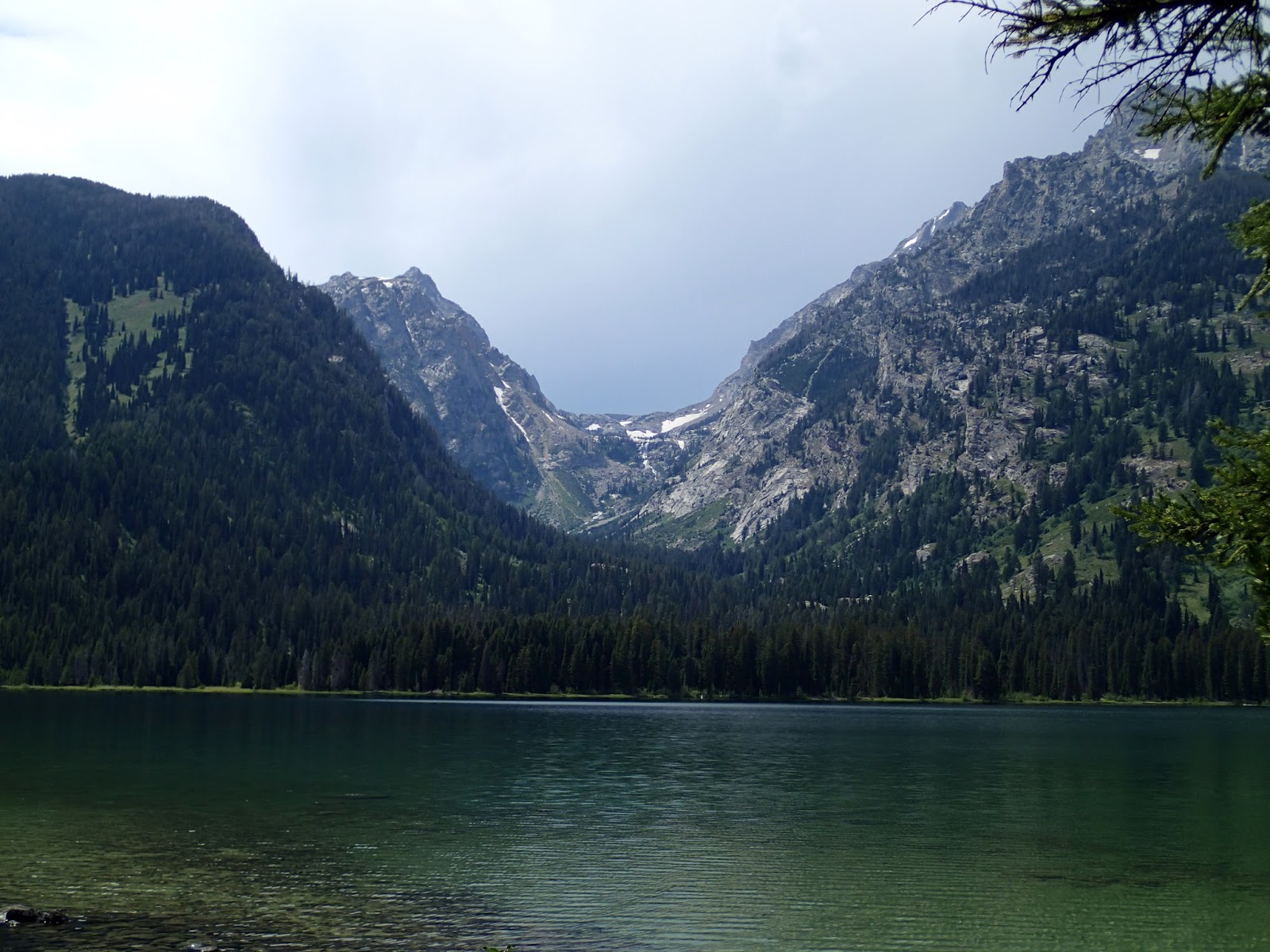