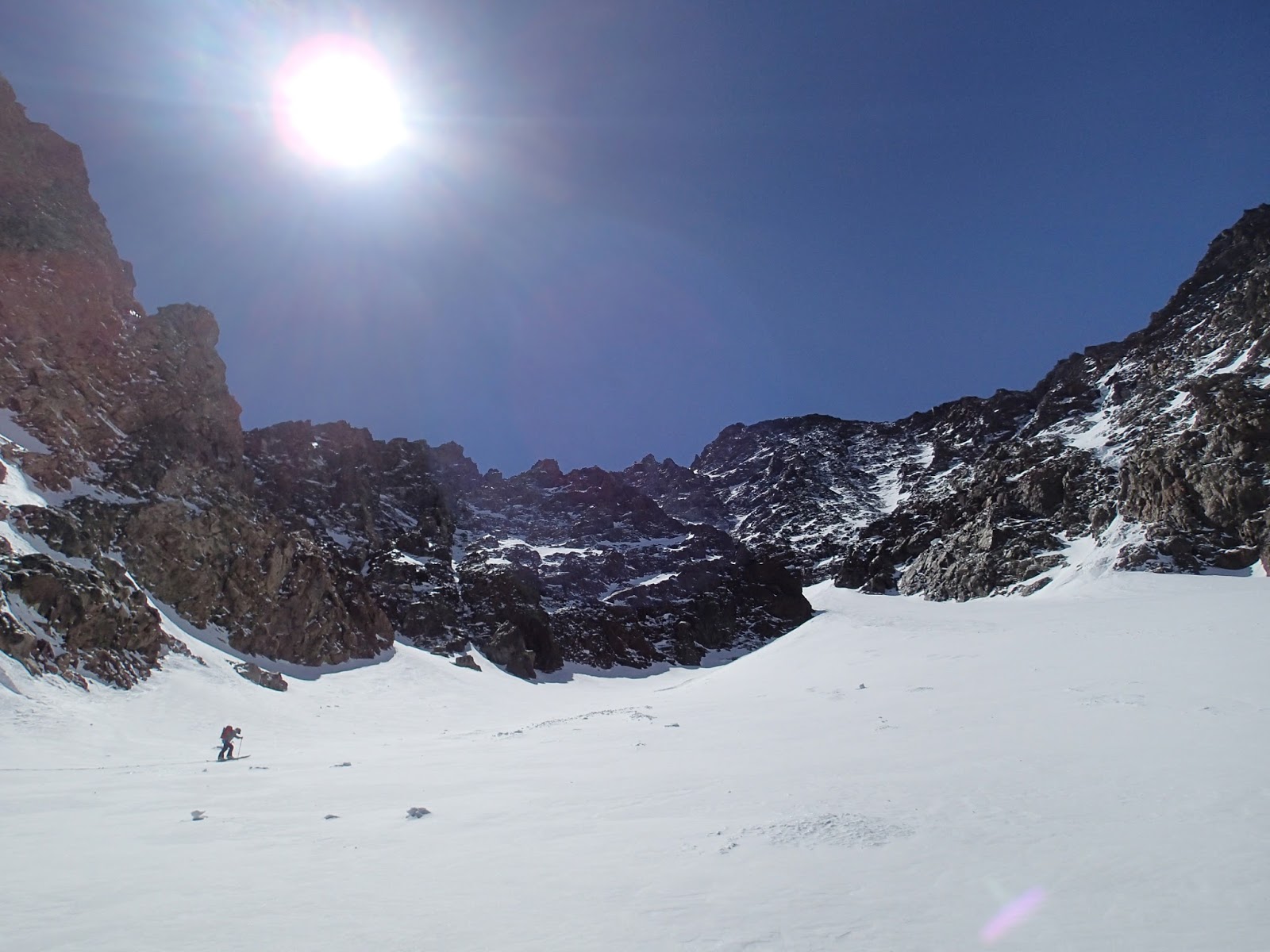 Turning 30 is supposed to be some monumental moment for most people. So I thought I would take that opportunity to celebrate it in a big way and travel to the Eastern Sierra in California, a place I had never been. You'll see that it wasn't a fully successful trip but it has laid the ground work for future trips that are already planned.

Driving down from Wyoming to Salt Lake to meet up with a couple of buddies who would be joining to California on the 12 hour drive, I couldn't help my mind from wondering what we were going to ski. In excitement of the unknown, I really didn't care. I also had no idea what to expect besides what I had read in the guidebook from Nate Greenburg and Dan Mingori. Guidebooks are simply just a note though and I can never fully fathom what I am getting into until there. At any rate, here's my log. 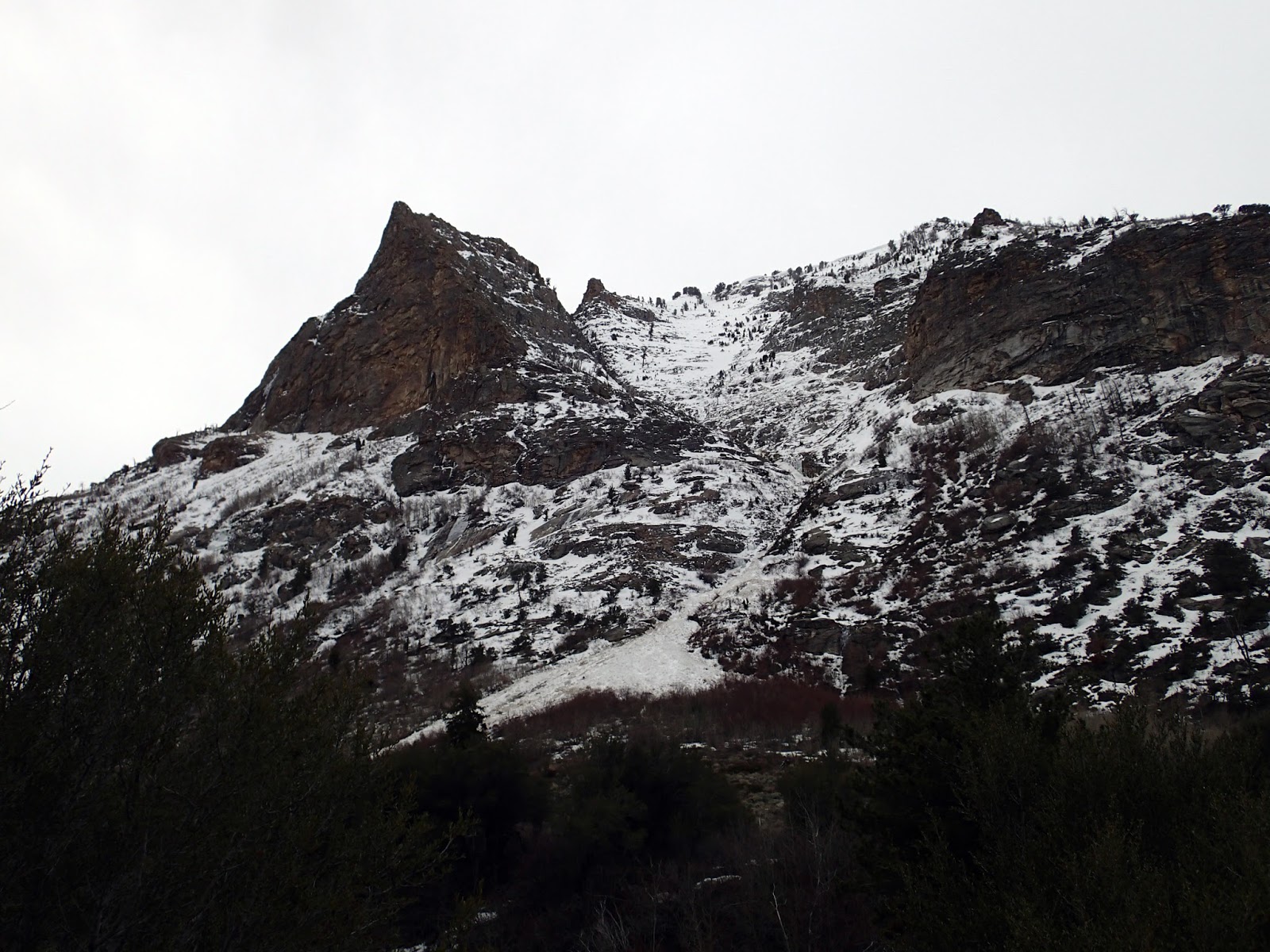 From SLC we traveled to Elko, Nevada to get some redemption in a couloir that almost killed me in the most bombproof conditions. Climbing into the couloir we found different conditions than last time. It was icey, showed signs of recent avalanche activity and we anticipated not that great of skiing. 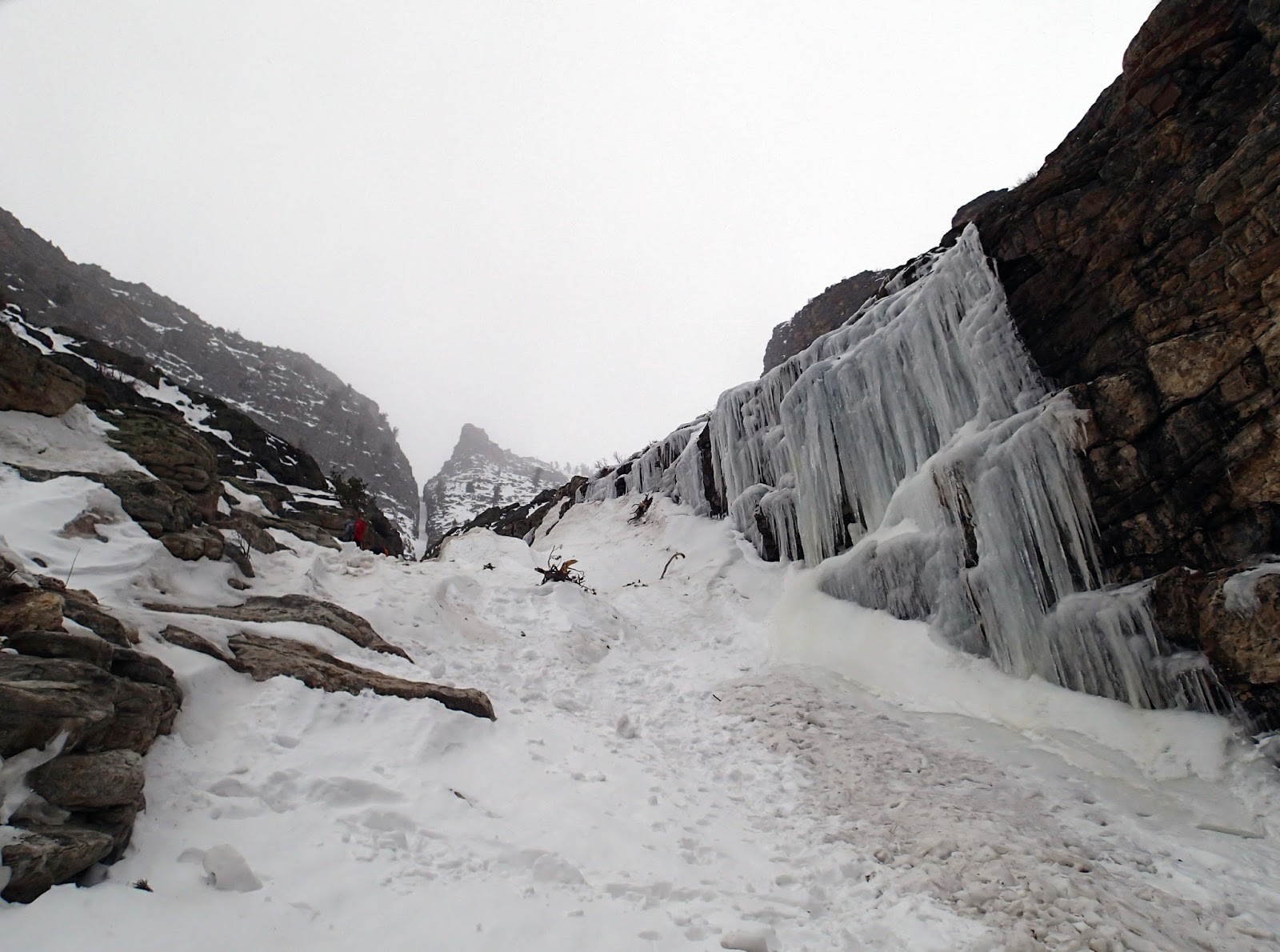 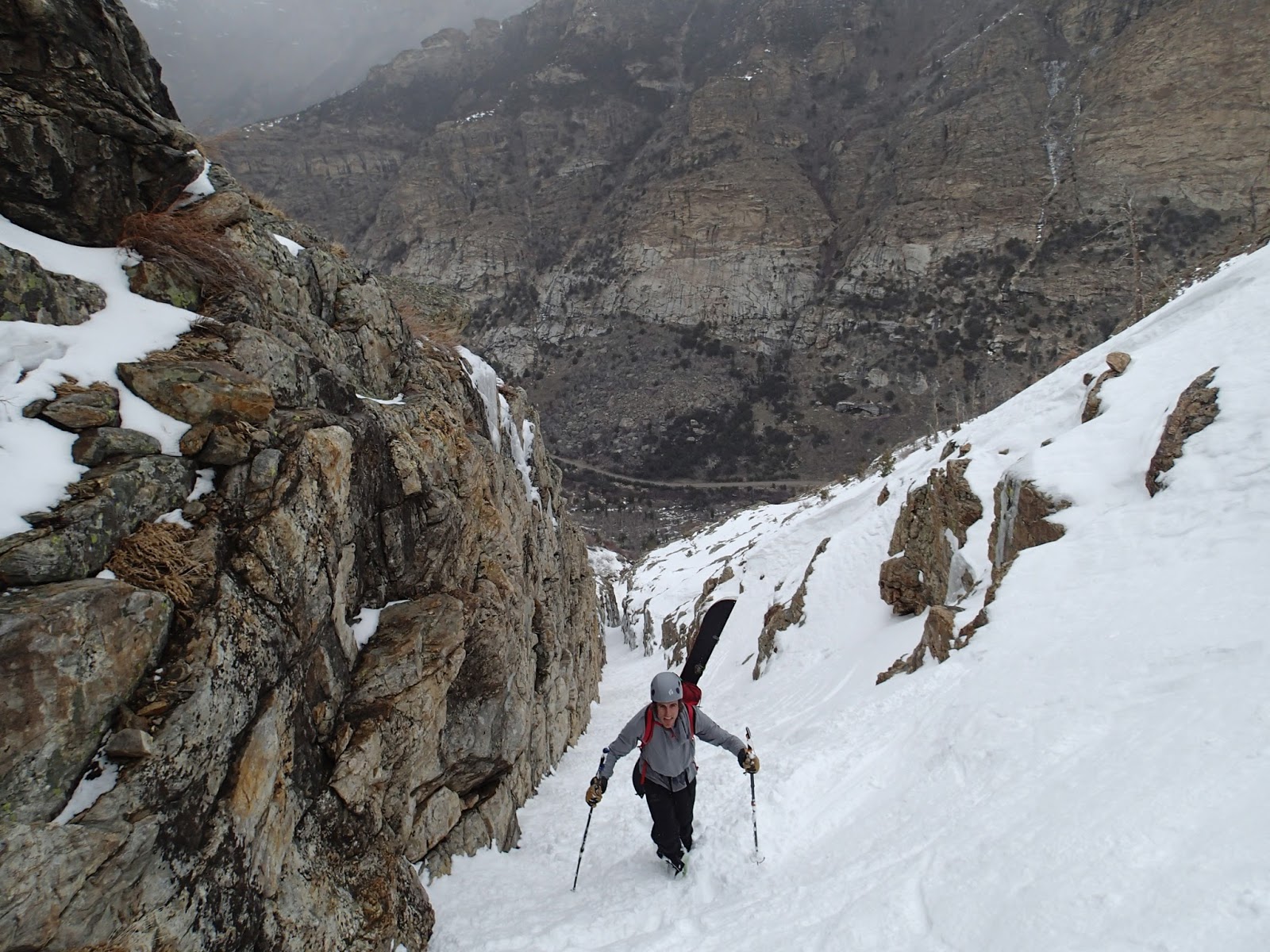 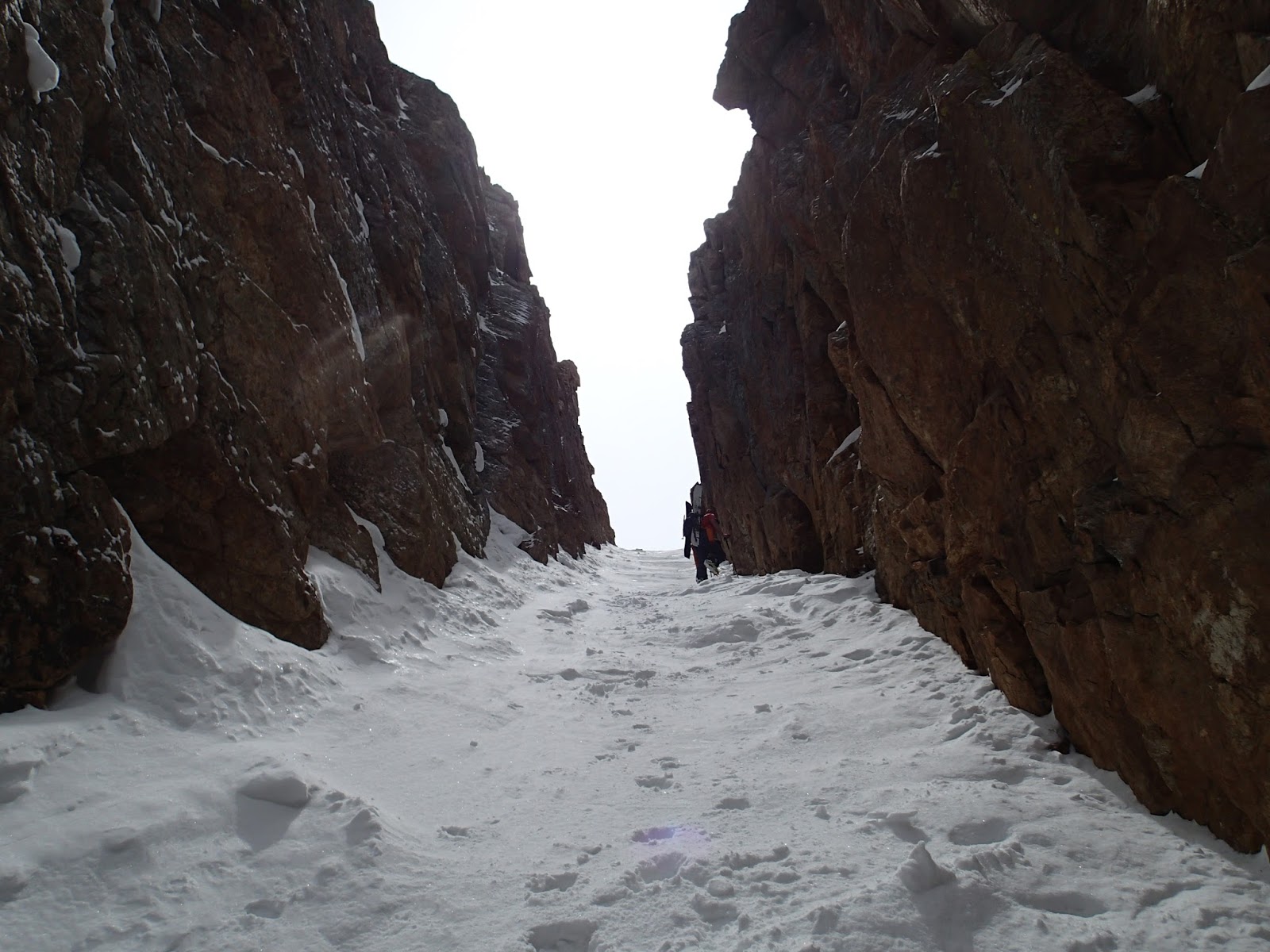 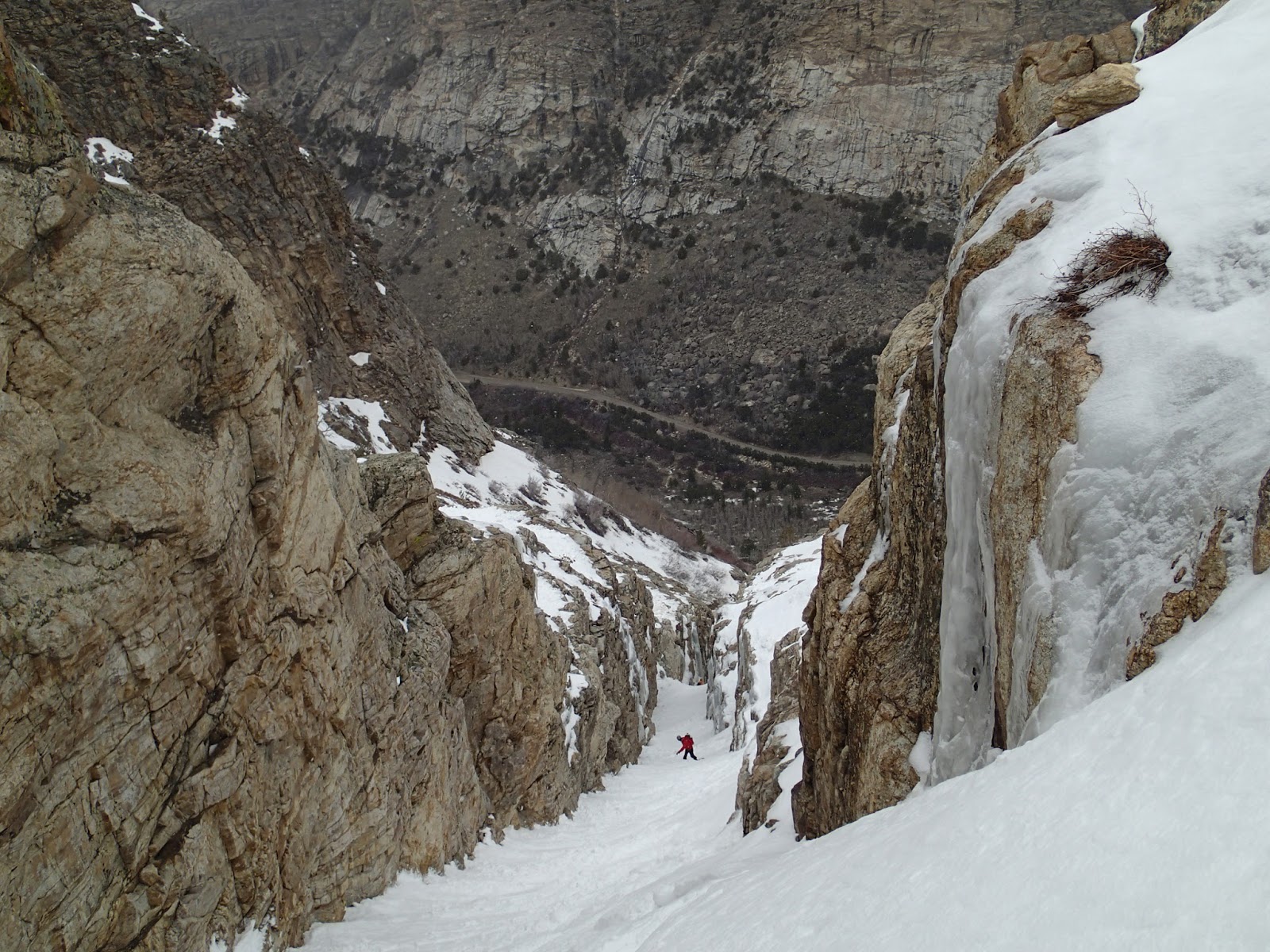 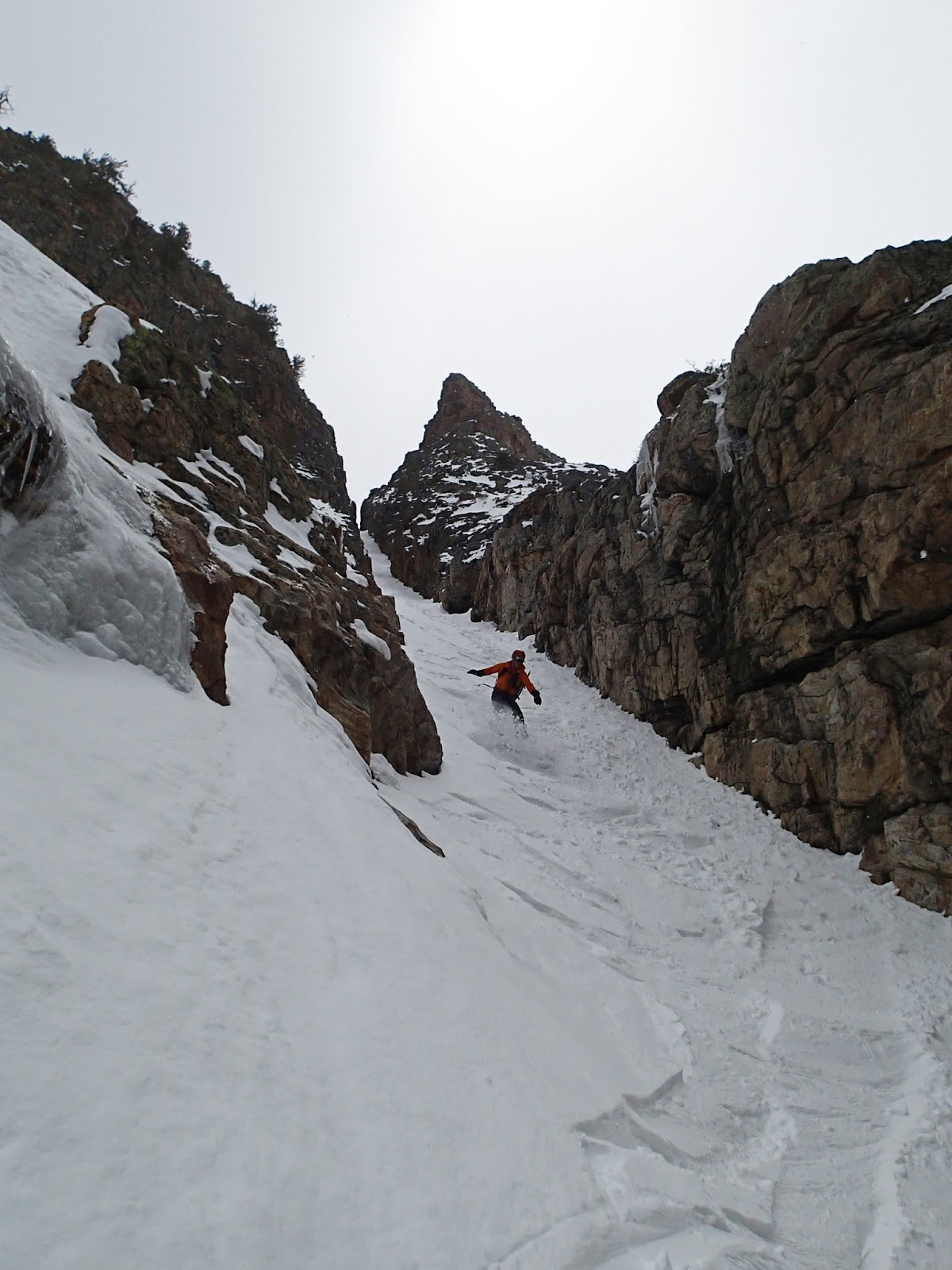 We got to the top, switched over and dropped in. The top was trash as we jumped turned through it but the middle was a surprisingly a solid run until we hit the "ice cave" that had drop bigger pieces of ice into the couloir.

It felt good to tick this one off. I typically never say never but I can say that I may never go back there again. 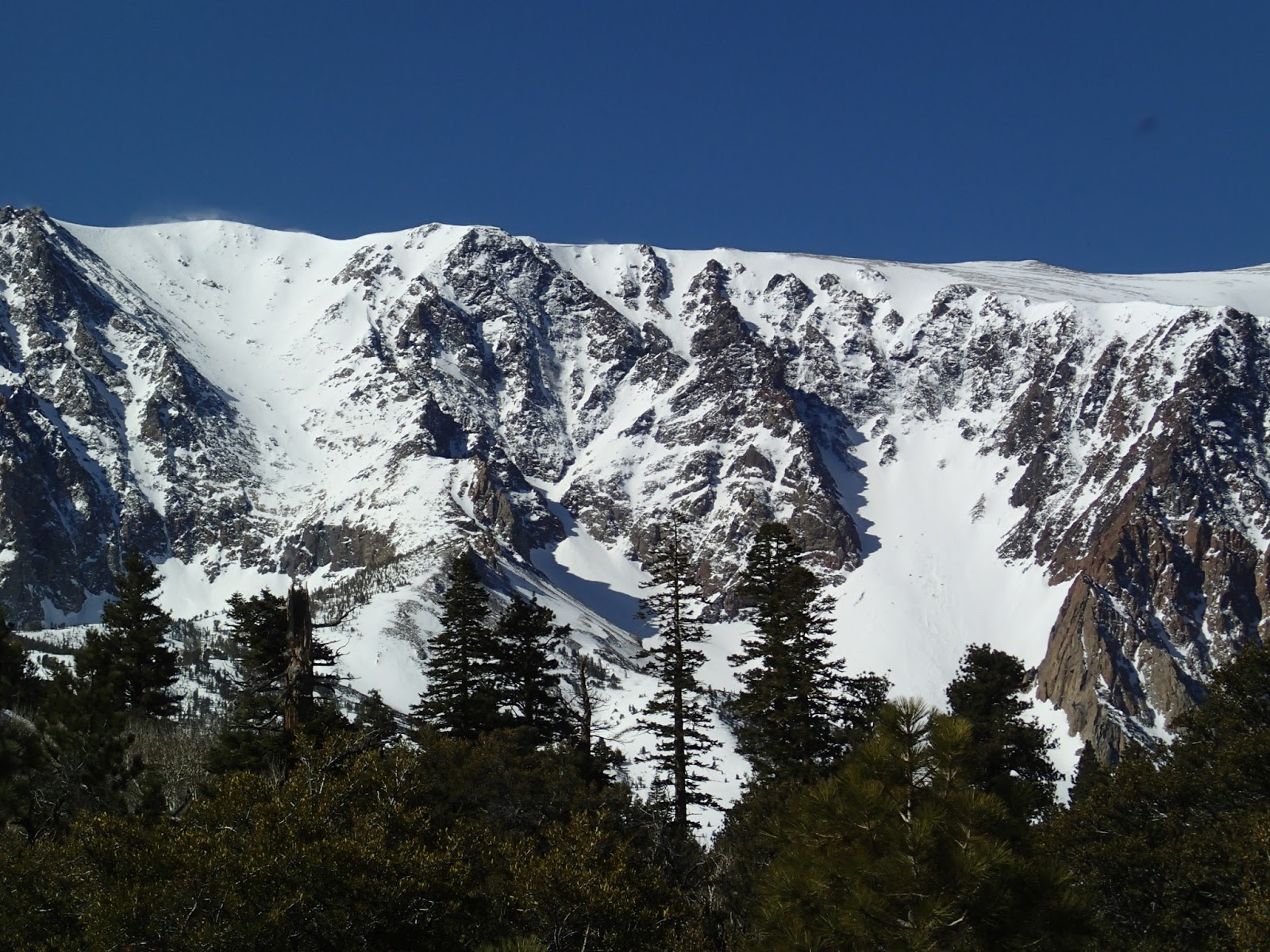 Our first day in the Sierra would be a turn-around day because of unusual circumstances. We had spent an hour and a half on a dirt trail with skis and boots on our backs, which is a heavy pack, that would take us to the snow line of Mt Wood where the Z Couloir is located. What an astethic line it is! Probably why it is in the 50 classic lines book (or maybe it isn't I'm not double checking that info while writing this).

We skinned for a couple of hours, switched to booting at the apron of the couloir and heard something I've never heard before.

"Ah, okay what is that?" as I was stopped in my tracks in a not-so-great place. The crew was above me, and they stopped as well, discussed options and tracked back down to me. What could it be?

The pack settling under us? Maybe but that would be quite the noise for that.

Avalanches on the other side that was East facing getting baked by the sun in 60 degree temps? Maybe?

Earthquakes? Possibility since it is California.

Maybe, just maybe it was from Hawthorne, roughly 70 miles East of us. Hawthorne, Nevada is a site where retired munitions from WW2 and such are stored, and later disposed of. By blowing them up. Apparently, they picked Hawthorne because it was too far inland for Japanese bombers to reach, and it was in the middle of nowhere. That link is worth a quick read if you are into that kind of stuff.

Moving back into skiing. After hearing loud, unknown booms, we got the hell out of there quickly. It was disappointing to not tag the Z but even in hindsight how do you plan for something like that? AND IGNORE IT. I would of been real paranoid in that couloir the whole way up.

We still got 3000' of skiing, that was actually surfy powder. I'll take that as a win. 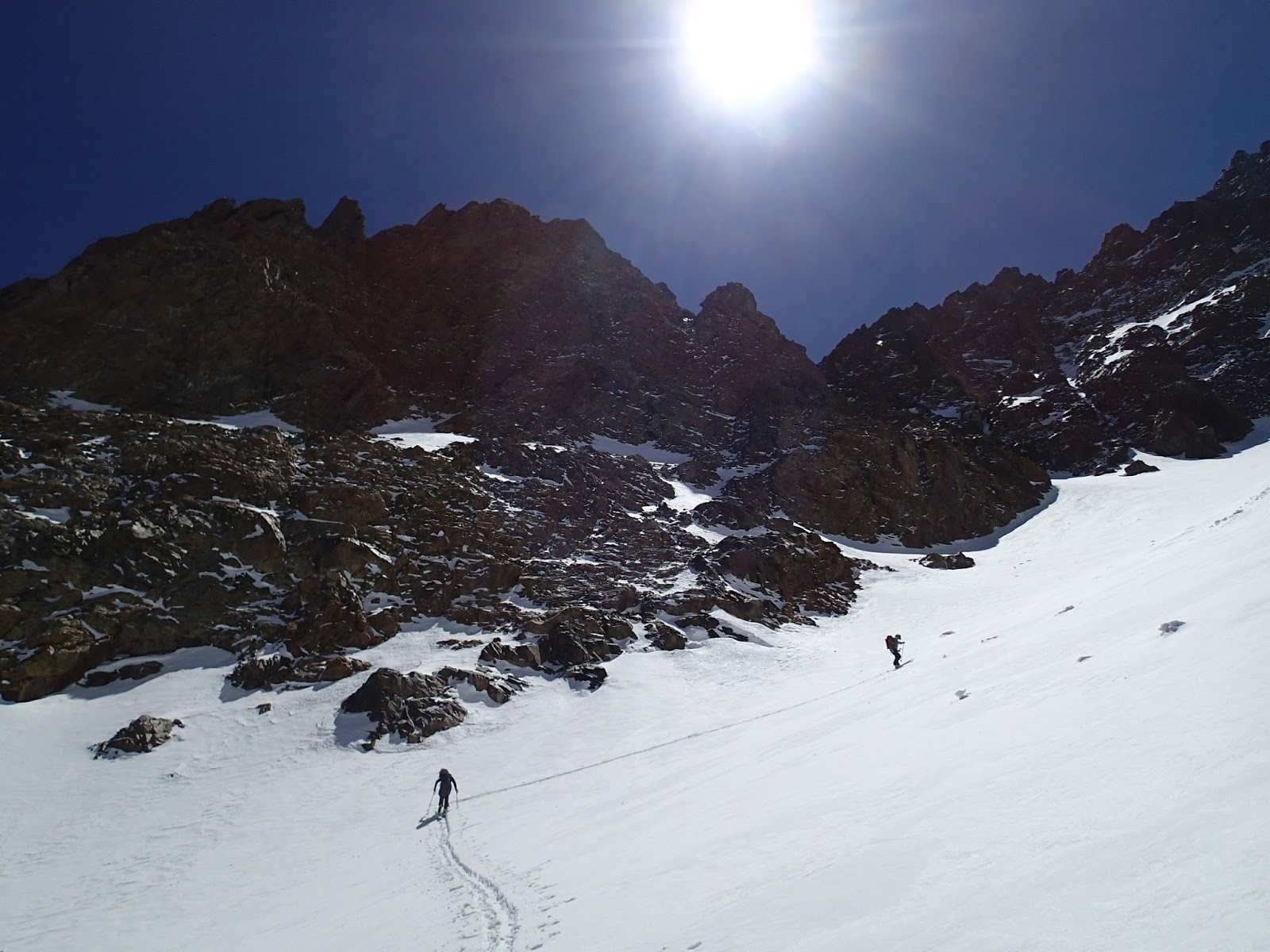 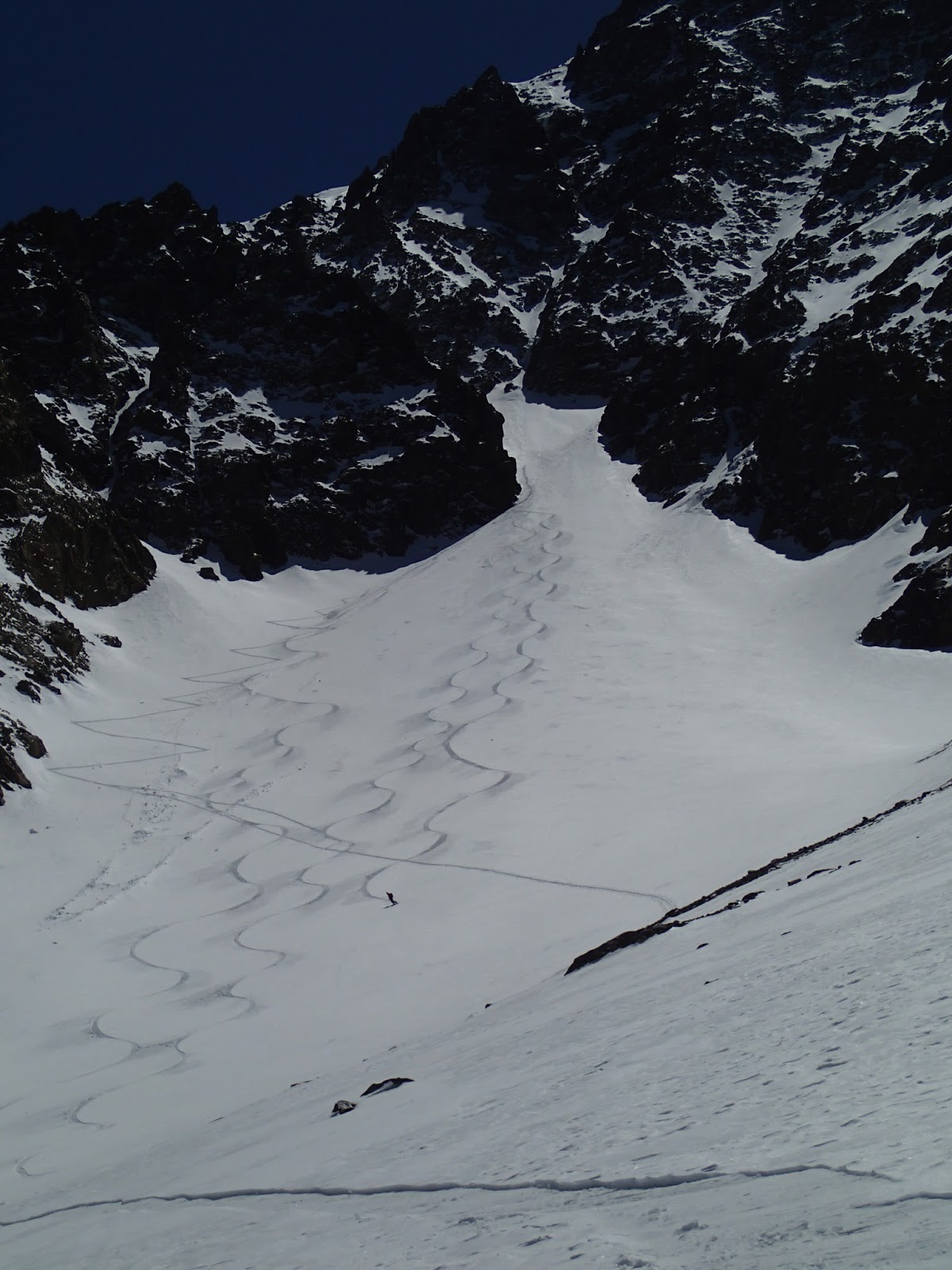 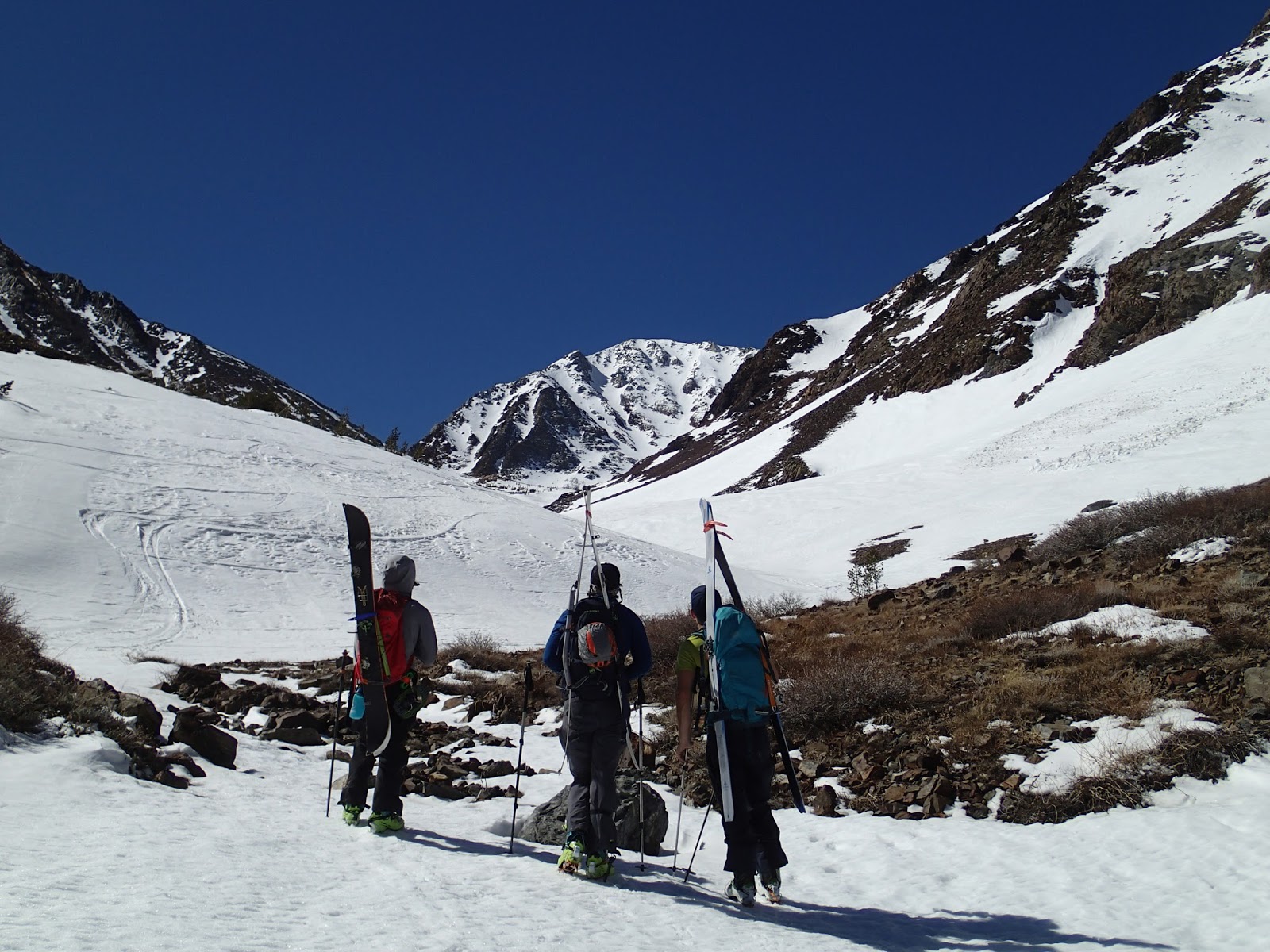 We added a 4th person to the crew on this day, a local. He had intentions of skiing something a little easier off of Mt Esha. It was a longer day, not by Sierra standards, but by mine it was a little long to call it a "mellow day".

We booted up the easiest shot up Esha, traversed onto a scree field to top out on our lines. We paired off and skied two separate lines. Top was trash, wind blown, barely-get-an-edge in but but turn 4 I could feel the snow changing. It was blower. Surprise surprise the Sierra has blower snow still hidden in couloirs in April! 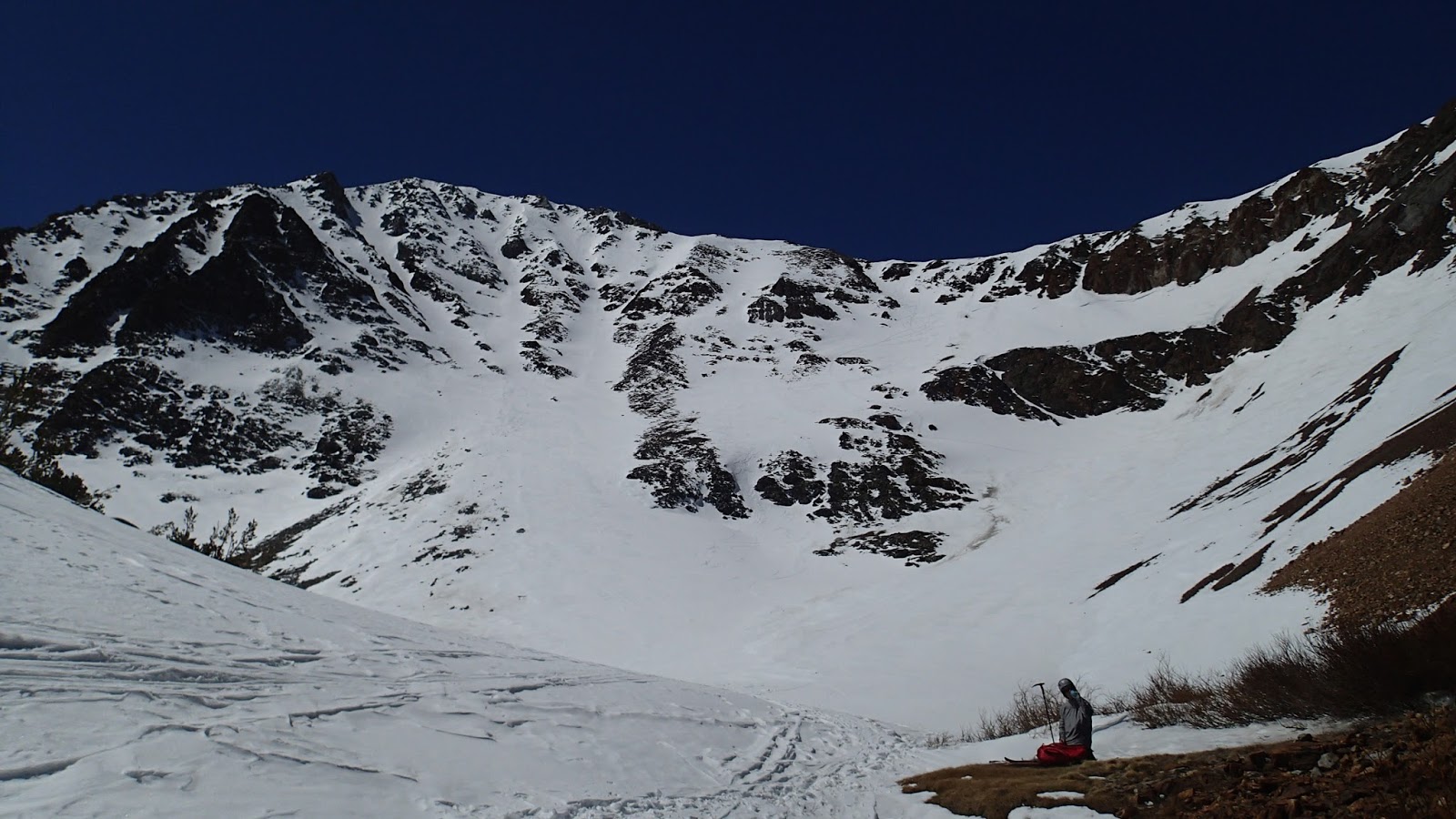 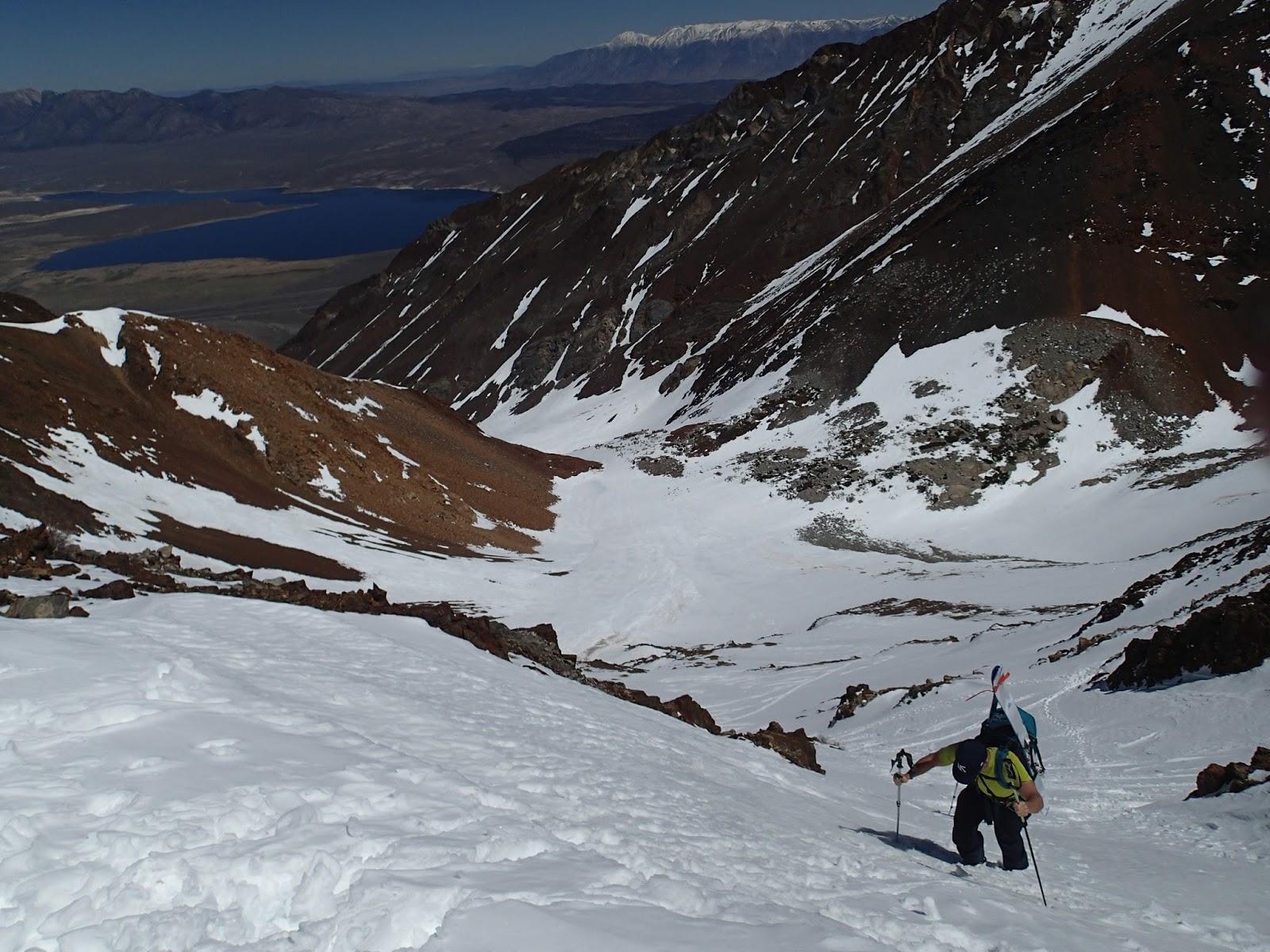 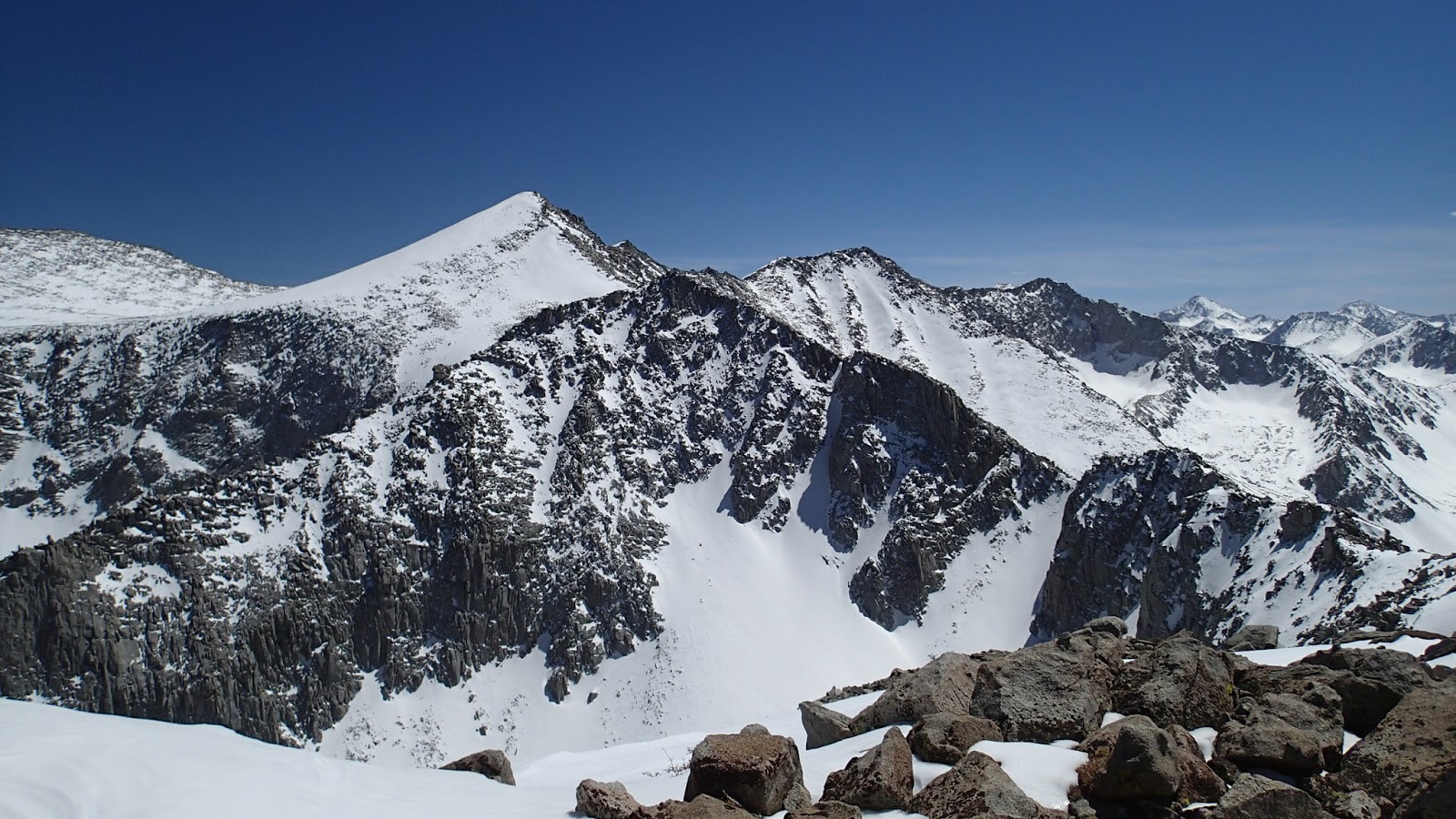 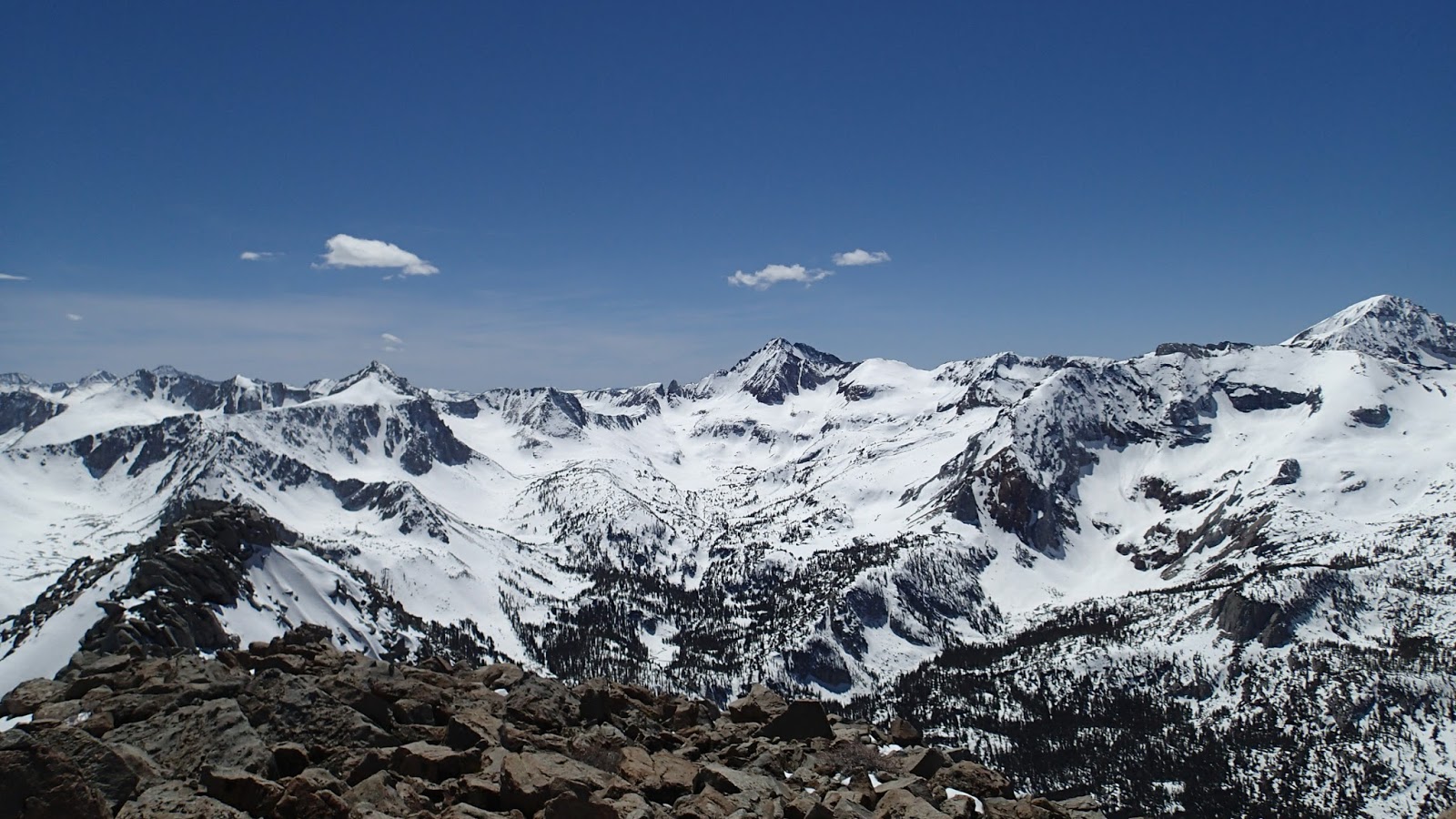 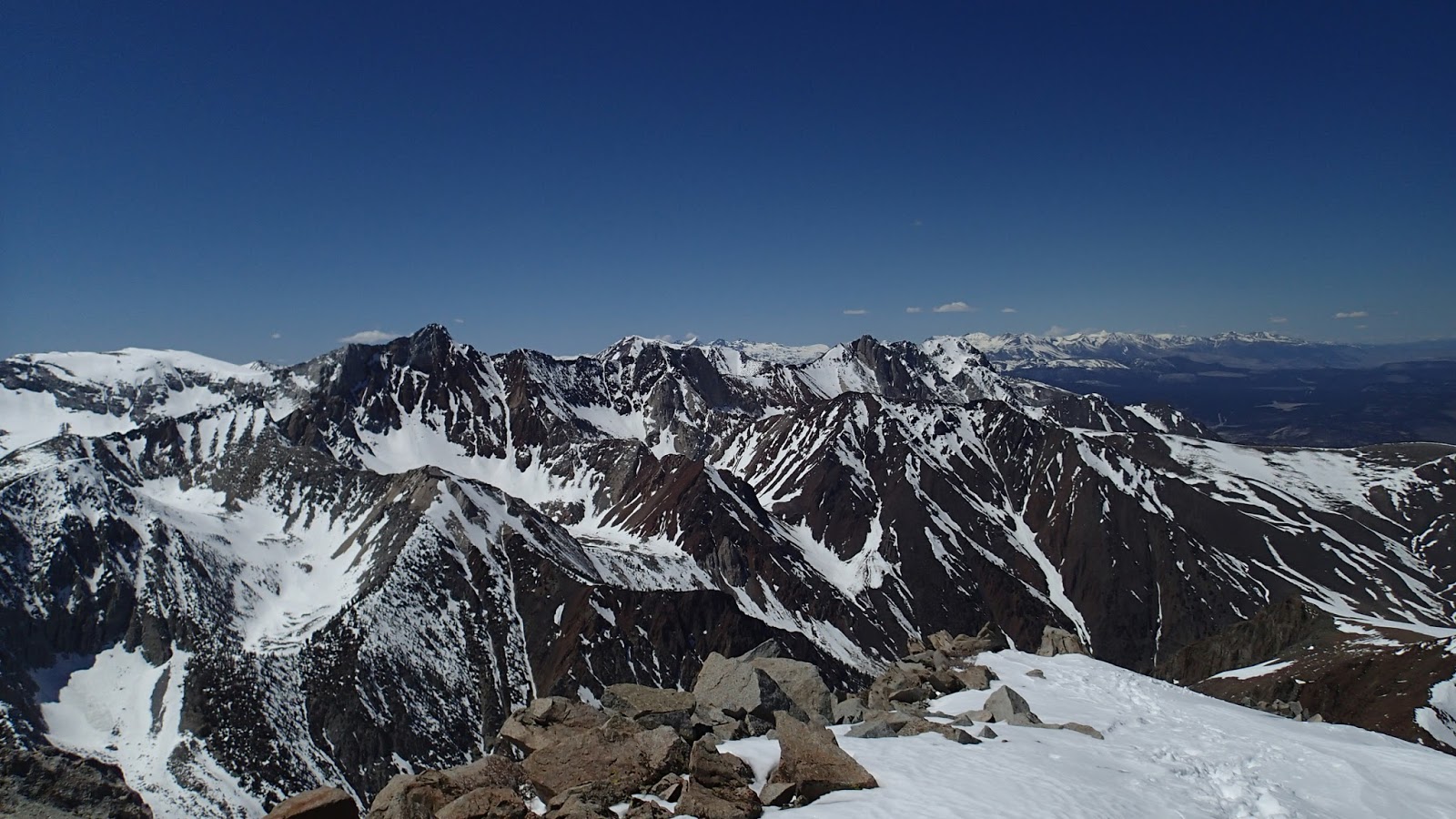 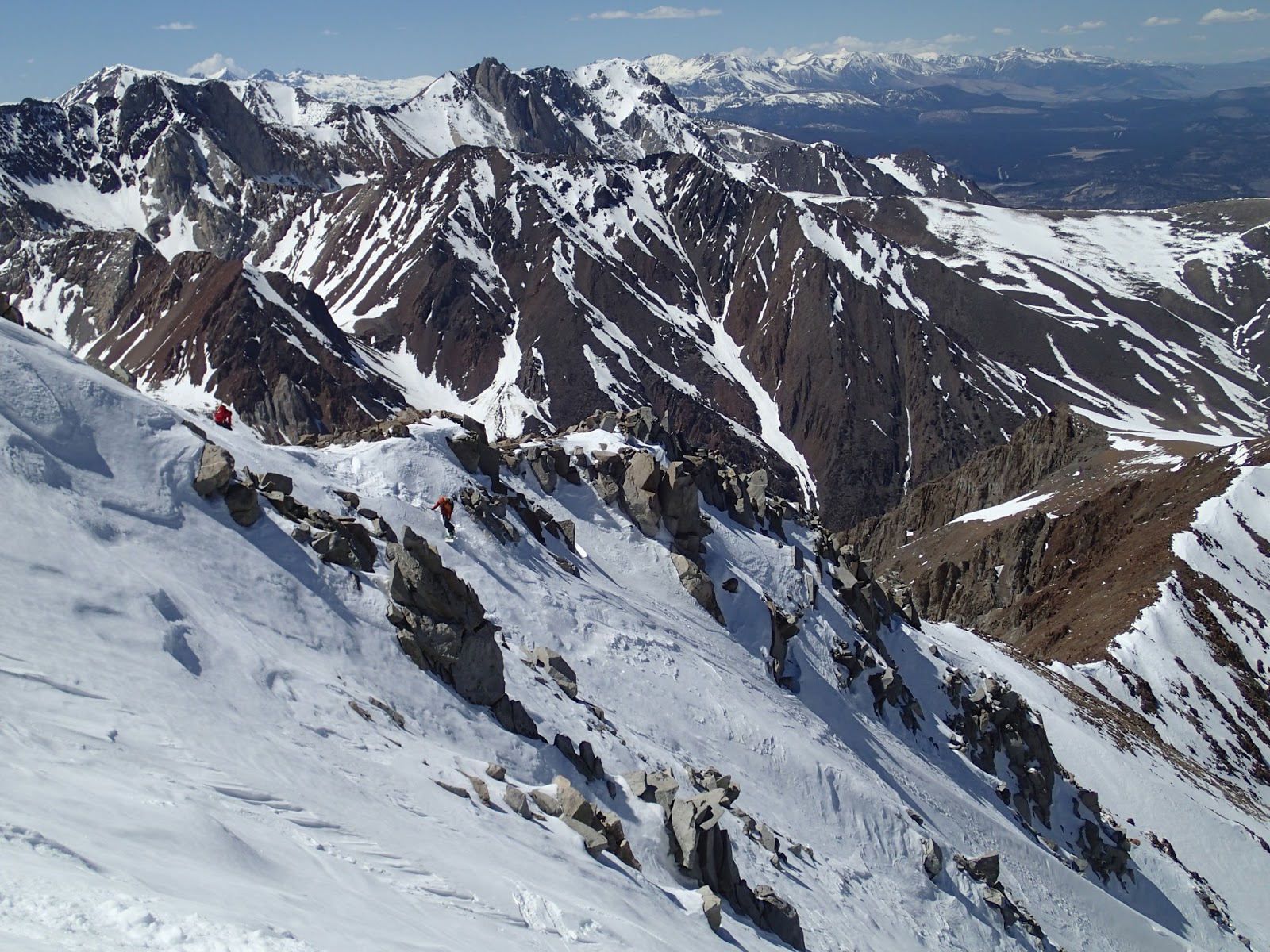 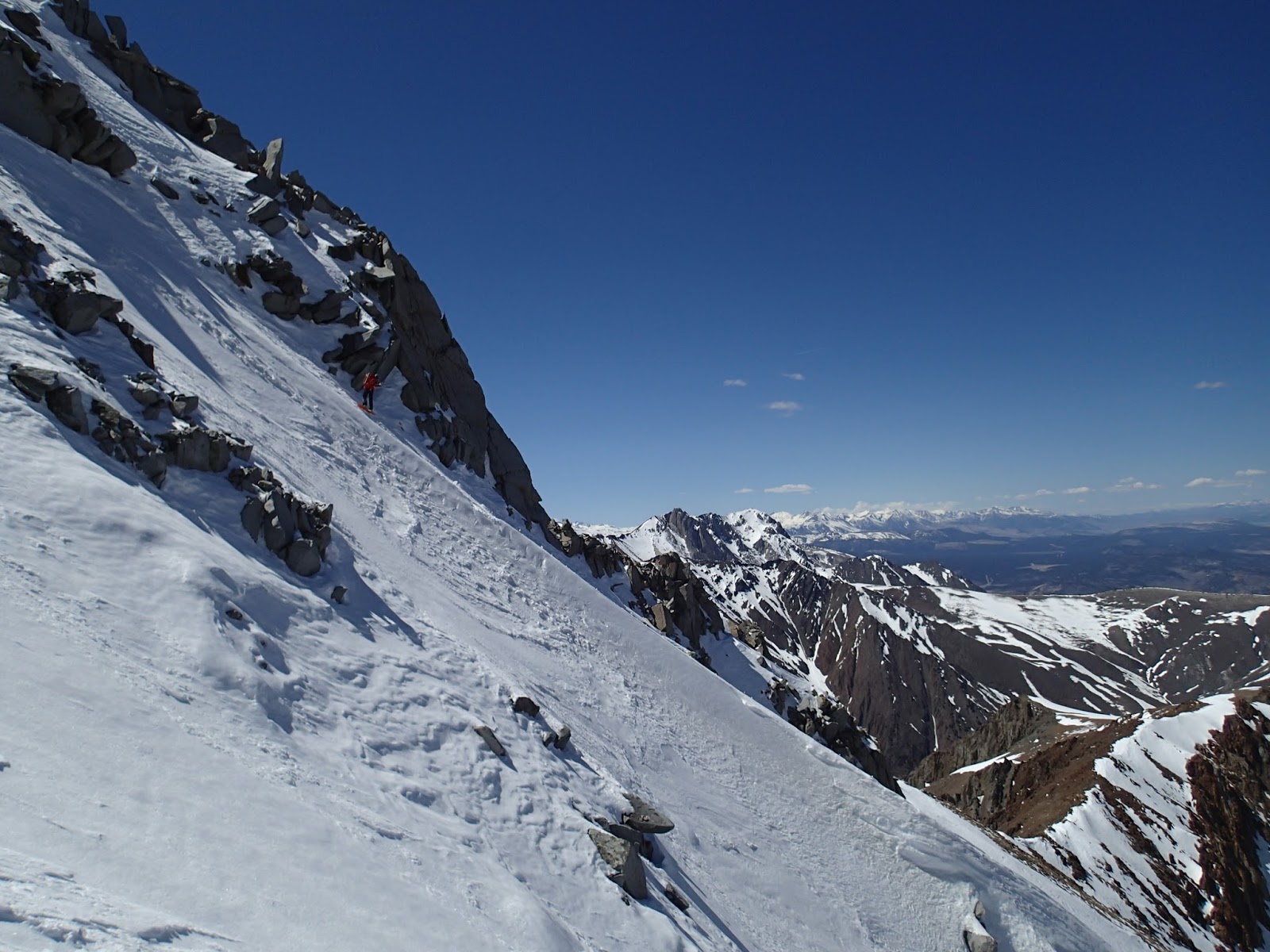 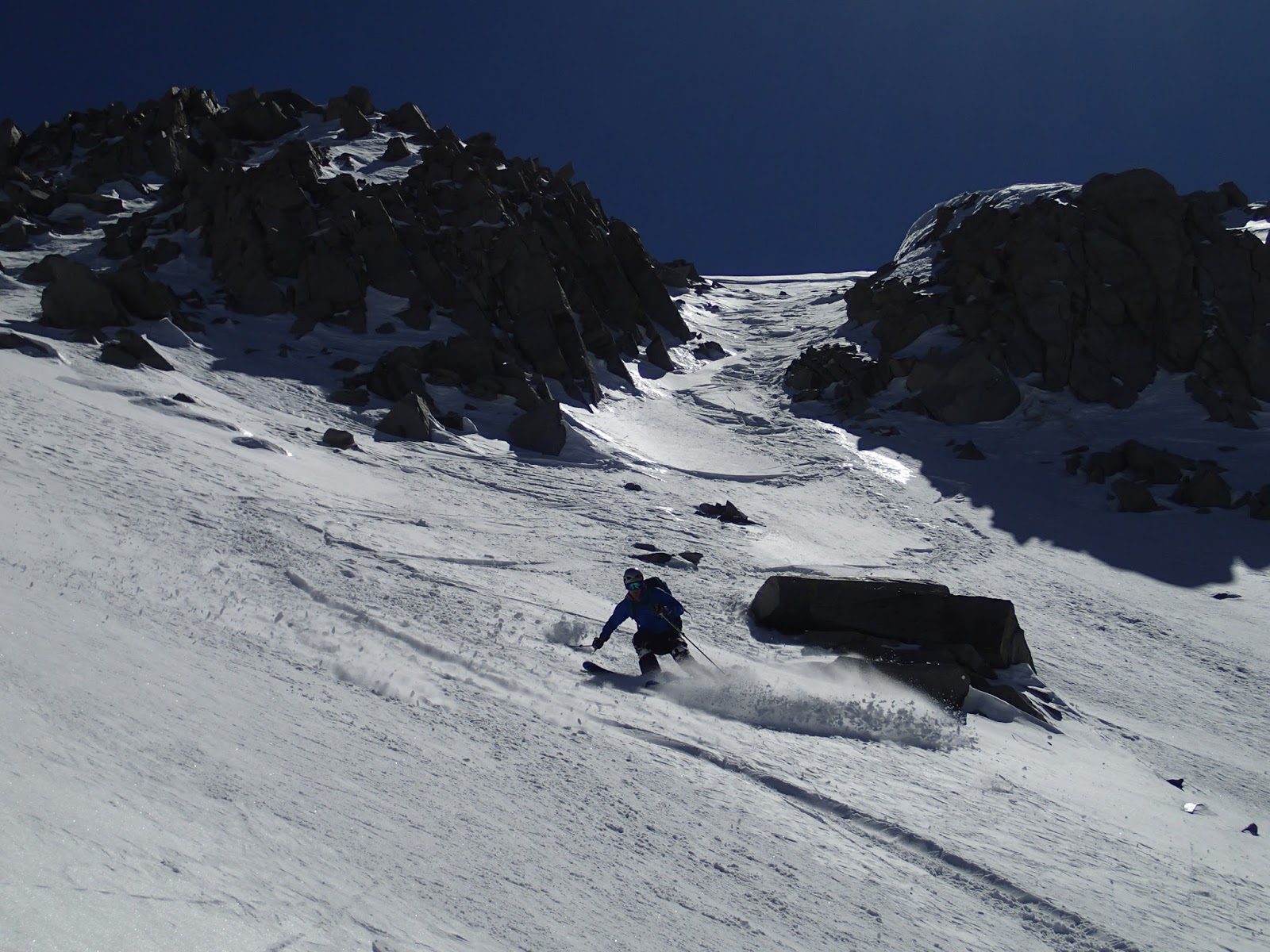 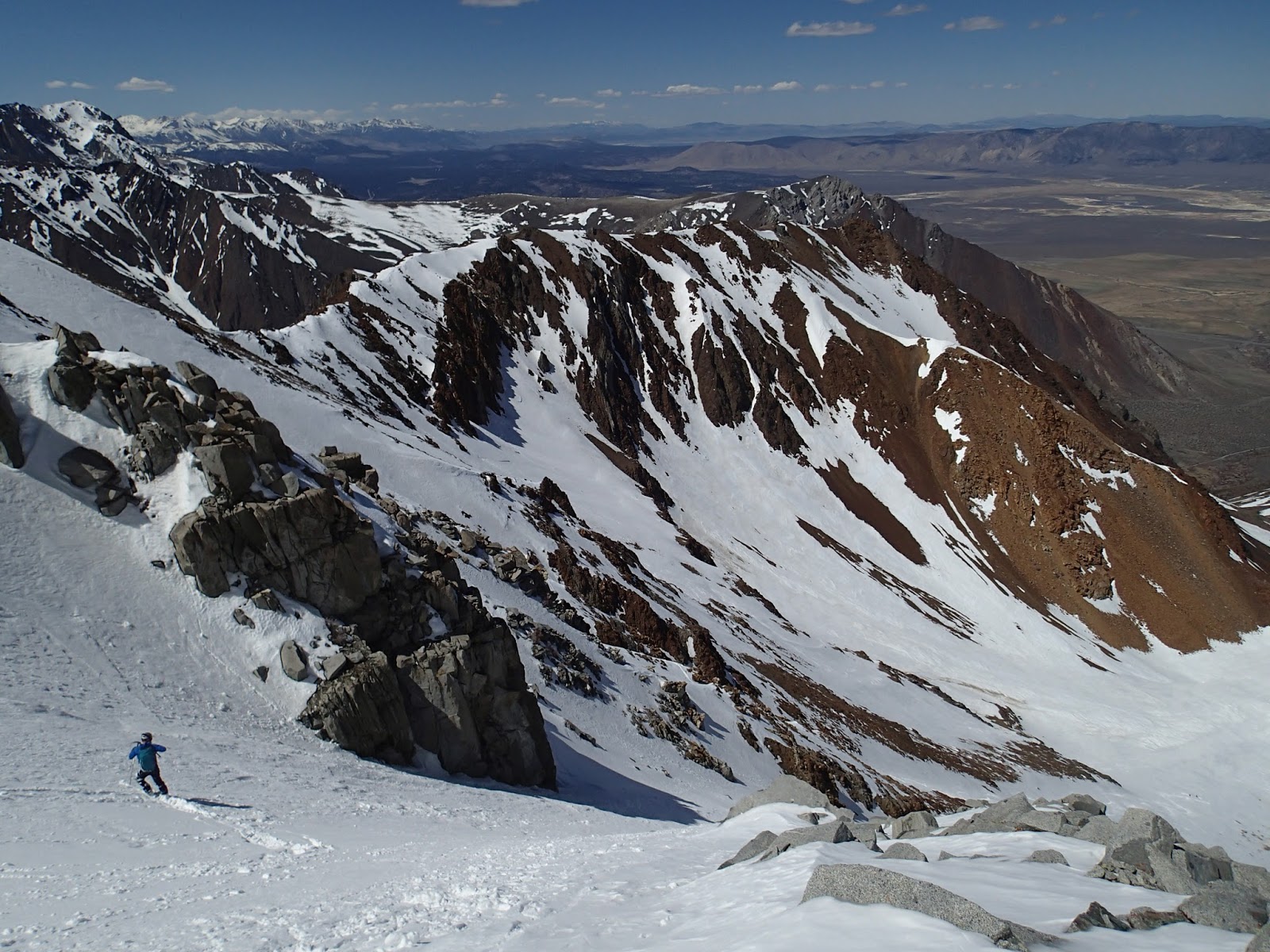 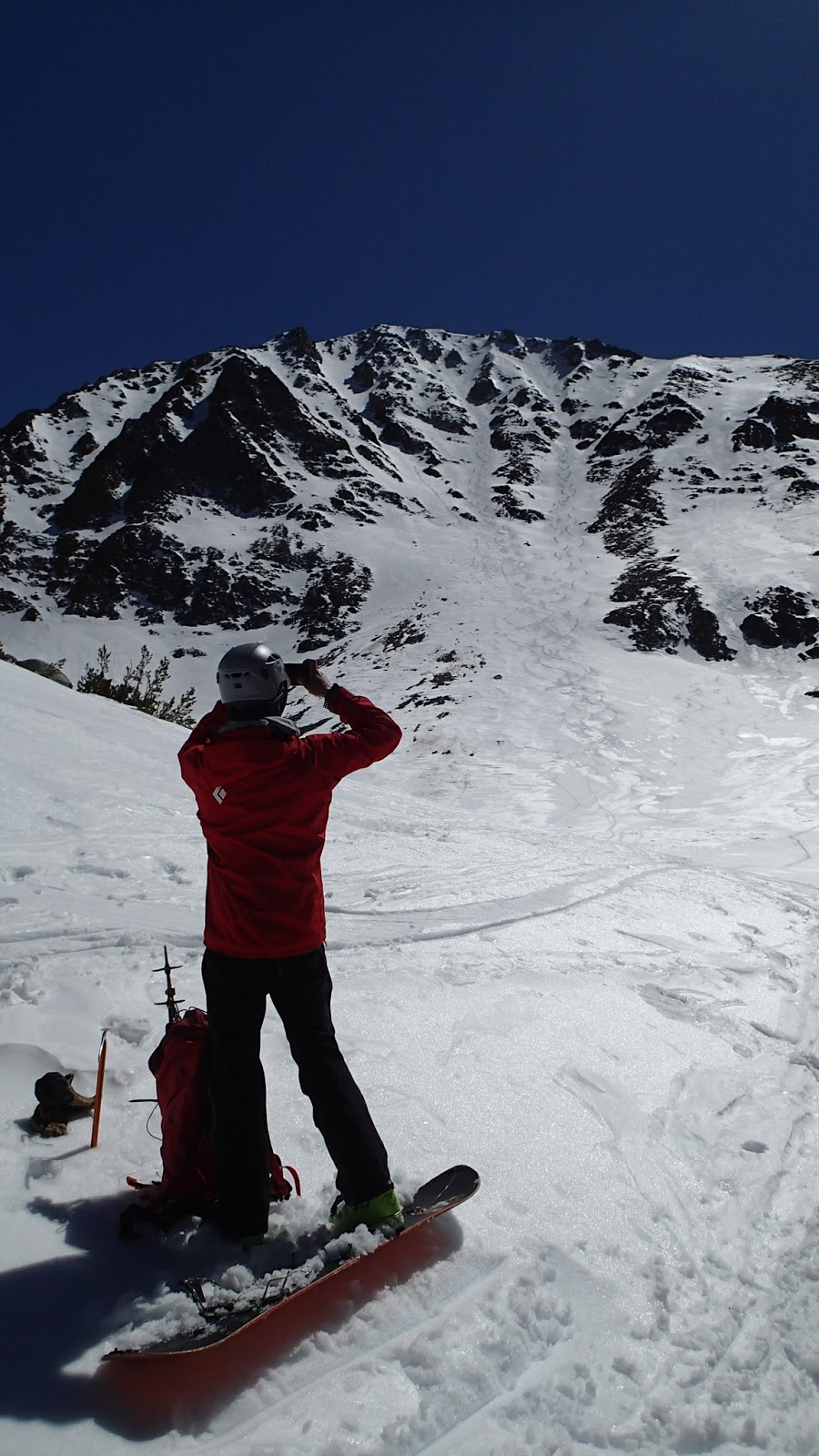 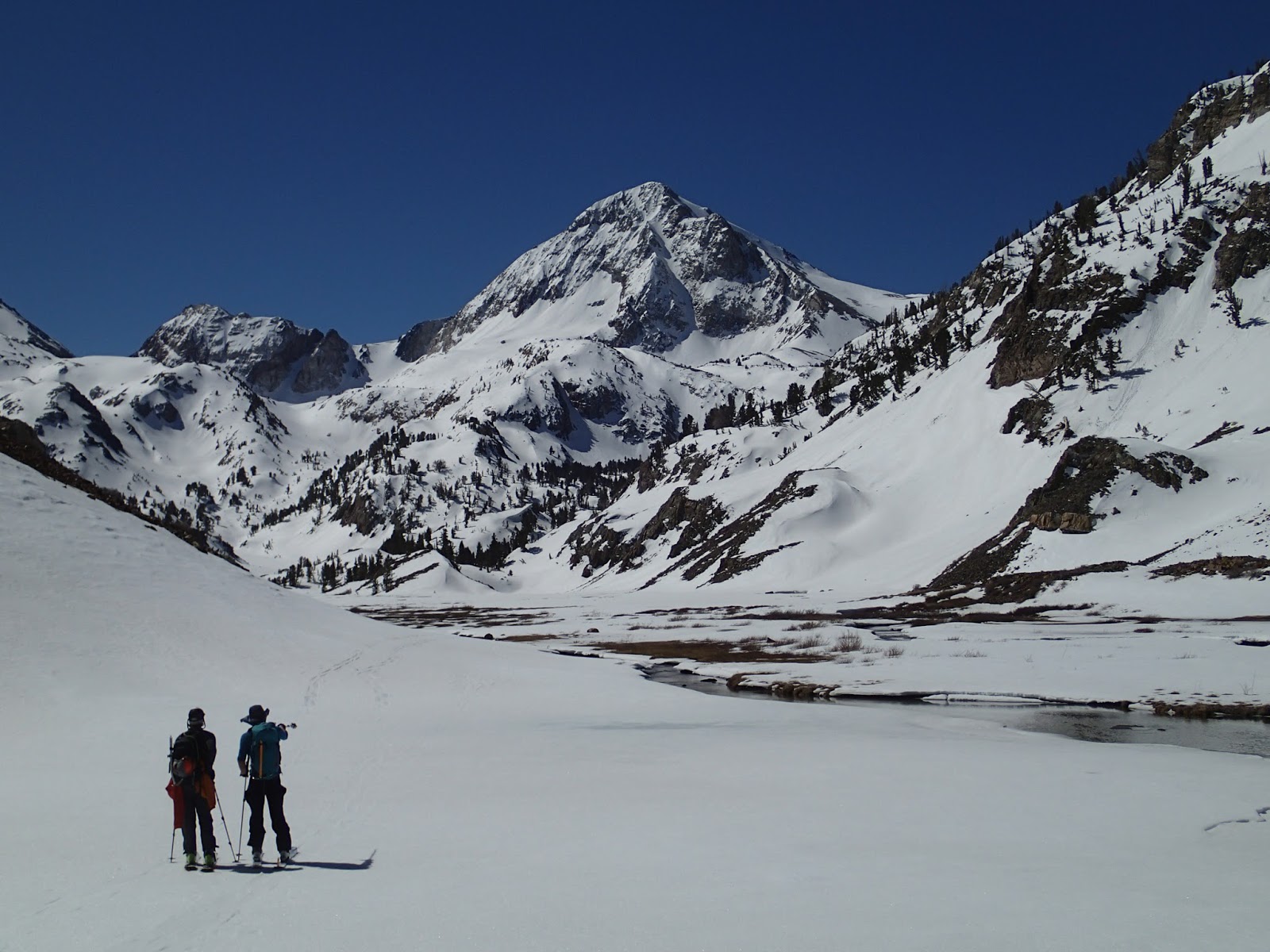 Pretty much the final day of our trip, we had intentions of skiing the North Couloir off of Red Slate Mountain. We got stopped short because of timing. I wish I made a bigger push to just do it, but at the same time I am glad we decided as a group to bail. It was disappointing though because it was a slog of a day on dirt, then skinning while the California sun blazed down hard on all of us, and to not accomplish the task can be frustrating but I guess it's just another reason to get back to the East side. 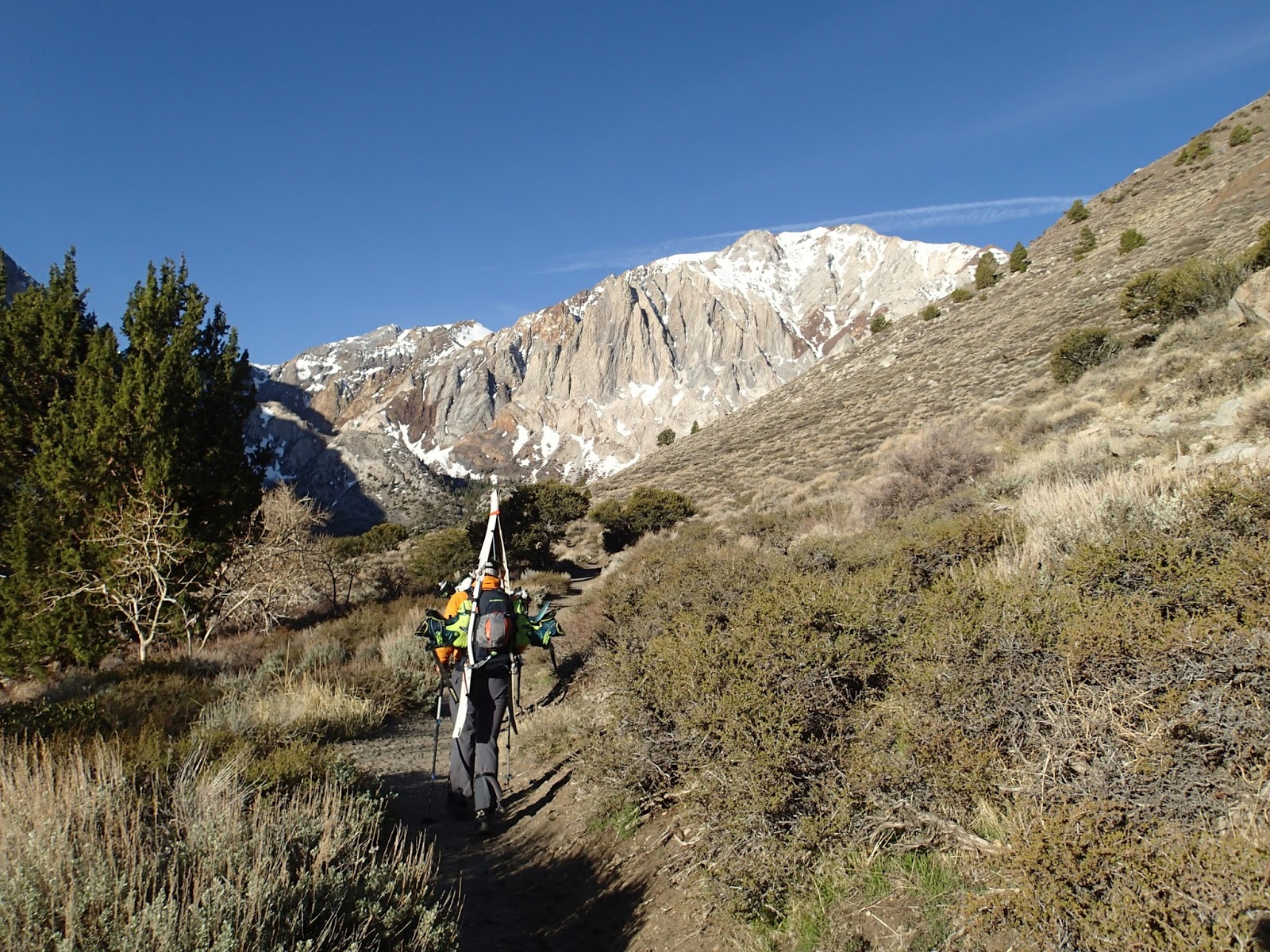 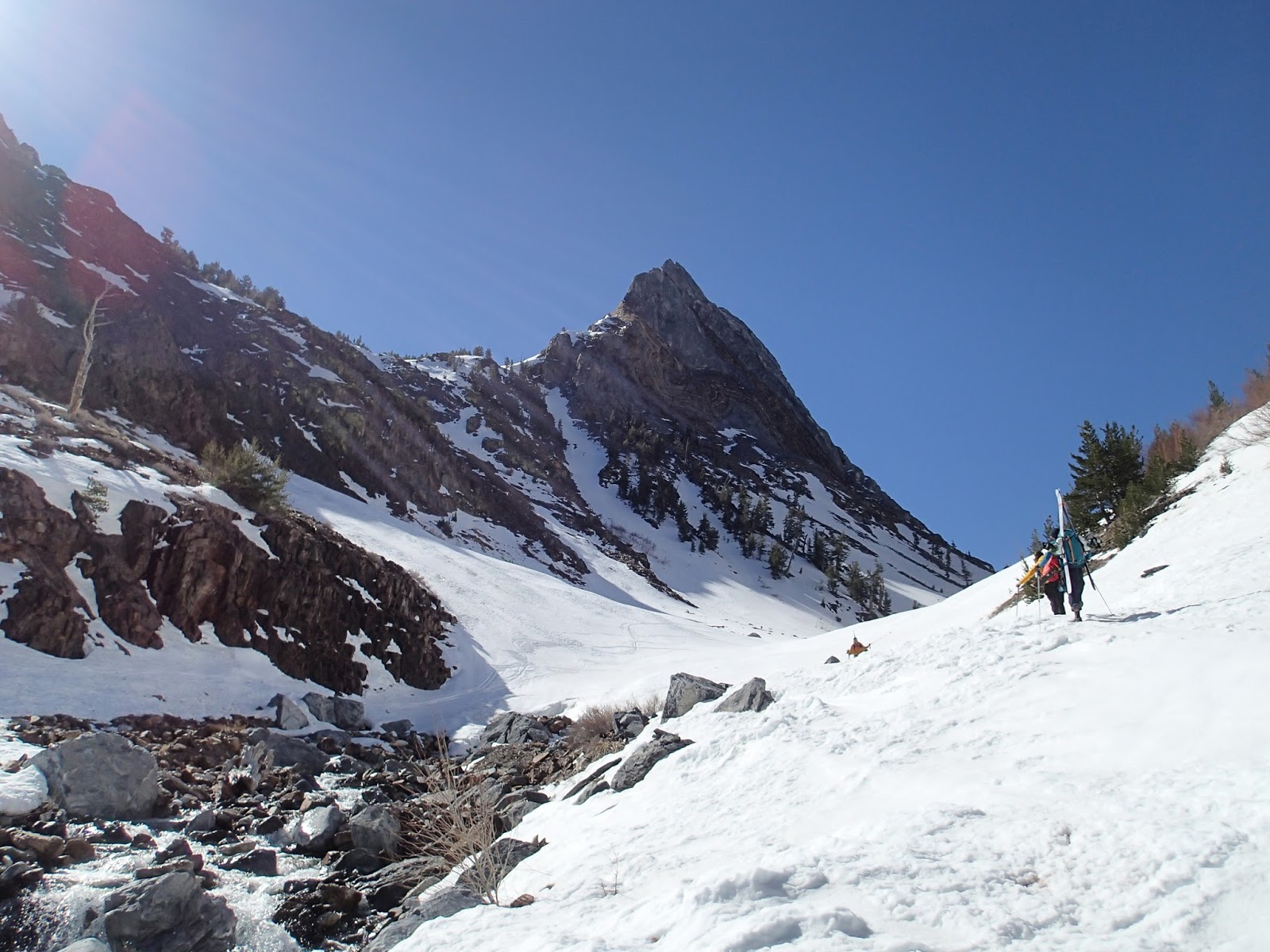 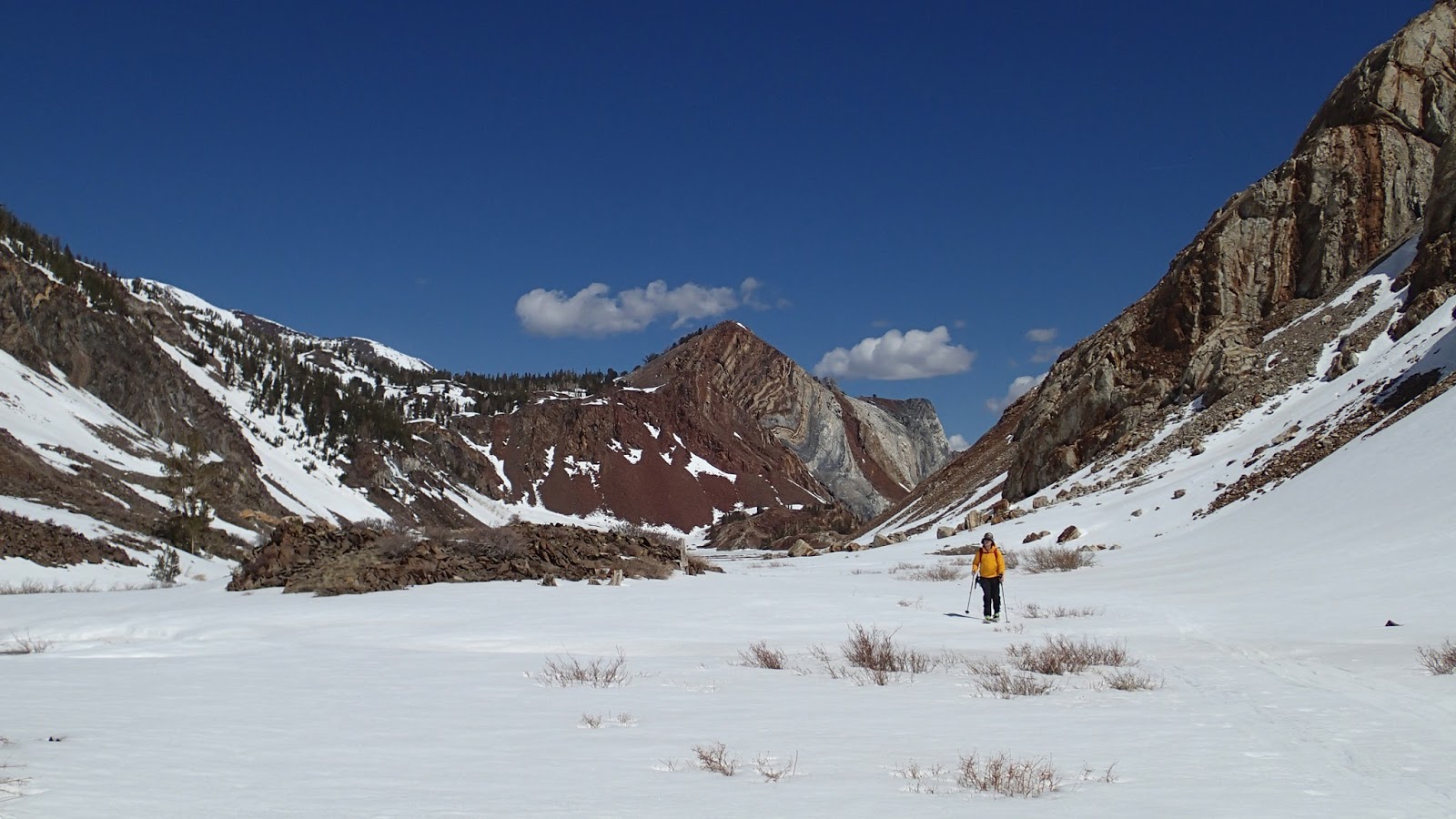 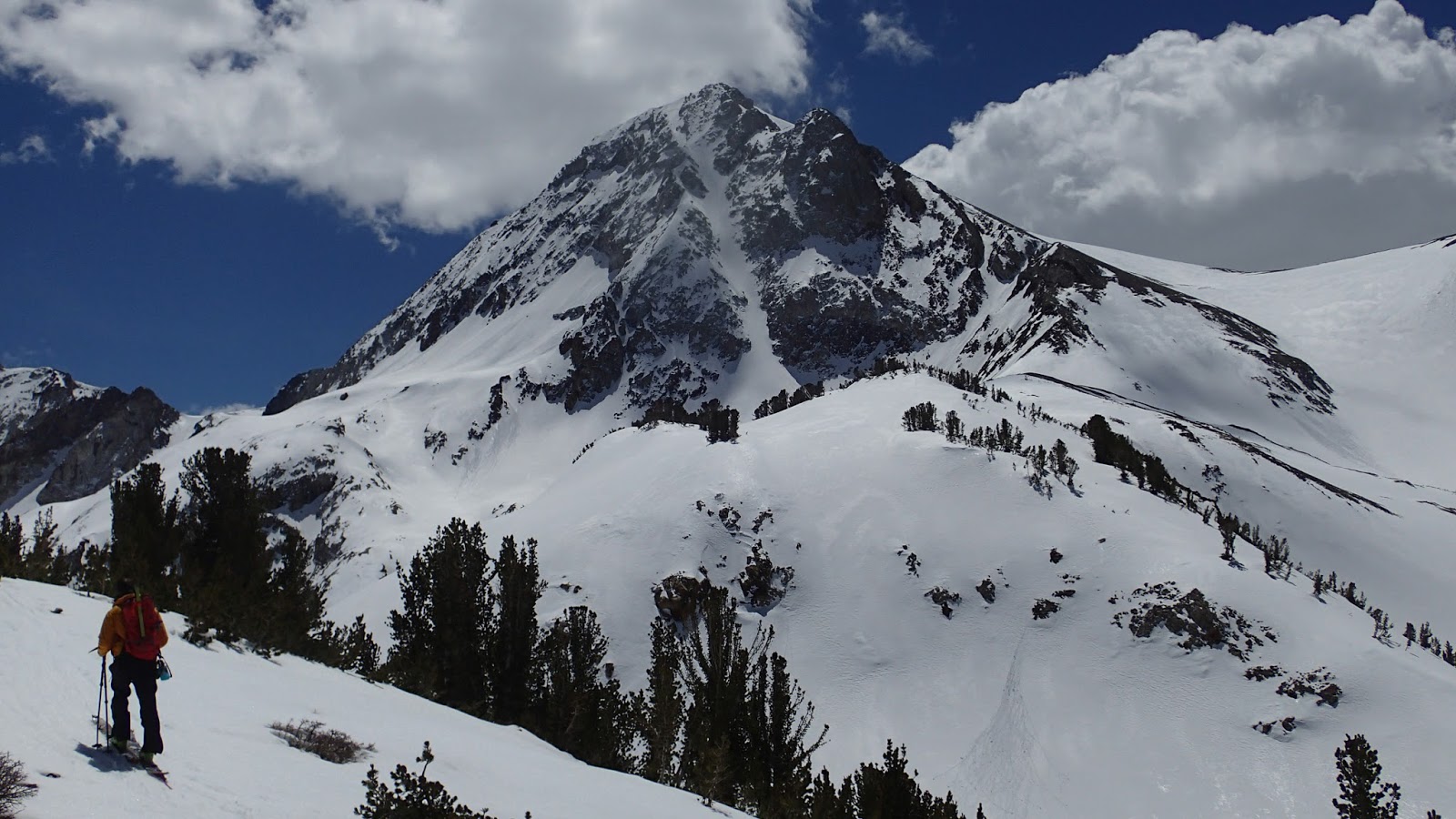 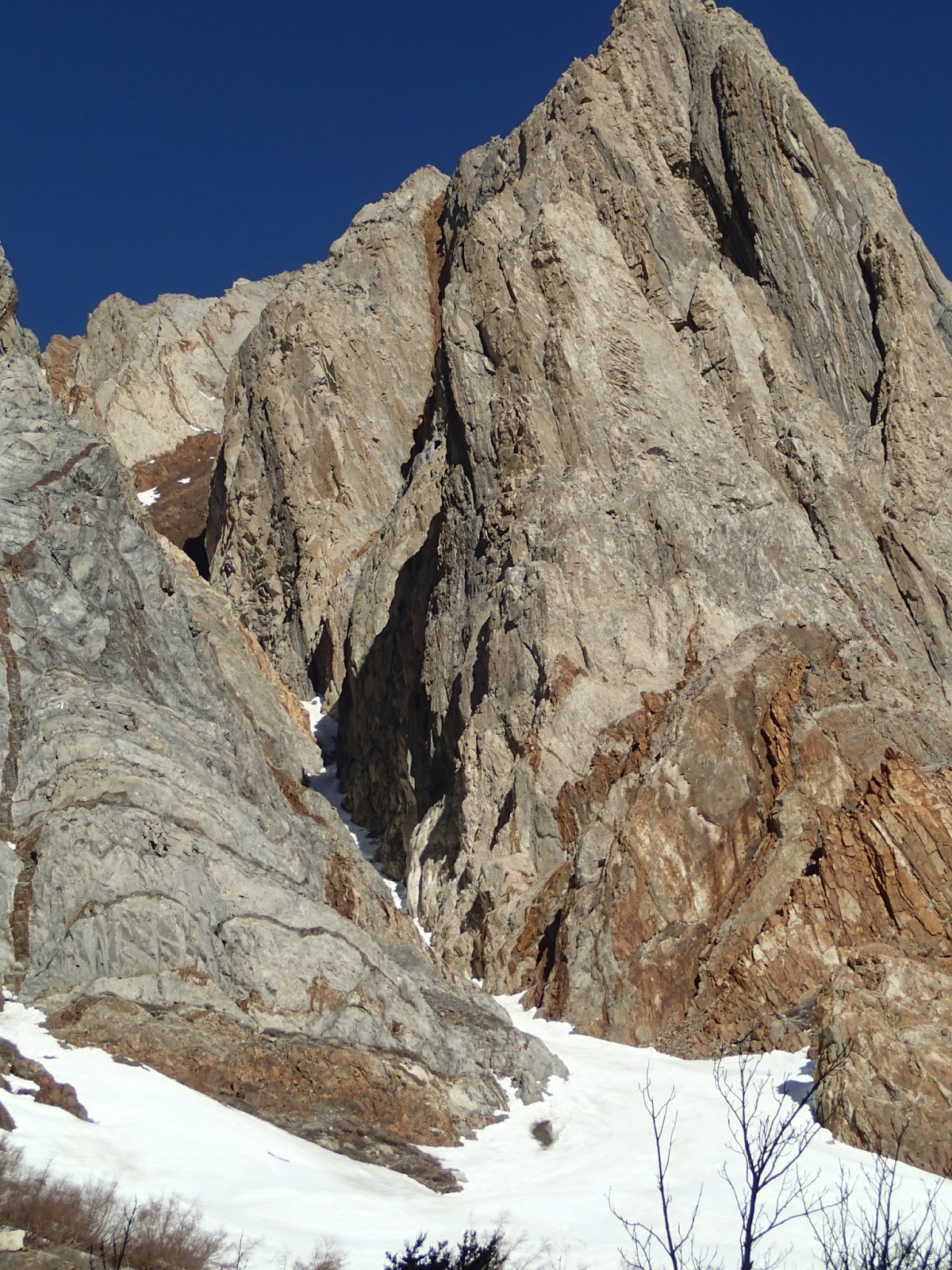 Pinner couloir, not totally in. 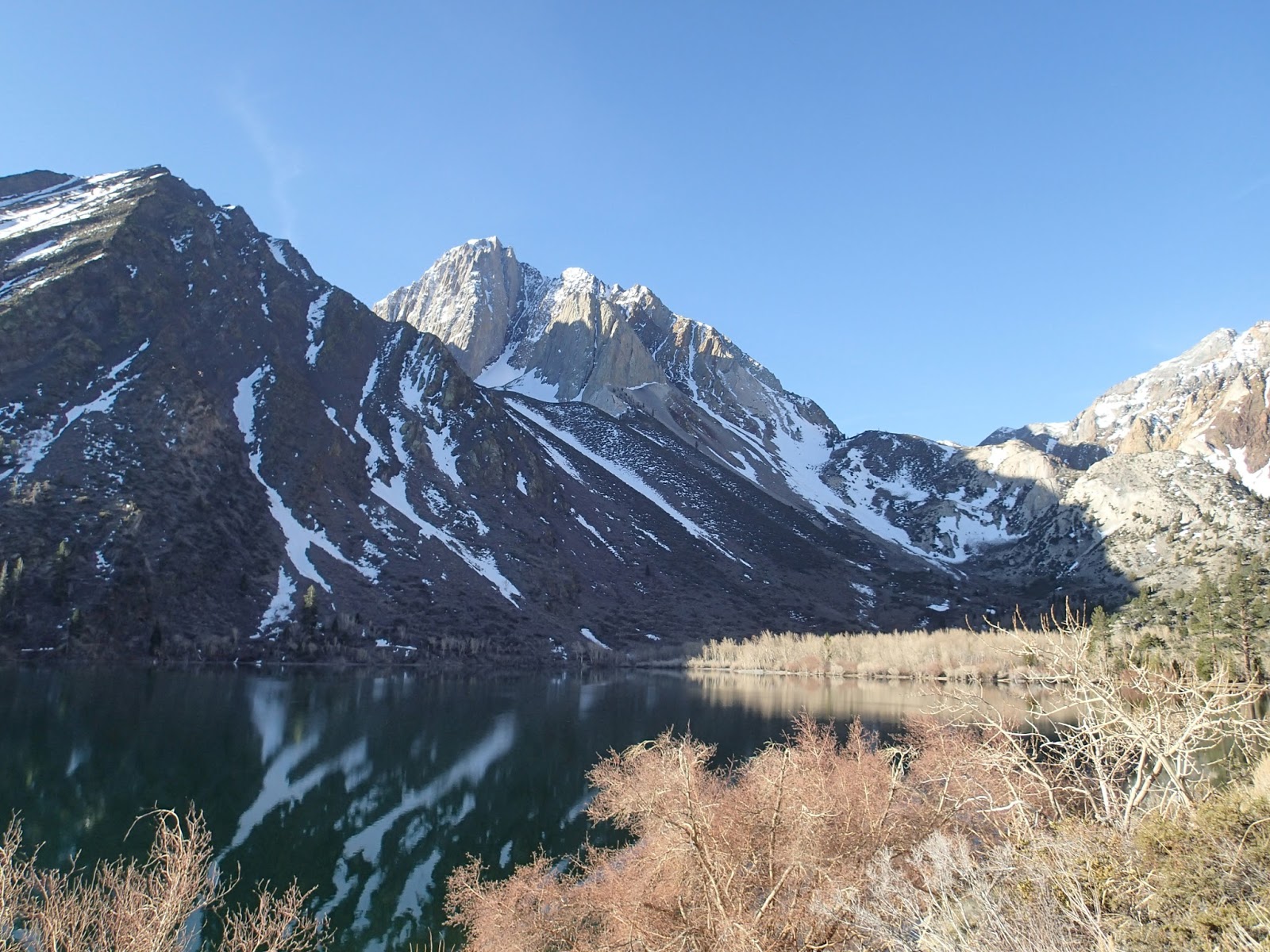 Conclusion:
Overall, I was/am blown away by the Sierra. The late Steve Romeo, if you read his posts on the area [not verbatim] state that if he wasn't so hooked on the Tetons that he could see himself in the Sierra. I see why he said it. It's like 7 Grand Teton Parks put together in a huge line. Despite, the blazing sun beating down on us everyday forcing us to reapply sunscreen every 2 hours, the couple of failed attempts on lines, the manky and wet skiing down low, I still can't wait to get back and I know I'm not the only one thinking the same thing. It is an incredible place worth exploring for years to come.