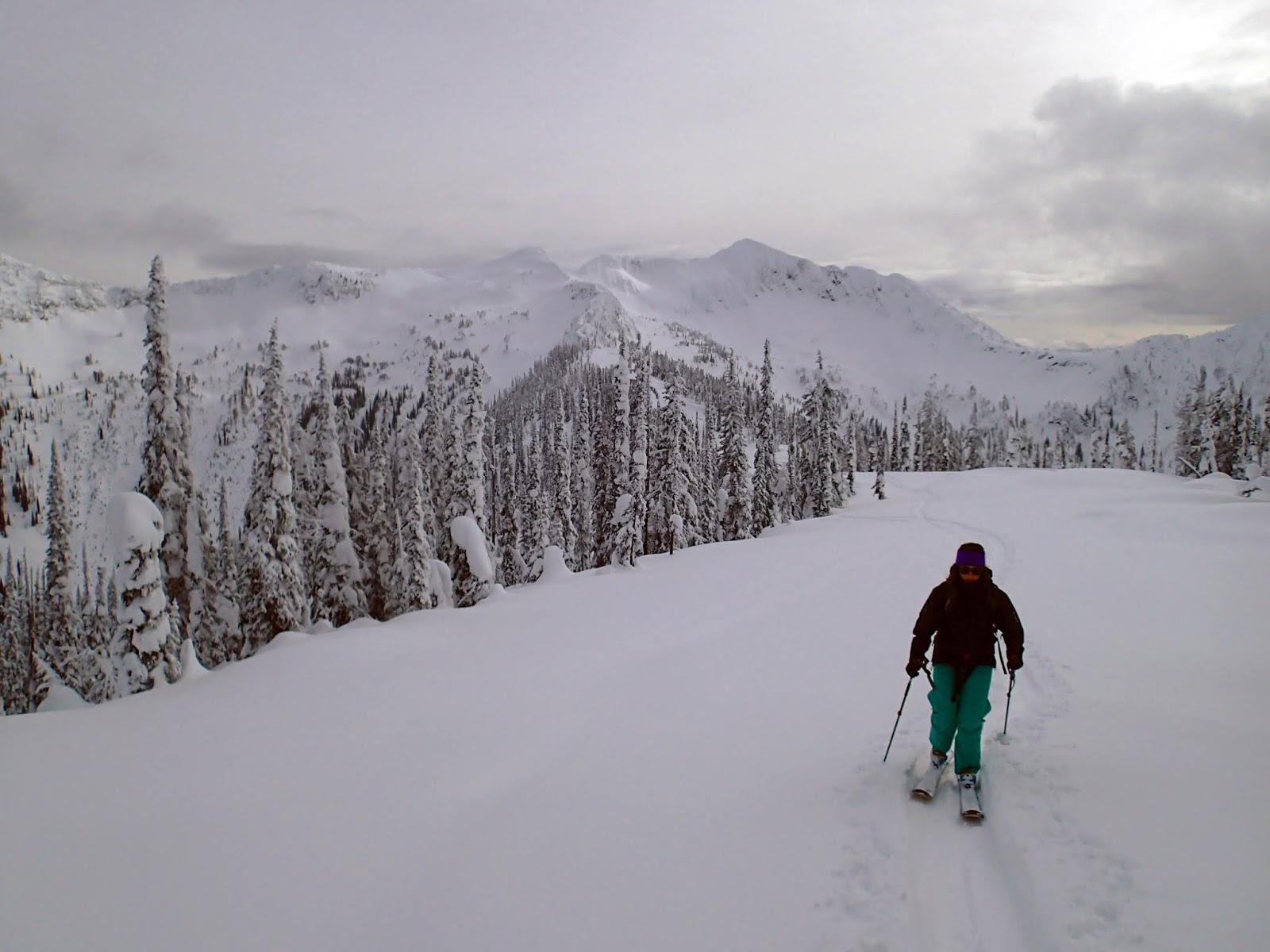 The Powder Highway, a 1,175km highway containing eight ski resorts in the southern part of British Columbia including Fernie, Kimberley Alpine, Fairmont Hot Springs, Panorama, Kicking Horse, Revelstoke, Whitewater and RED Mountain. I had heard about it briefly in passing with friends on the skin track but never considered it. Why would I when we get plenty of snow where we live and have plenty of (backcountry) terrain to last multiple lifetimes?

Well, we went. We went because we wanted to get out of our bubble and try to score that sweet Canadian pow. We, my lady and I, also went because we both could get time off at the same time, a rarity.

With only eight days, and realistically only six days because of the two full days to and from, we had to limit where we went. We settled, based on Bing results, friends and Snapgram, that we would hit up Kicking Horse in Golden, Revelstoke in Revy, Whitewater in Nelson and RED in Rossland. I also wanted to get a day of backcountry on Rogers Pass. Below is how it shook out:

Day 1: Arrive in Golden
Driving from our home in the lower 48 we traveled through every season/weather pattern possible - first fog, then snow, then 55 degrees, then 45 degrees and 65 mph winds, rain, sunshine, bitter cold. We landed eventually in Whitefish, Montana for some food and later heard of the local brewery closing up shop. A downer, as we are/were fond of their Huckleberry Lager. The actual act of crossing the border was put as "uneventful" and "where's the red carpet". Yeah, no one cares we are crossing into Canada here. The border patrol asked us a few questions and that was it. Getting closer and closer to Golden for our first stop, it started to blizzard. The road became slick and on top of us changing from MPH to KPH, we dropped the speed a tick and slogged on. I could not see anything below half my windshield as the snow came in as fat flakes and straight at us, making my eyes hard t focus. I could feel two things happening; my heart racing from stress and my adrenaline kicking up for the hype on the hill happening overnight at Kicking Horse. All in it took us roughly 15 hours to get up there, a drive that normally takes 12 hours. 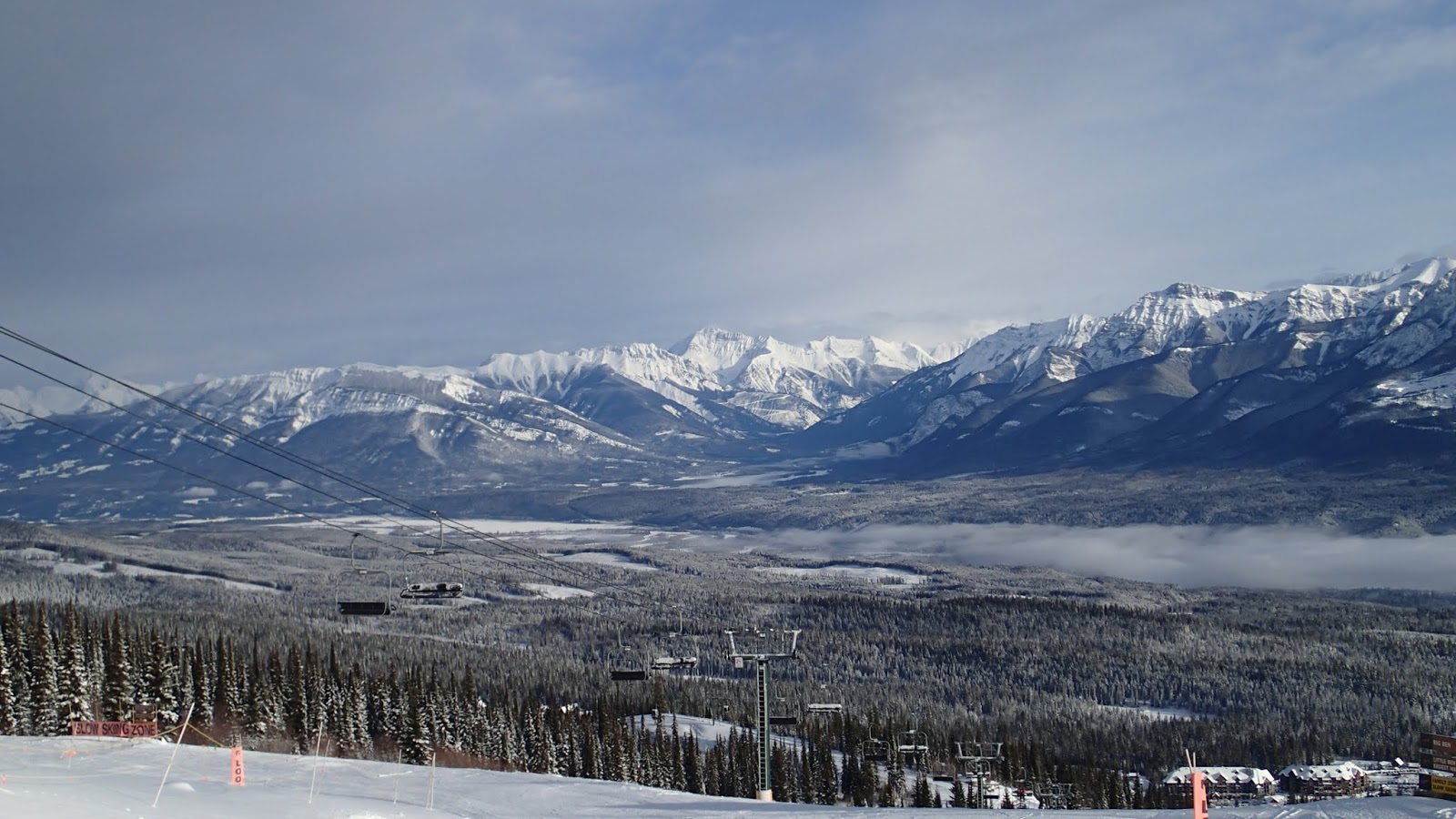 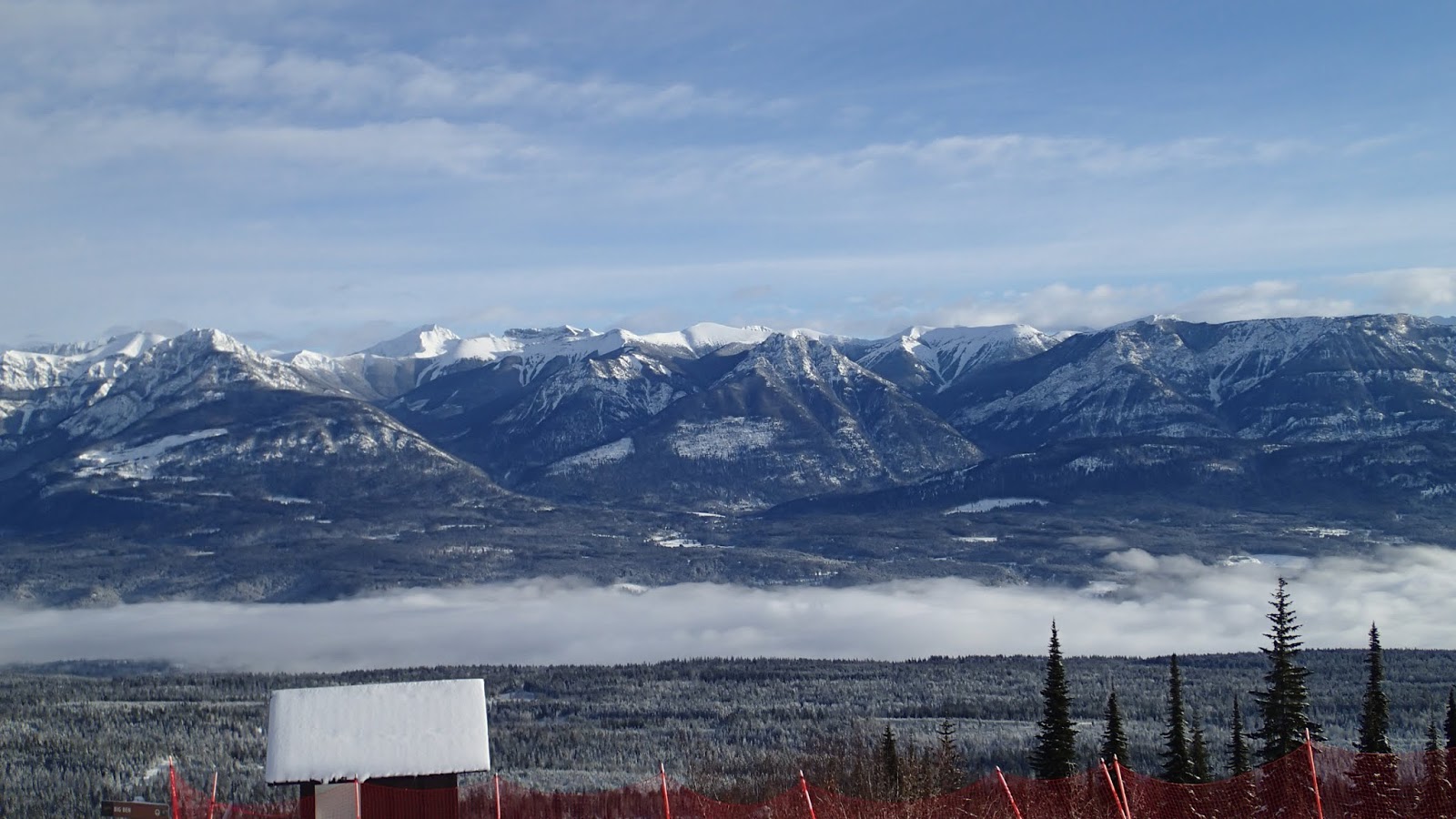 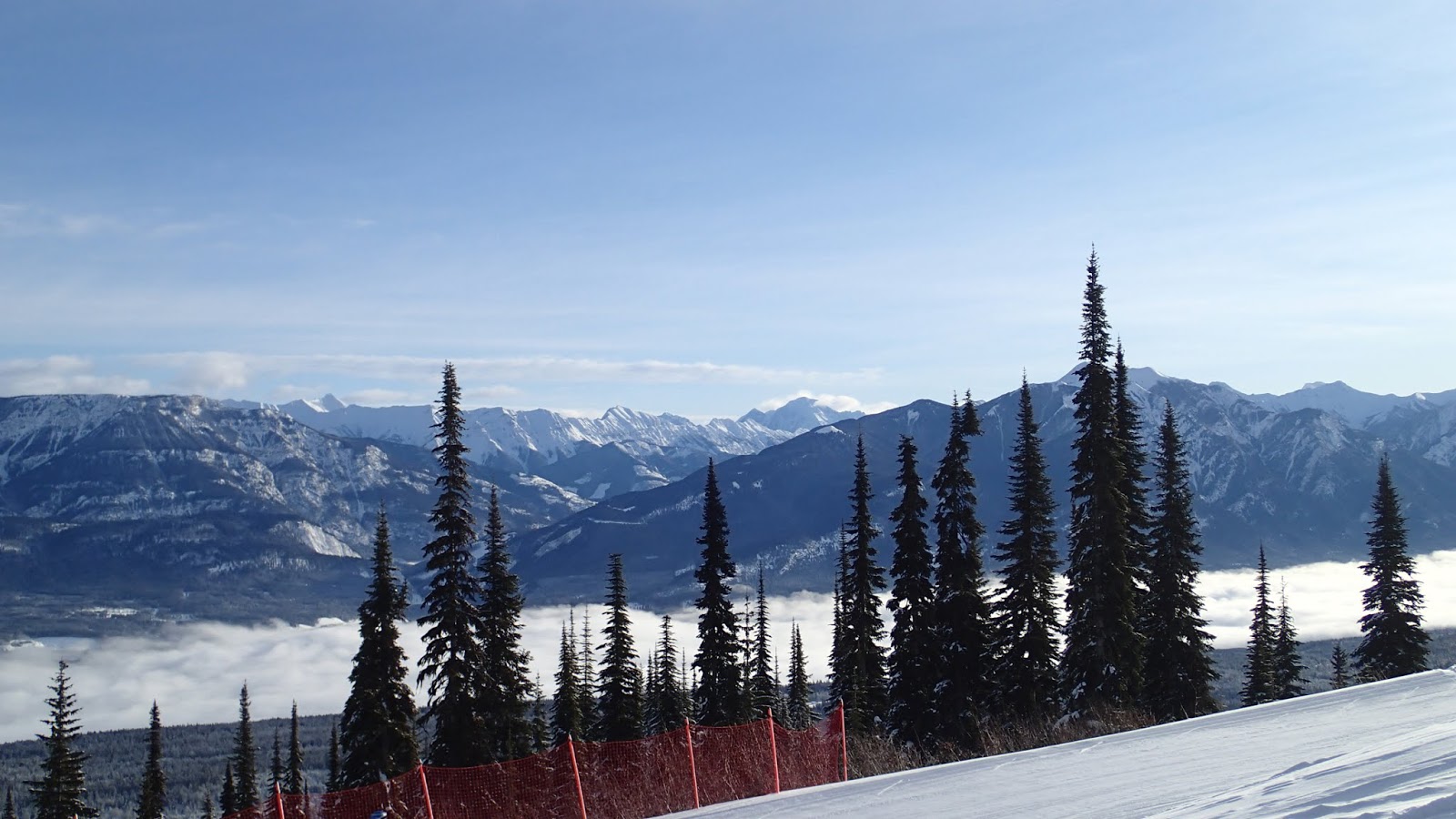 We wake up in Golden, BC in a little rental above a garage. We can finally see what we missed driving in at night. The scenery driving to the resort was the same, I hate the overuse of this word nowadays, and it was every bit of awesome. We could not stop looking around the valley as we were completely, 360 degrees surrounded by some of the most intimidating, majestic and, yes, awesome mountains. I could see how someone could get hooked on this place almost immediately.

To put it simply, Kicking Horse was awesome except for one little (major problem) - there is one gondola for the whole resort! We arrived to two lines on both sides feeding this one, eight-person gondola. There were probably 150 people in line (I don't know, it felt like Vail). There are also two lower chairs at the base and because of impatience did a couple laps on them. Eventually we said screw it and stood in line. Surprisingly, it didn't take that long and we should have done it earlier! 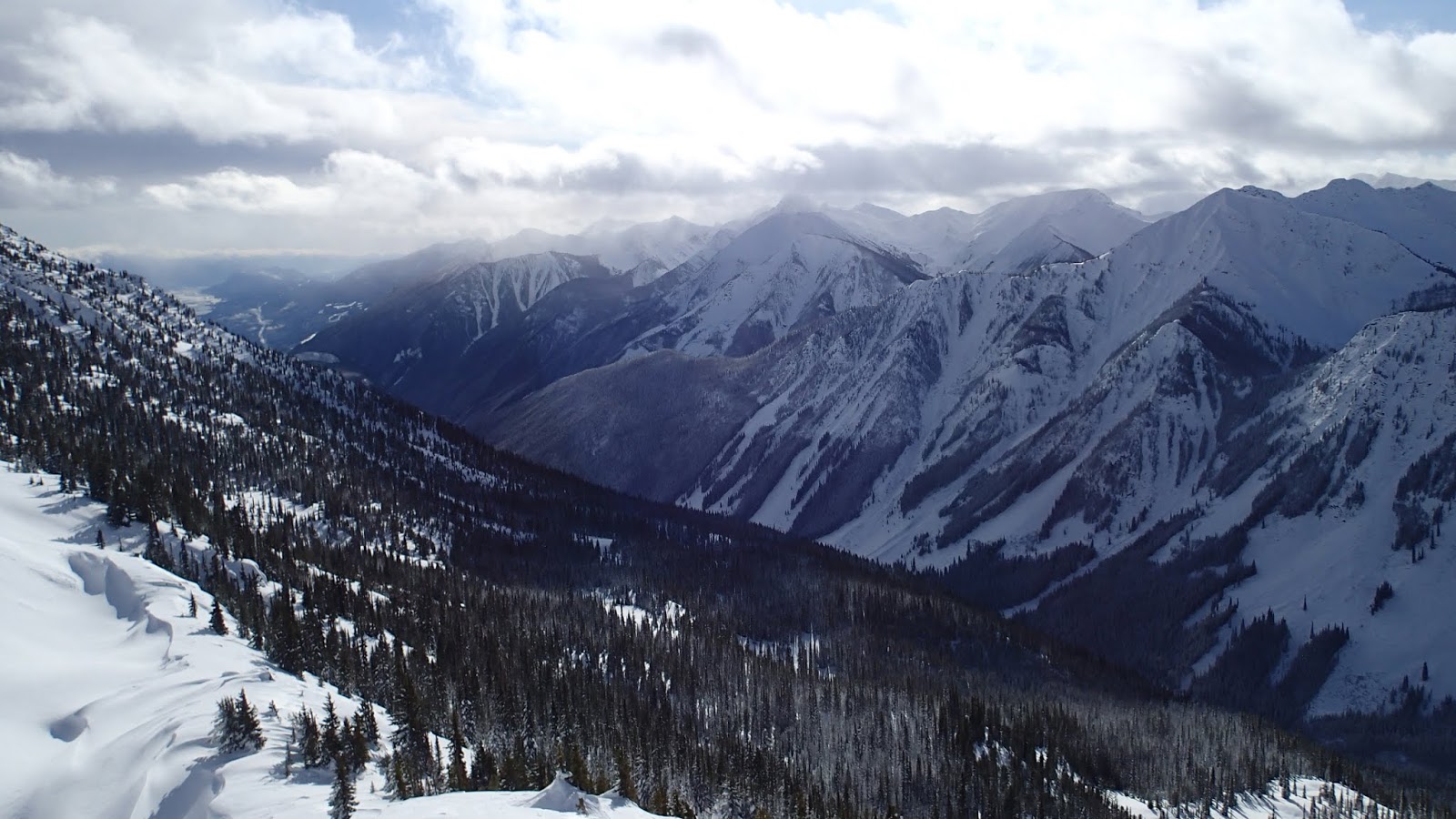 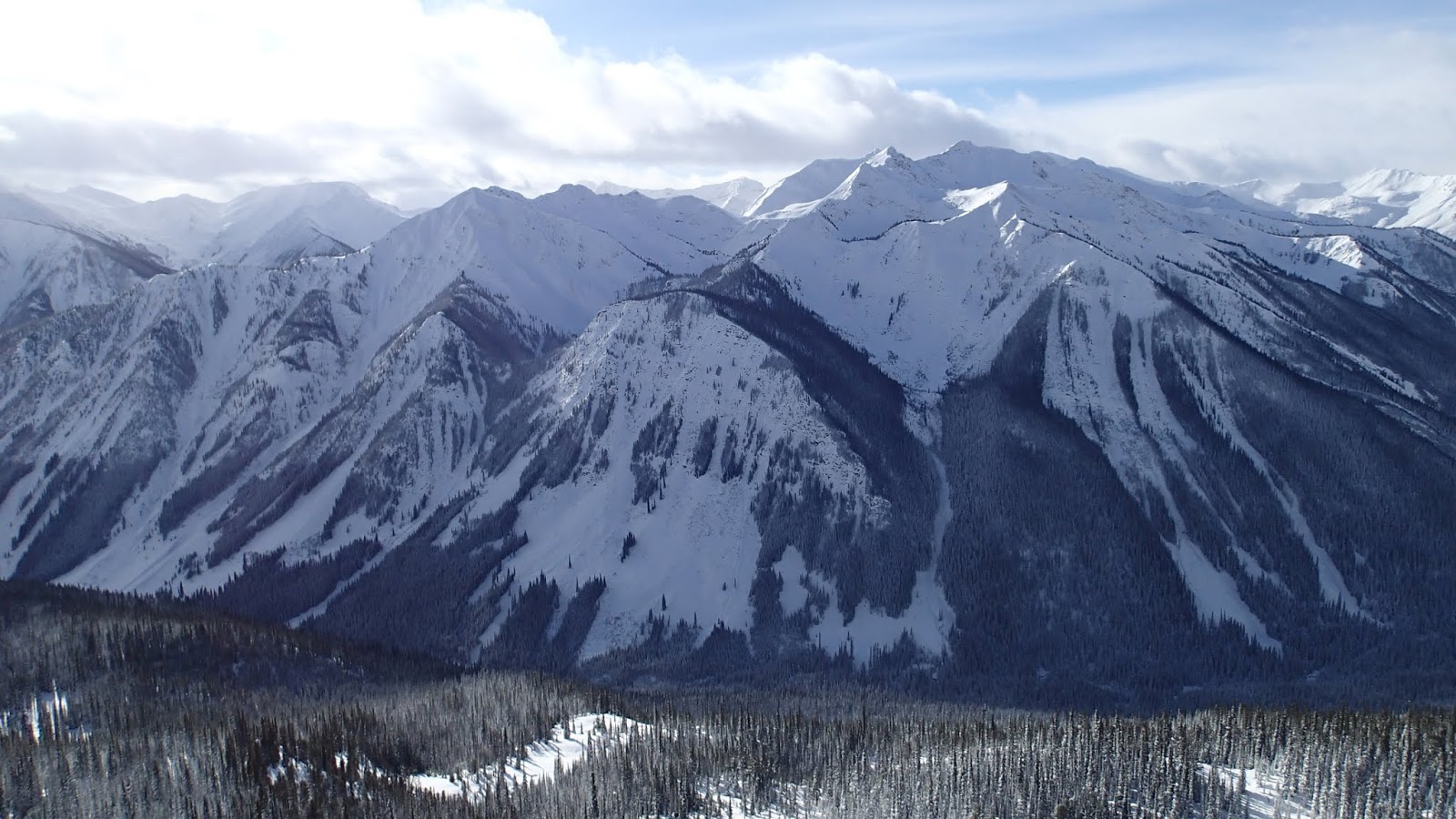 Views looking into the backside

Overview of the resort: the resort is essentially three ridges. The gondola drops you off at the center and skiing to lookers right drops you into a mid-way chair. Skiing left, your heading back to the gondola. Which kind of sucks but kind of not because it keeps it from getting tracked so quickly by slowing everyone down. We dropped into the first ridge and I was instantly hooked. This is some gnarly skiing out here and what we dropped was a beginner-esc ridge. We did a couple laps off the mid-way chair and noticed that "Stairway to Heaven" had opened leading on to the Whitewall. Dropping into Whitewall were fresh spines and cliff drops, like Alaska movie type shit. It was mind-blowing that something this steep, fresh and spiney could be found in a resort. We did one more lap on Whitewall and that, for me, made my day. I didn't care if we did any more skiing. 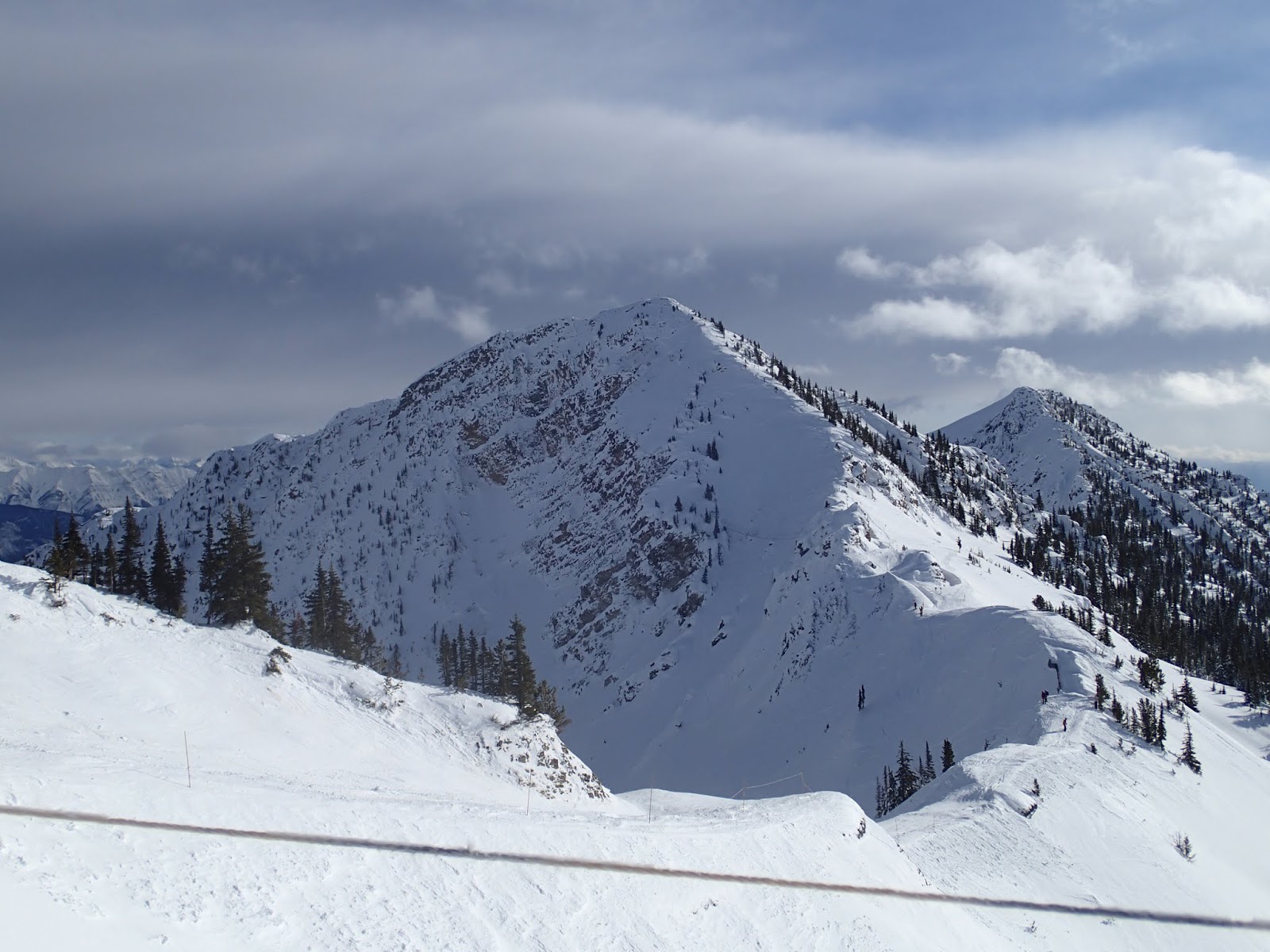 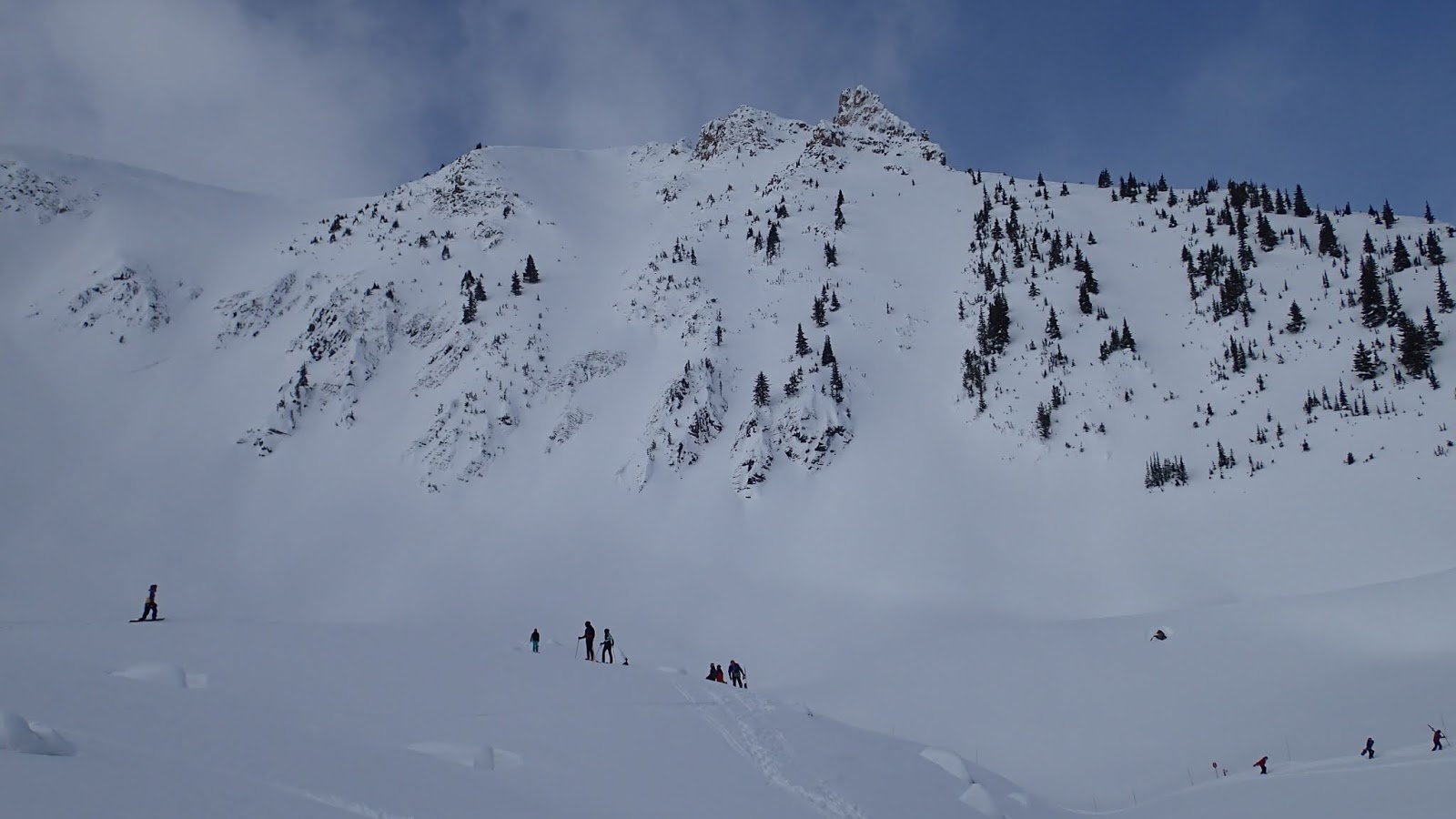 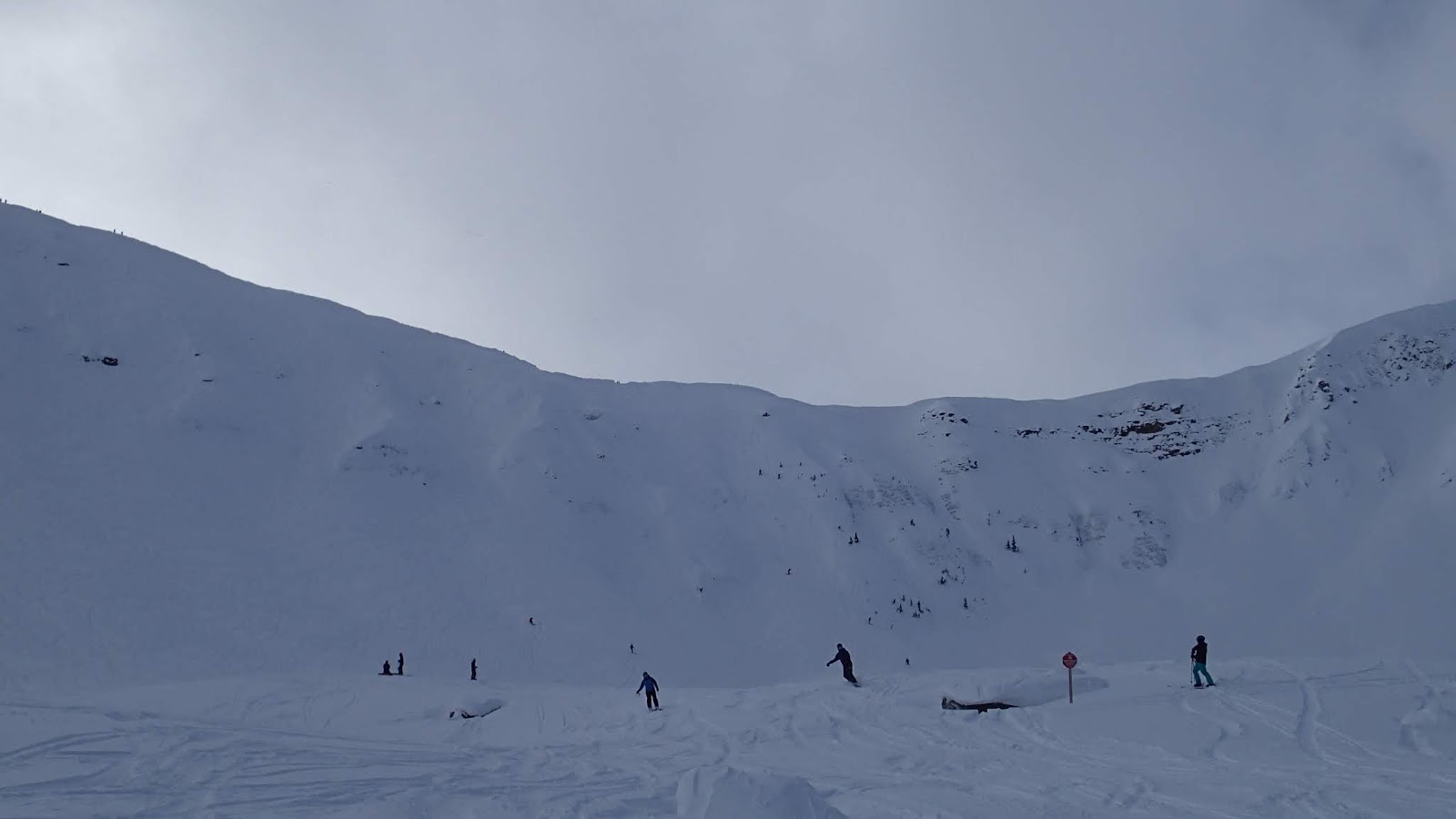 After a day as good as that, we grabbed a few beers and poutine at the Wolf's Den to watch the Superbowl. I loved the vibe at that bar - and in Golden in general - unpretentious, down to earth, no-one-cared-what-you-skied kind of vibe. Overall, Golden was fantastic and I think we should of spent a little more time there.

Day 3: Revelstoke
Revelstoke, the resort everyone knows for being steep, deep and pillows galore. But let's pump the brakes a little bit as we have to get over Rogers Pass first to get there, roughly an hour and forty-five minutes away. Let's go in the backcountry, let's do the infamous Rogers Pass...well maybe not. After witnessing in person the true gnar of what Rogers Pass is with it's 37 to 50 degree perfect avalanche paths straight to the road, glaciated peaks and when trees are present they are too tight to ski, we decided it was a great day to sight see! Fortunately for our now sight-seeing day, it was bluebird and beautiful, something rare in these parts. I noticed the further we got a long the Pass the less impressed we were. Not to say that it was not impressive the whole time but it was like, "Oh look, another massive, craggy looking peak. Never seen that before..." 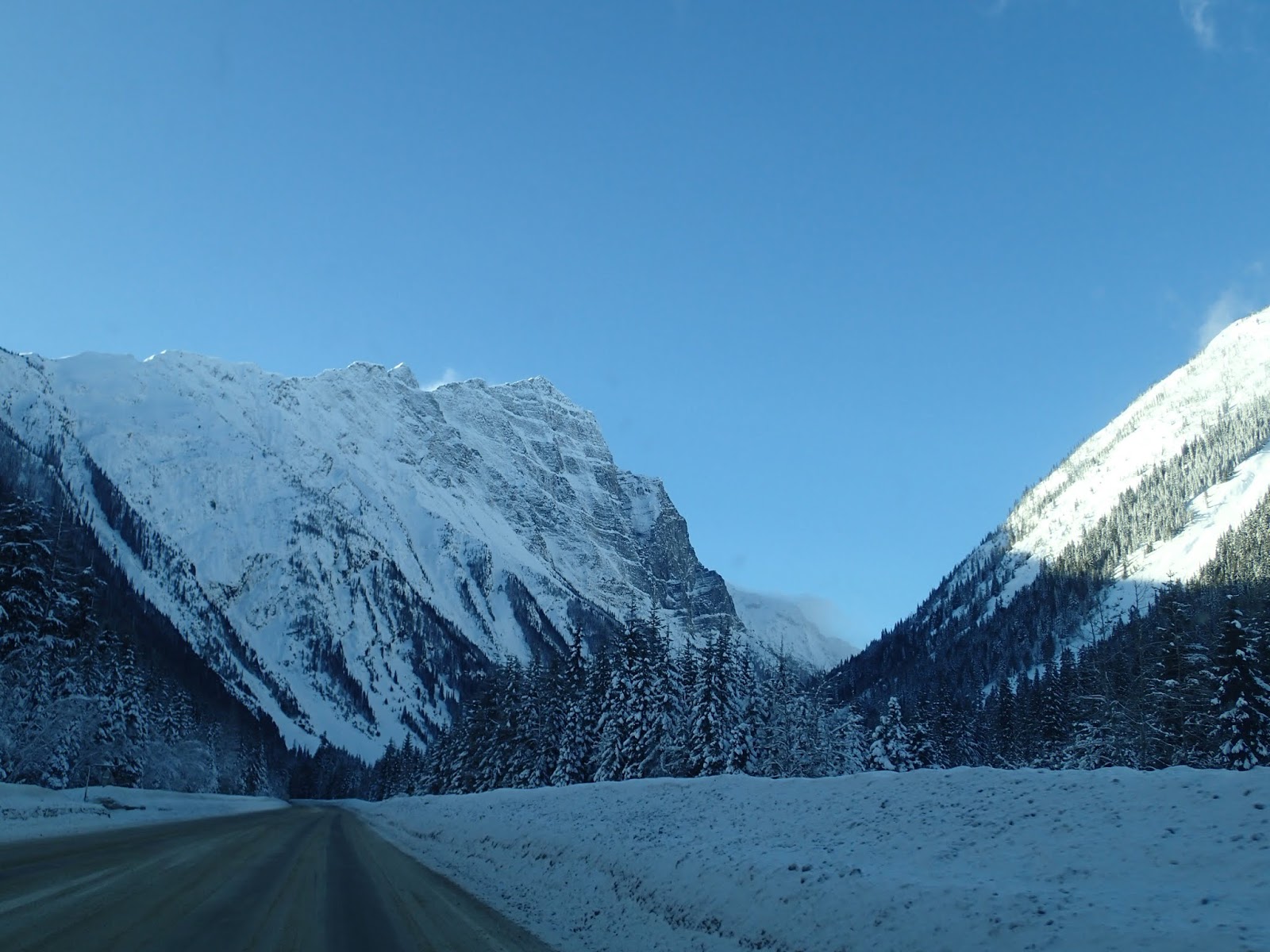 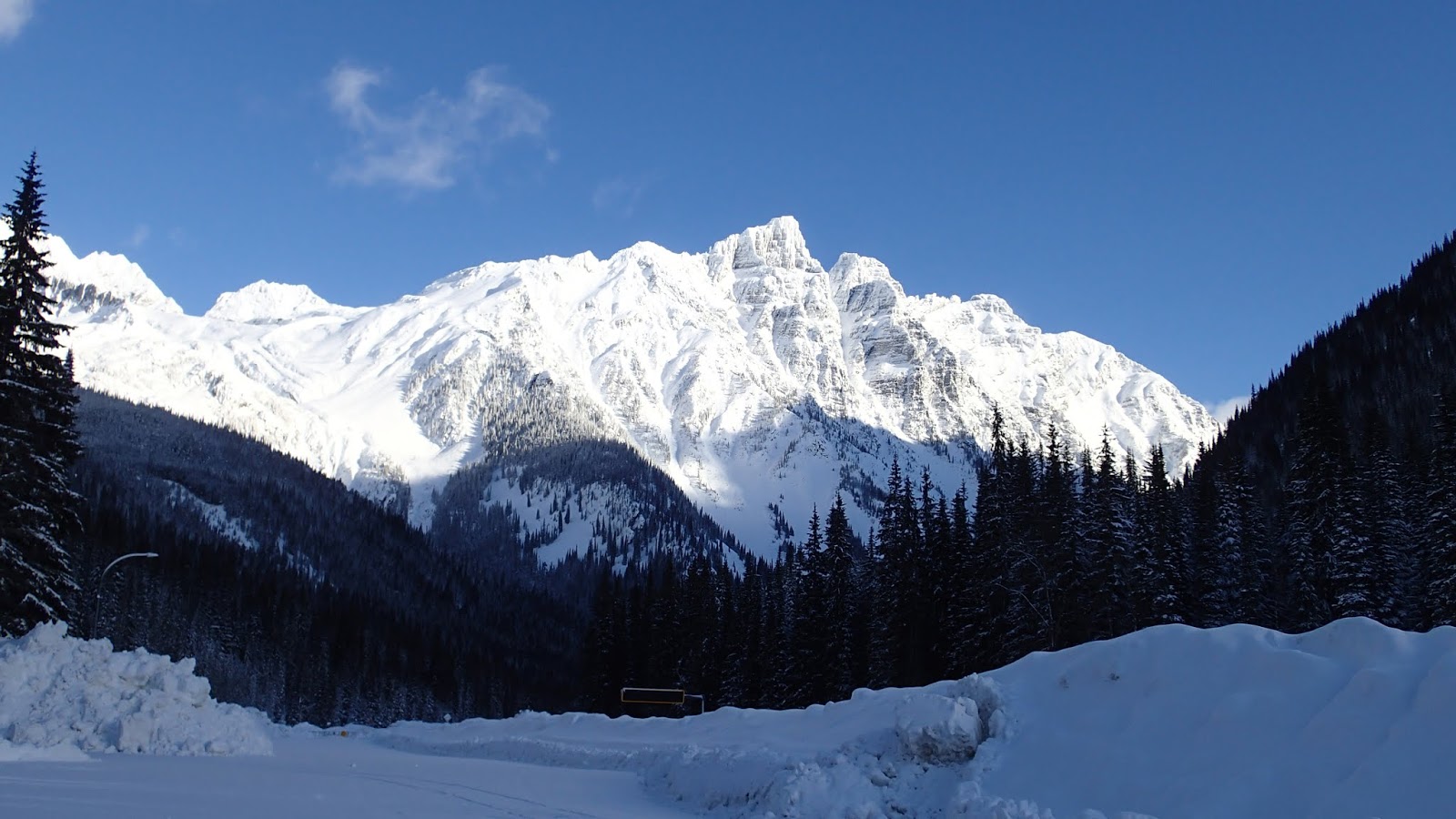 Rogers Pass
After spending way too much time on the Pass and getting mountain-peak-overload we finally made it to Revelstoke. Our half day ticket that cost us $98 Canadian actually was $75 American. To note, everything felt like it was on prodeal that it was hard not to spend money. $8 beer? More like $6. $22 pizza? More like $17. The exchange rate was far into our favor for this trip.

At any rate, we finally get up onto Revelstoke and find that it rained down low but mid-mountain and above and received a few centimeters of snow. It was surprisingly good for how tracked out it looked from afar. We did not explore very far from groomed runs but I would say overall it was a solid day of skiing. 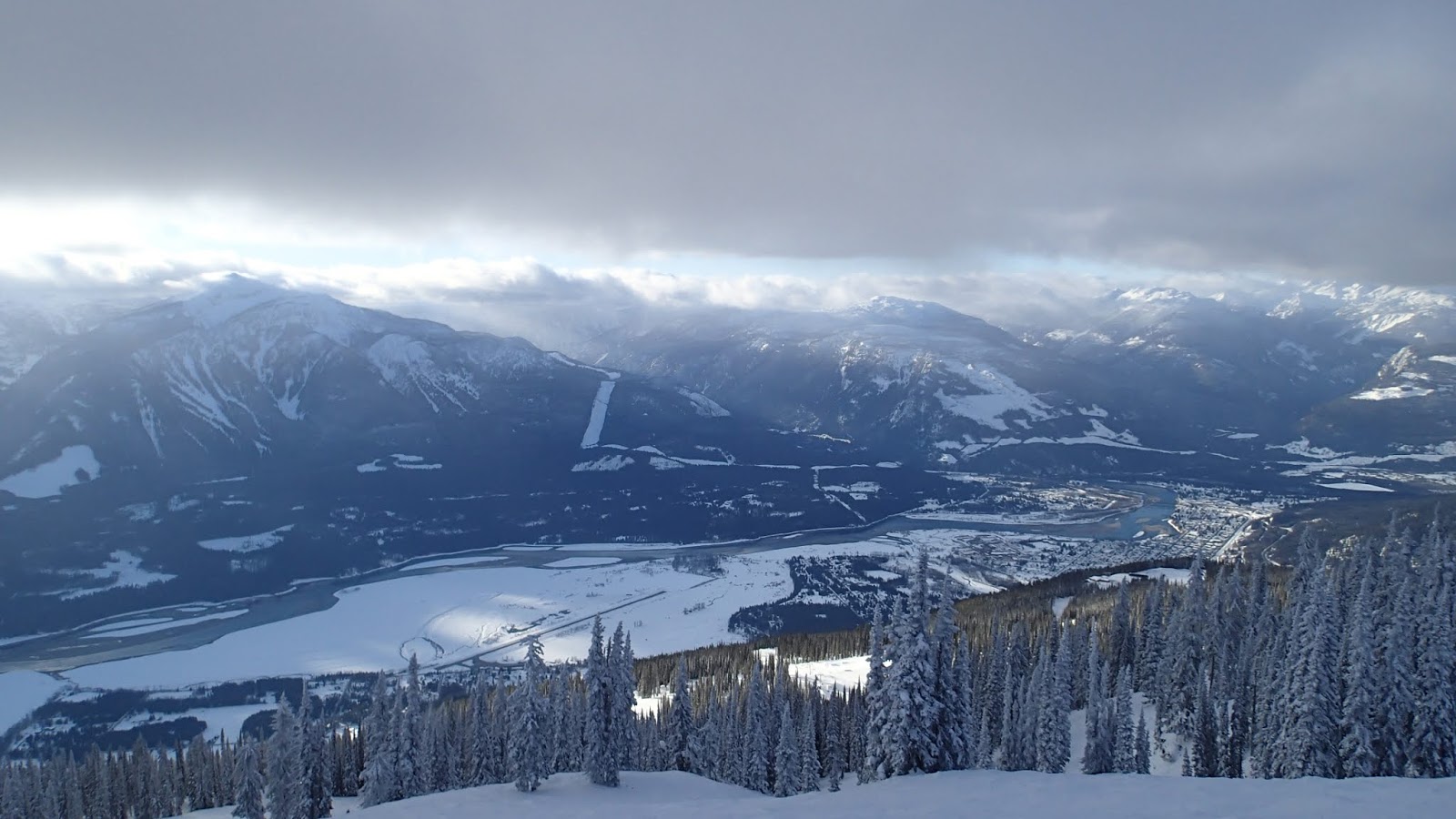 Apres and food scene there, the Village Idiot was a fun skiers spot worth visiting. On Mondays they do "Vid-iotes" and 5 people compete entering their Gopro, iPhone, Red Camera footage to win $100 at the bar based on the audience cheers. 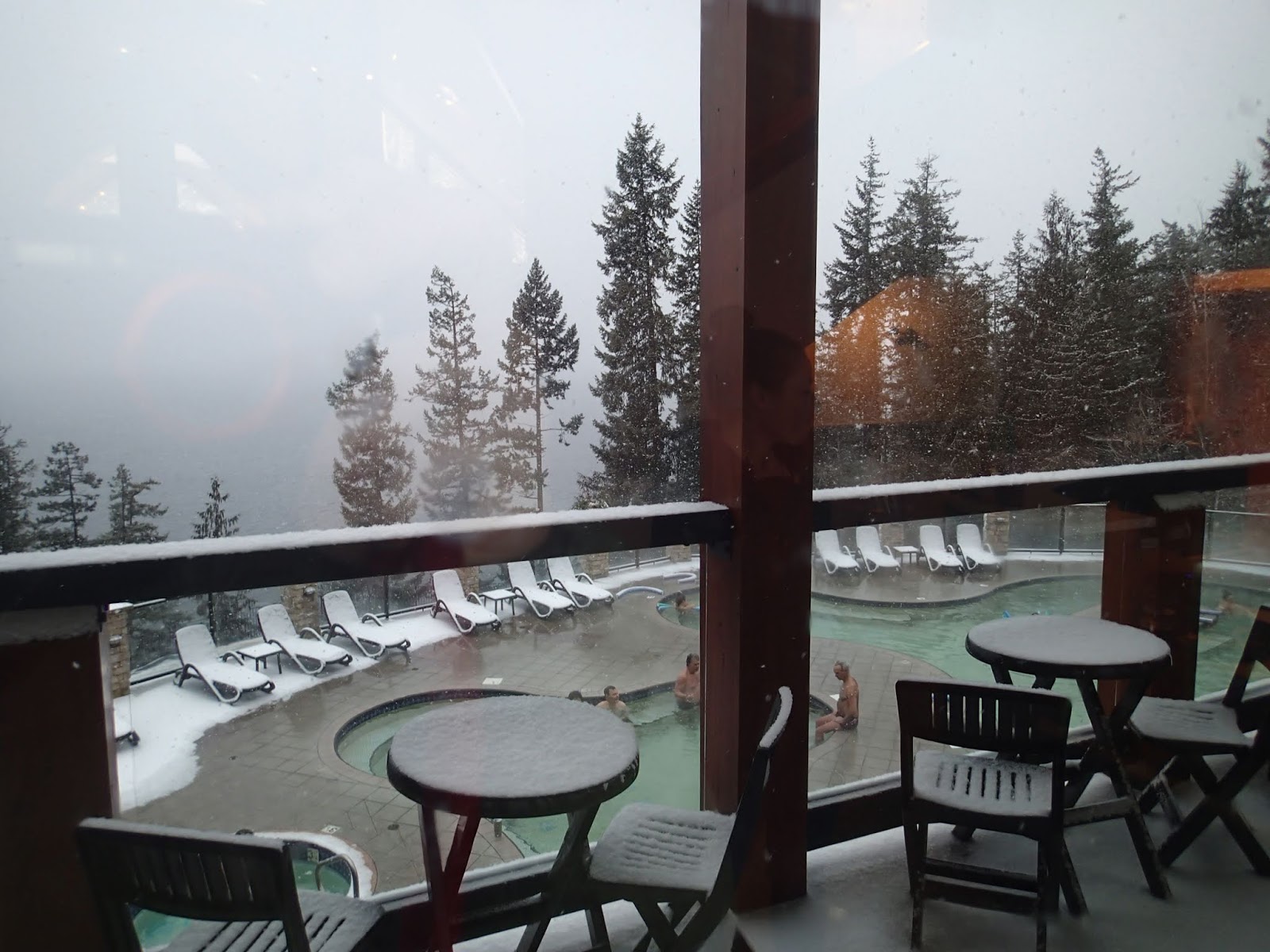 Anyone who knows me knows my feelings towards hot springs. They are boring. So boring. What do you do in them?

We, or I should say she, wanted to have a rest day from skiing and that was planned from the beginning. I said I would do a hot springs or two and we ended up only doing one and it was Halcyon. I think we were there for about an hour and a half and I can actually say it was a great time. The vibe was much different from our local hot springs. Halcyon has got mellow music going, a beautiful facility, a cold/hot/warm tubs and to clinch, it snowed while we were there. It was so peaceful that I actually relaxed/fell asleep while sitting in the warm tub watching snow flakes paint the trees in the background. 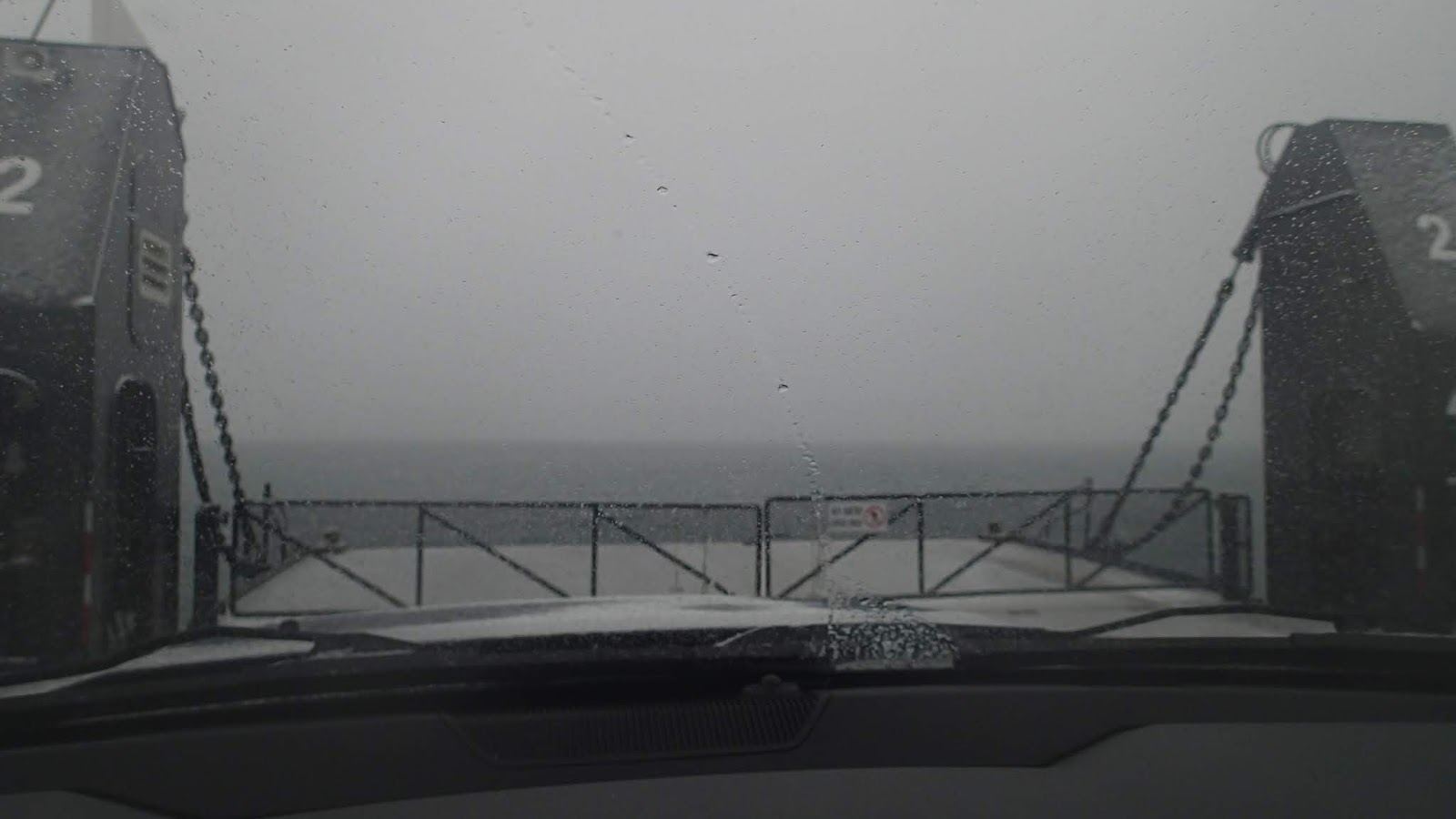 Ferry from Revy to Nelson


I would do that again. 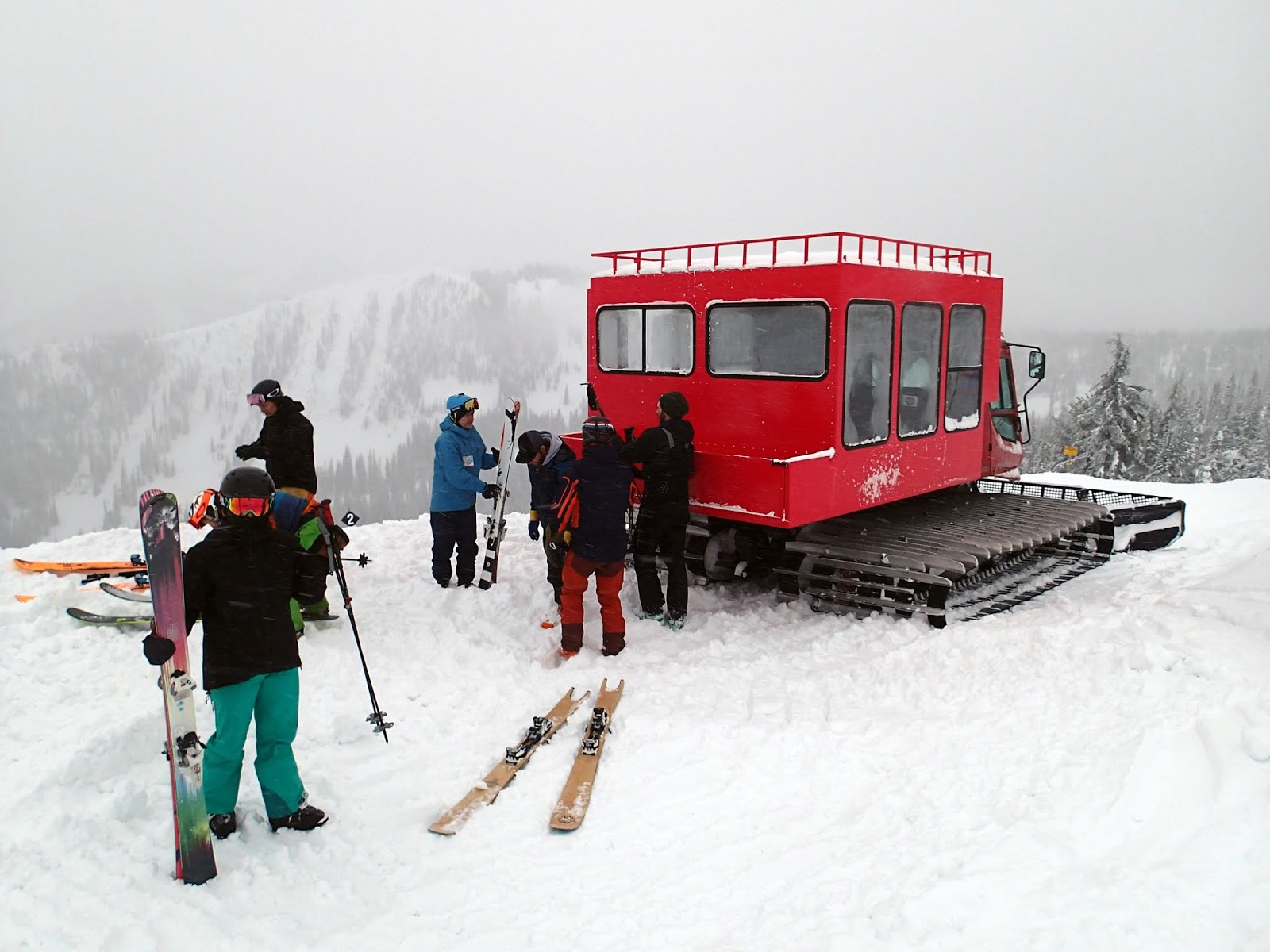 We arrived in Nelson the day before, very relaxed, and were ready to get going and checkout RED Mountain in Rossland, about an hour and fifteen away. The scenery around Nelson/Rossland was different from Revy, Rogers Pass and Golden. It was much more treed and rolling hills. Beautiful in it's own, unique way, something I noticed about every area that we saw.

We arrived at RED Mountain with minimal snow fall. We had hoped and based on weather forecasts for more. The storm(s) kept getting downgraded, but, what the hell, we are in Canada we are still going to have a good time. I wanted to go to RED to ride the cat. I have done it before but she has never and for $10 ($7) per ride, we had to. We did two laps on the cat and found maybe 2" of fresh snow on concrete. Not exaggerating there, the base had turned to concrete-hard due to the previous day's rain. Low angle skiing was fantastic but anything steeper than 30 degrees your edges were like scrapping against the street. 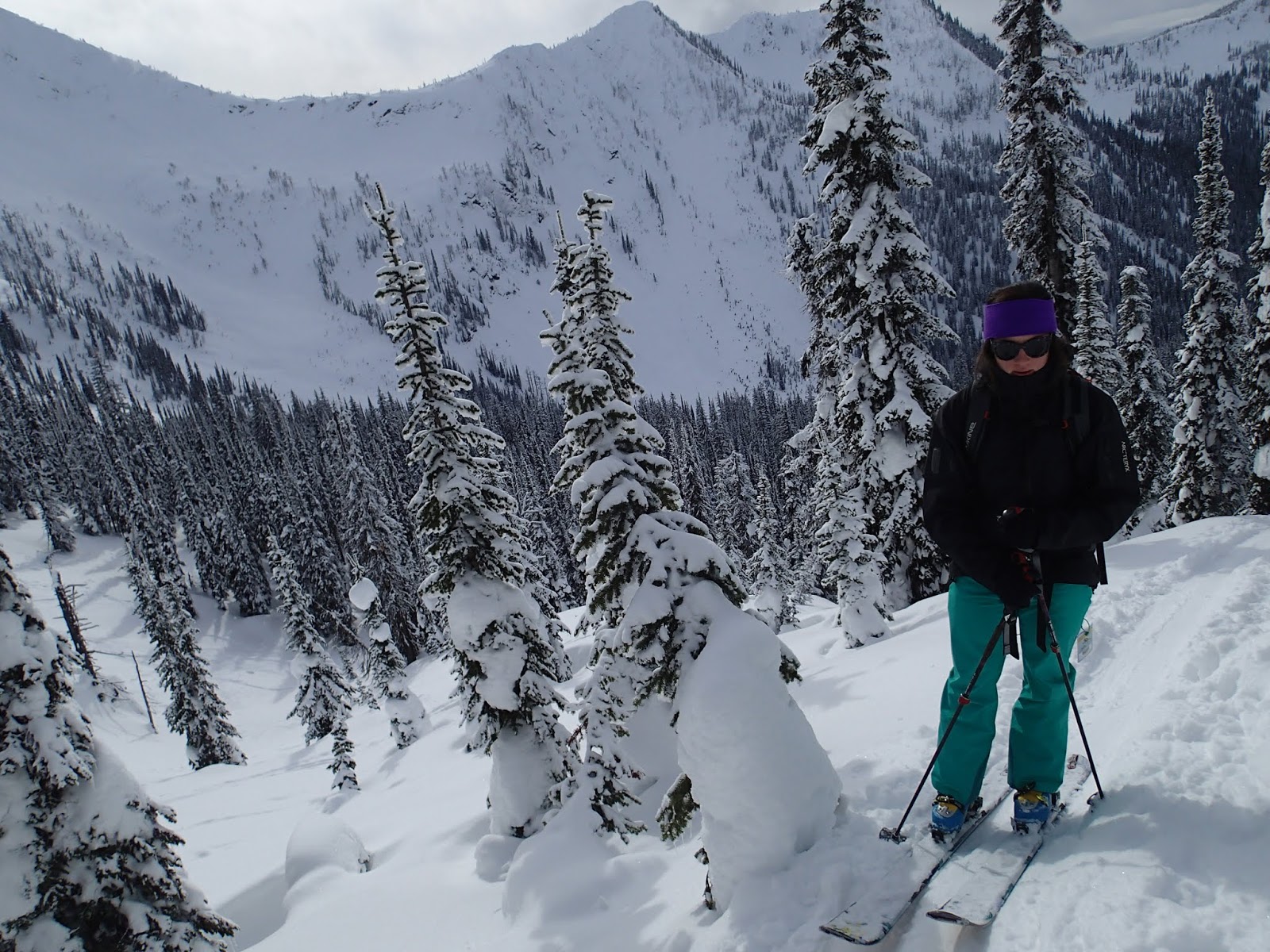 We were clinging to the edge with one finger trying to find some decent snow. It snowed all night in [Nelson] town but maybe 4 centimeters had actually accumulated at Whitewater. It was, again, dust on concrete. We had brought our touring gear as I knew we could find some mellow shots around Whitewater. The terrain there was just made for touring. The resort is two chairs, one south and one north that do not go to summits. So from the chairs, you can continue up, around, to the sides. It was a huge expansive area where they could add more chairs but I appreciate the fact that they don't. We took the Silver King Chair up to SK Ridge to find something, anything, worth skiing. There was plenty of terrain worth skiing but the limited snow really hampered any idea of getting powder shots. The sight seeing was great though, at least. We were probably up there, walking around for about 2 hours or so before dropping back into the resort. Snow was meh, but we expected that after getting so little snow. 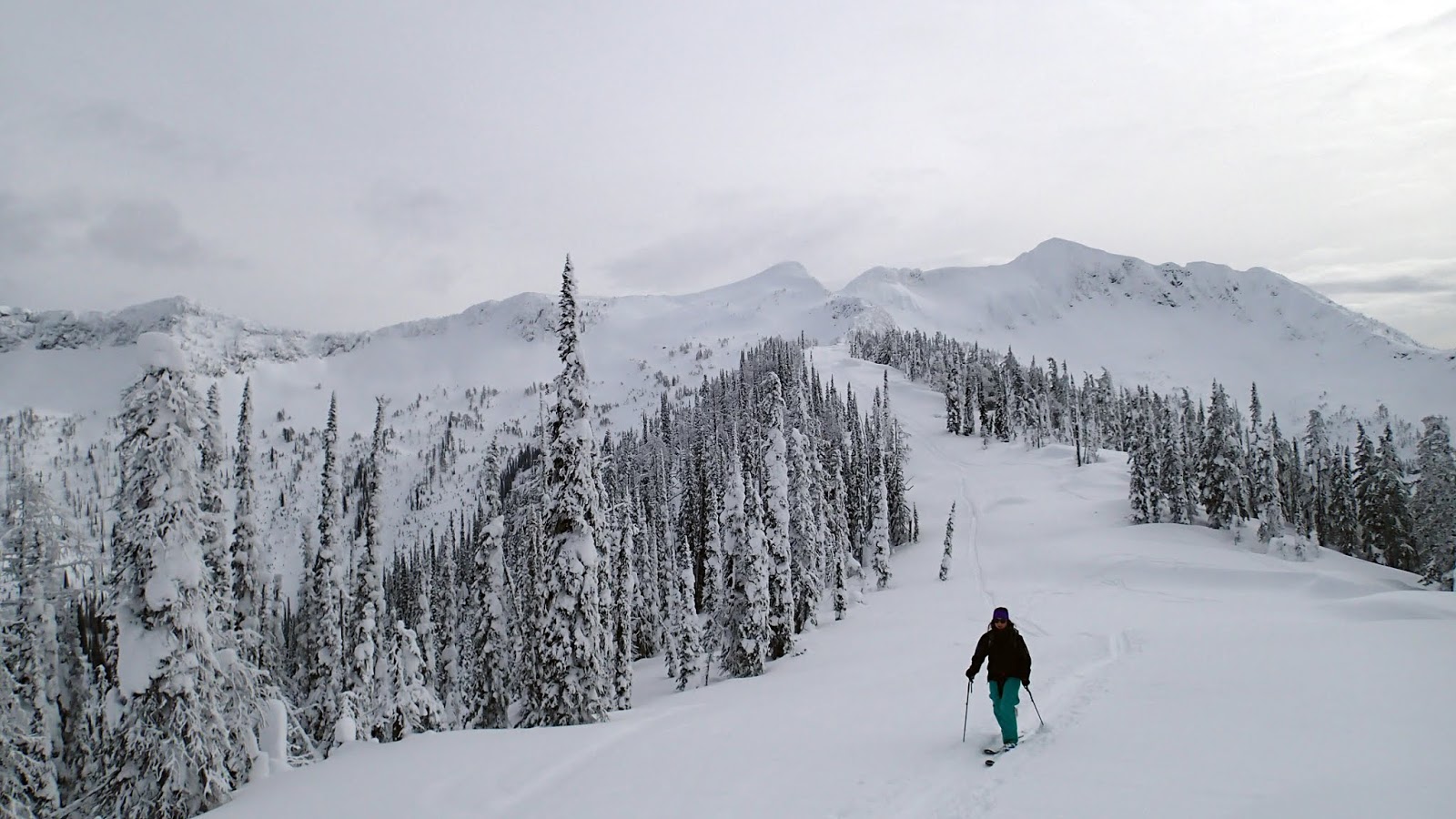 We capped our trip with a fancy dinner to Marzanos. Great food there, as this is a future reference to myself if I get back up to Nelson.

Day 7: Drive home
We had intended on staying another day but with the lack of snow in BC and the storms rolling through our home turf, we left a day early. People have asked me how the trip was and even though it was not the true "Powder Highway" as the marketing claims, it was still one of the more memorable trips I have taken. I cannot wait to get back up there, especially to ski Rogers Pass. I would love to see Whitewater on a powder day or RED or hell, any of them really. I will be back, probably sooner than I think while writing this.

Oh and it took 3 extra hours to get home, another 15 hour drive. Still worth it!
Add Comment
Canada Splitboarding
Friday, February 07, 2020