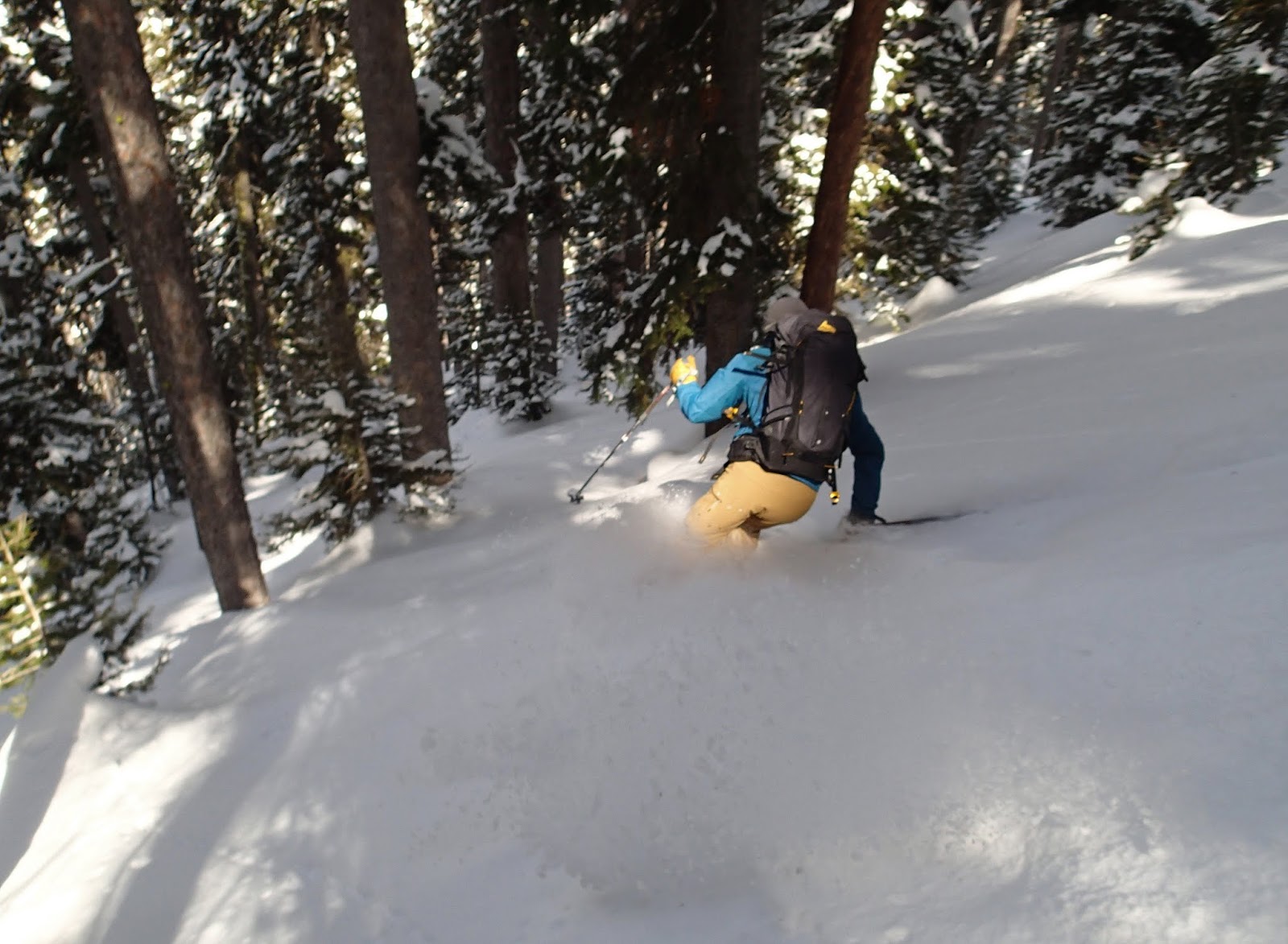 Something I have thought about doing many times and have talked about doing it just as many but the timing to do it never lined up. My motivation to traverse mellow terrain for roughly 11 miles of 6,000 vertical was always bested by the motivation to ski a big line in the Park or ski powder at the resort. With the resorts closed, the Park closed and everyone on house arrest (and keeping it local in the outdoors) this was a perfect opportunity to do this all-North-facing-skiing route. Read on to find out what it is and how it went.

If I recall correctly I gotten the motivation for this after reading about Forest McCarthy and Derek Collins going from Teton Pass to Pine Creek Pass on cross country skis for 23 miles. What's amazing of about what they did was that it was double the mileage and in 2 hours less than us. Their ascent and descents were about 2k less each but still, to think of adding 12 miles to our day would of been an extra 11 hours for us. After reading more of Forest's posts from the past, traverses seem to be his (and Derek's) forte completing a traverse of the South Pole, the Gros Ventres, Yellowstone, etc. So maybe traversing from Pass to Pass wouldn't be my thing but there was something there that I could tweak and make my own. After skiing the Pass for multiple years, different sections of it, it is obvious that it can all be easily linked up. It was more of a concern of endurance than anything.

We met at the top of the Pass around 6:00am with intentions of being out all day. It was a cold morning, about 16 degrees up top with the typical breeze blowing that is synonymous with the Glory lot. We were surprised to see two others up there heading our way and a third who went up Glory, I would assume for a pre-work lap. We wondered if there would be others trying? What a coincidence.

Heading out towards Powder Reserve we stopped early and dropped into the basin below Edelweiss. The area had seen some tracks but for the only places to ski for the last several weeks now, it was not too bad. I think it helped that we had received roughly 3" of snow everyday for about a week then got hit with a 10" storm cleaning up all of the, what I would suspect would be, farmed tracks.

Climbing up Edelweiss we were greeted to a great sunrise and what was going to look like a bluebird sky. The night before, the weather looked like it was going to be partly sunny for most of the day and a high of 39 degrees, hence why we wanted to start early. Also, we were fully aware that we are not the strongest out there and was probably going to take us to the tune of 12 hours to get all of the way across. The skiing off of the backside of Edelweiss was a nice opener, getting the legs ready for a lot of up-transition-down-transition time. My hands were frozen after one lap and I think all of the sitting at home time due to Covid has made me a little soft. All in, the first lap took us roughly an hour. I was happy with that as we were not hard-charging up. It is and will be a marathon after all. 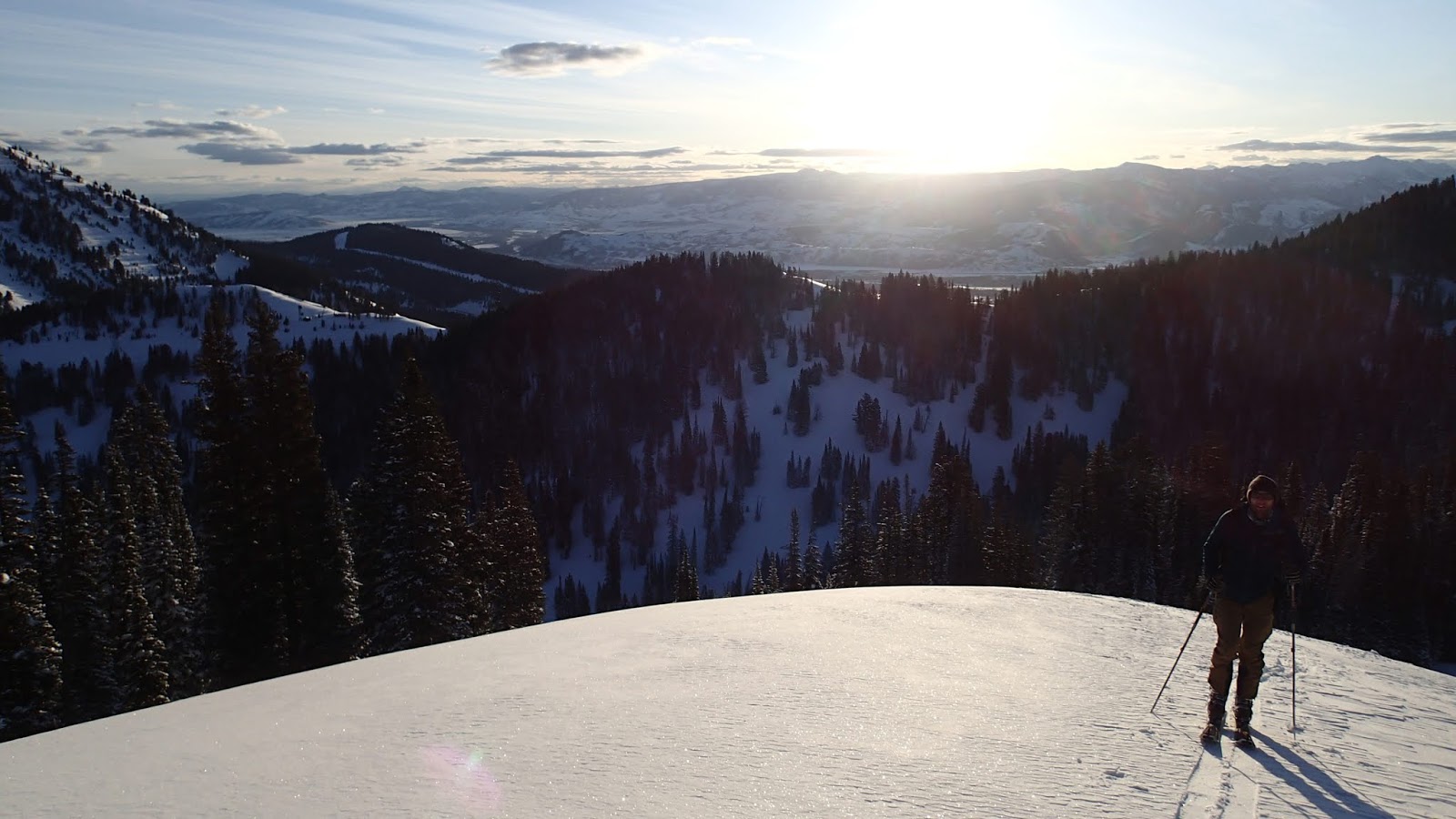 Next was climbing up Columbia Bowl. While climbing up I had noticed that not much had been skied even though the main parking lot has been packed to the gills everyday. Our Pass Ambassador had stated earlier that he had seen twice as many cars in the past couple weeks, from 300 to 600 cars a day. I had two theories to this; beginners are getting into the backcountry and are skiing Glory only or there really aren't that many people getting out. And then there was a third, people are over skiing, but that can't be correct. I don't know. Getting to the top of the bowl produced some fantastic views, and also, dropping the north-side of Columbia was another treat from Ullr producing some shit-eating grins and woohoo's. 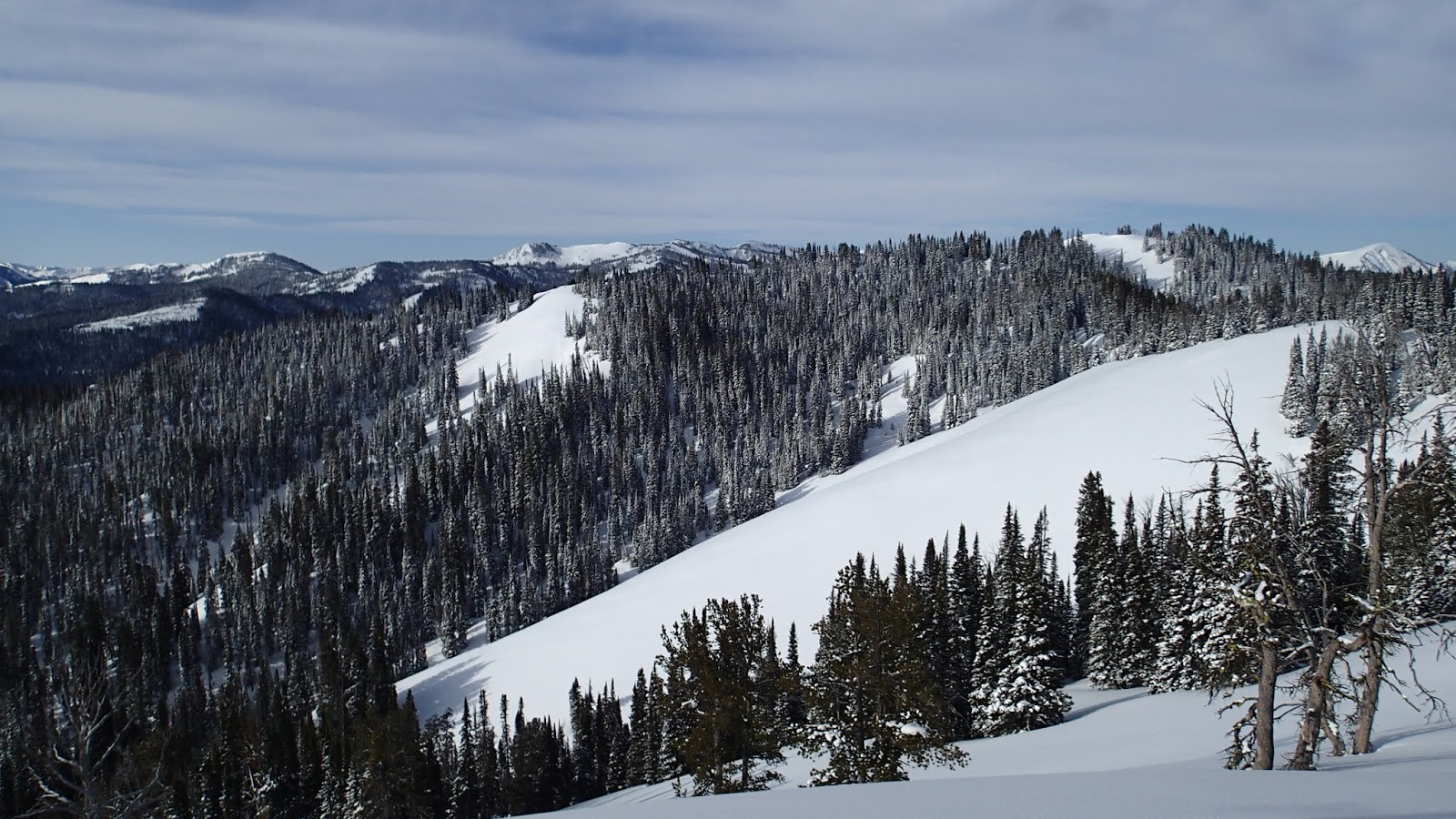 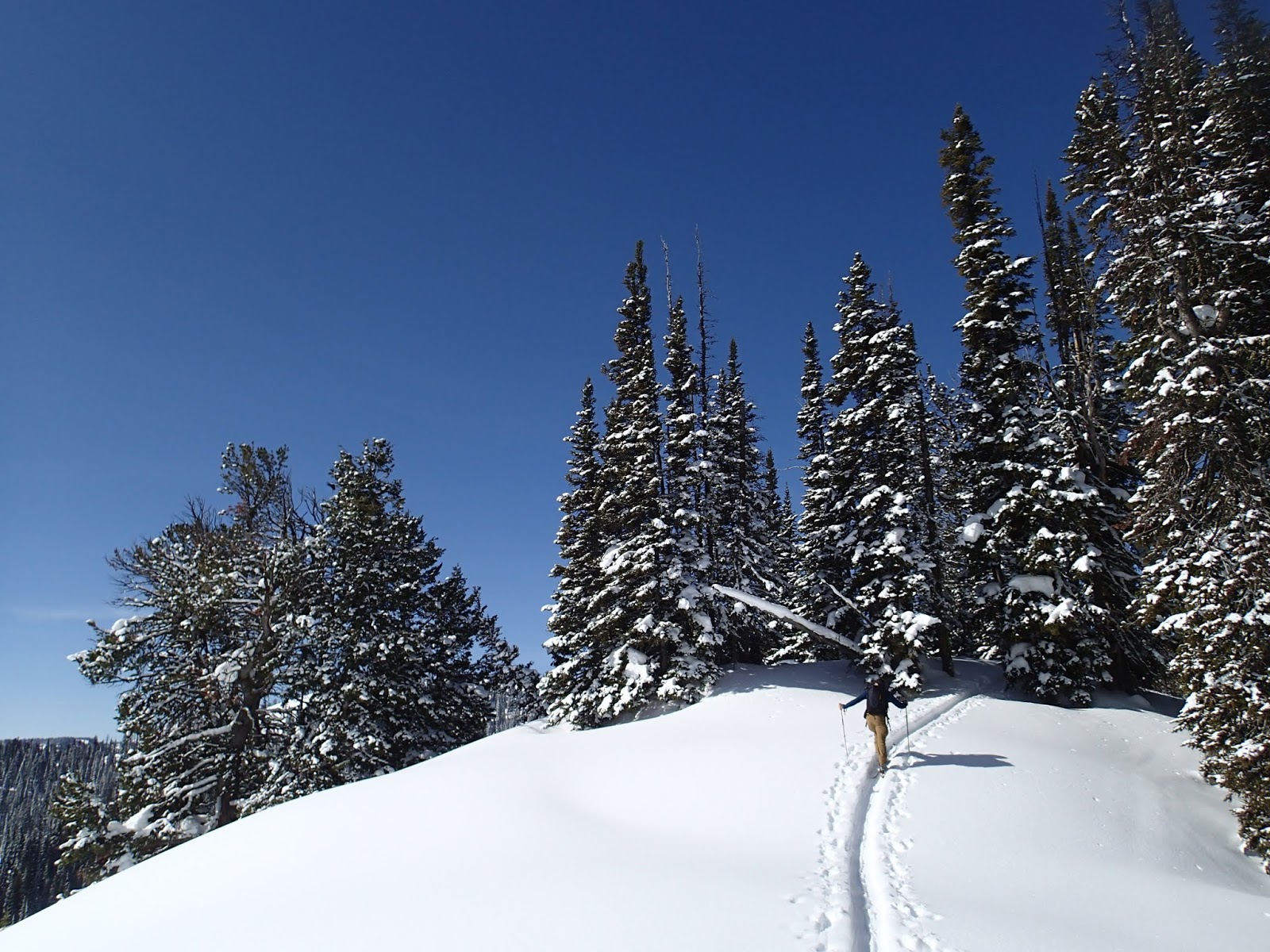 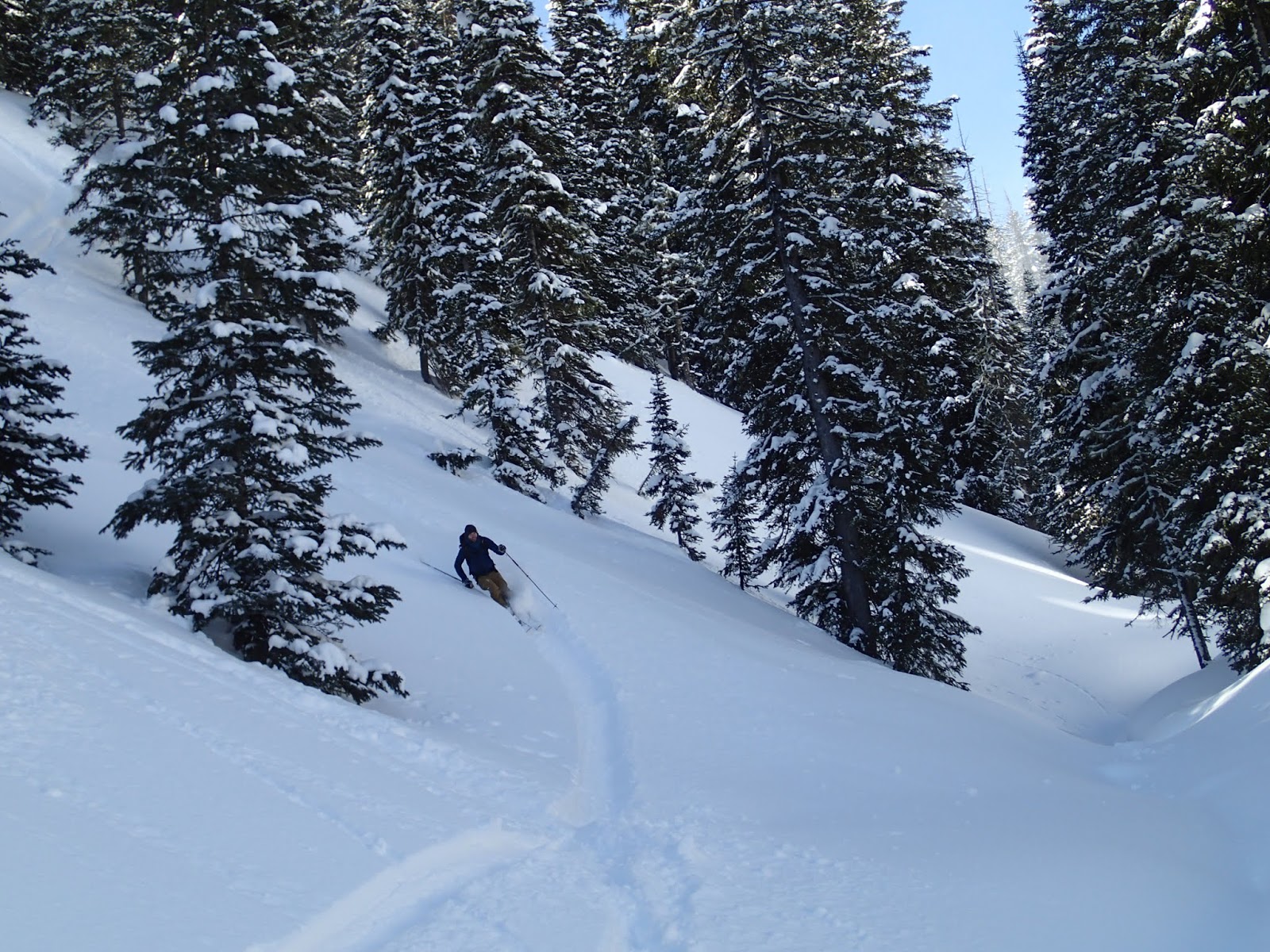 Next up, was going up the ridge between Columbia and Windy Ridge. This was another repeat of the line before. Great tree skiing and plenty of powder. Sorry, no photos and nothing of real value to add here, so I'm moving on quickly.

Climbing Windy Ridge was next. 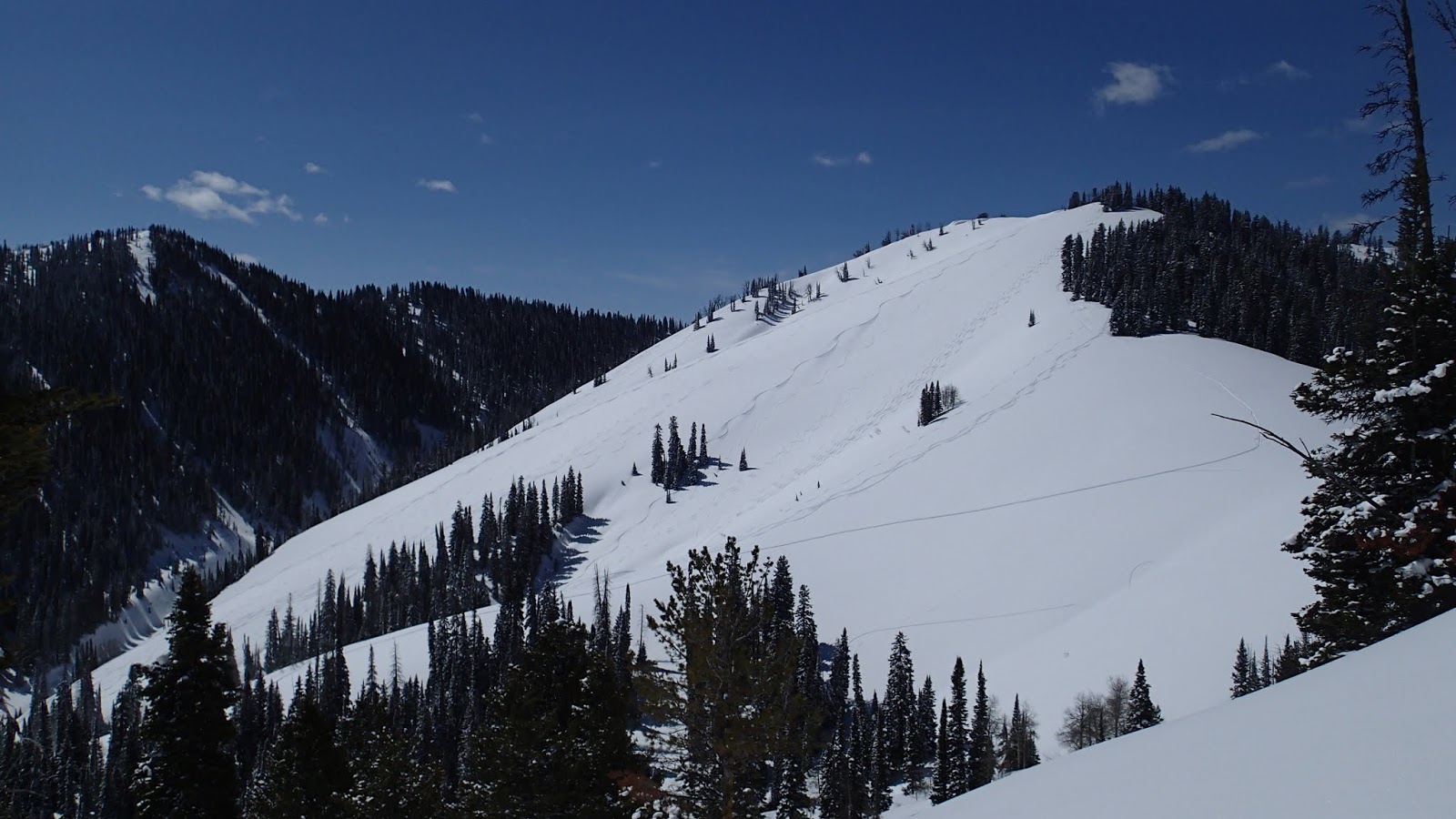 Windy Ridge had not seen many tracks, again, which is shocking to say as Windy Ridge is pretty low hanging fruit on the Pass. We had crossed paths with someone, more senior than us, in the Windy Ridge basin who was continuing onto somewhere else that had not been tracked. I think the old timers out here have a higher standard of what is considered untracked to compared us young-ins. I would of been stoked to see the area with so few tracks, yet for him, was not good enough. I can support that logic.

At this point in the day the snow had seen significant sun, rising temps causing a drastic change in the consistency of the snow. We also saw a dramatic collapse of our pace as we had horrible glopping on our skins and warmed consolidated snow on top of our skis making it feel like our legs were being weighted down by those 10 lbs ankle weights. I did not want to complain though, the sun was out, I was outside and not reading another news report.

Skiing the backside of Windy had remained fantastic. The north facing shots, especially in the trees, stayed cold and it provided. 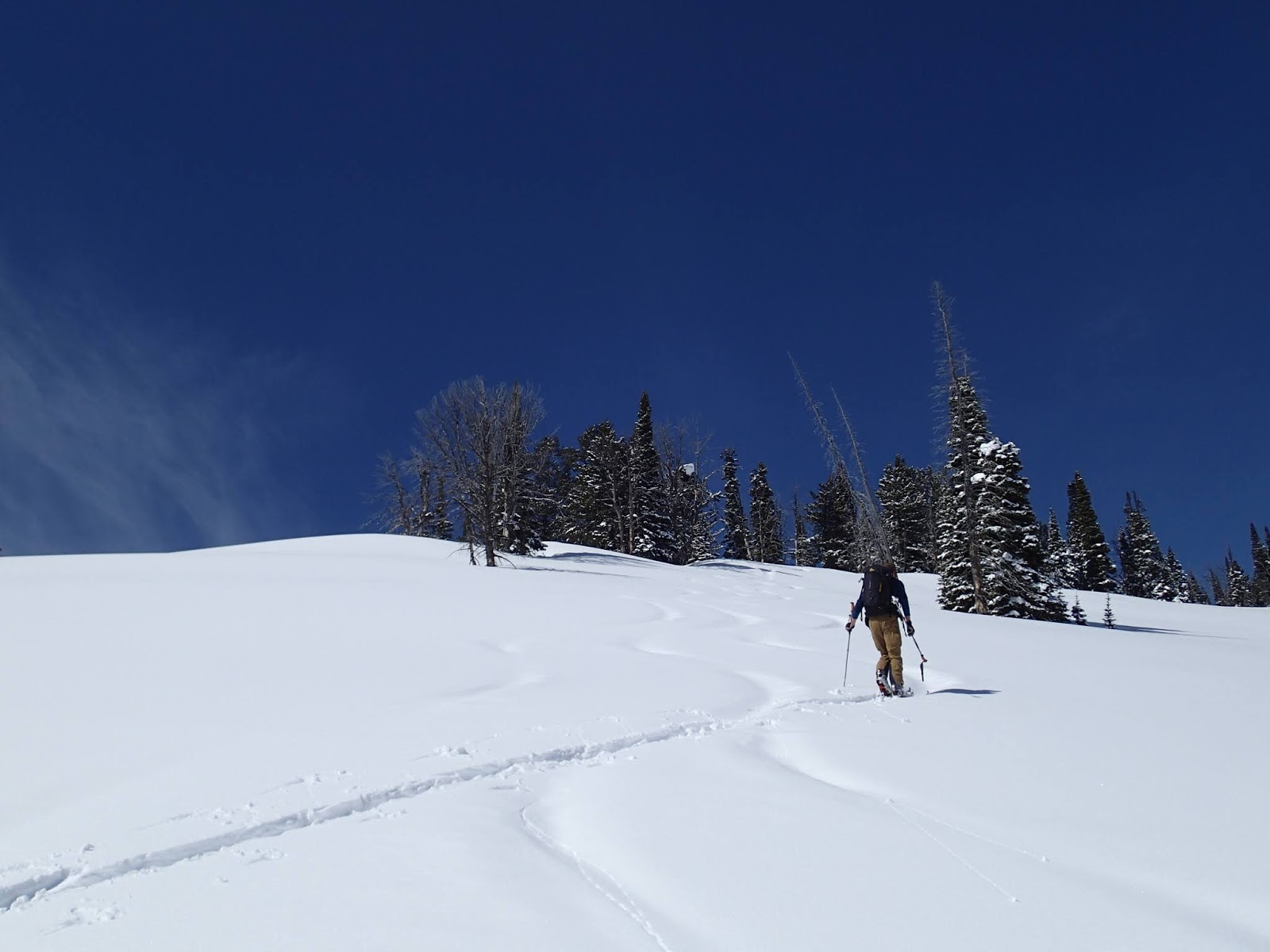 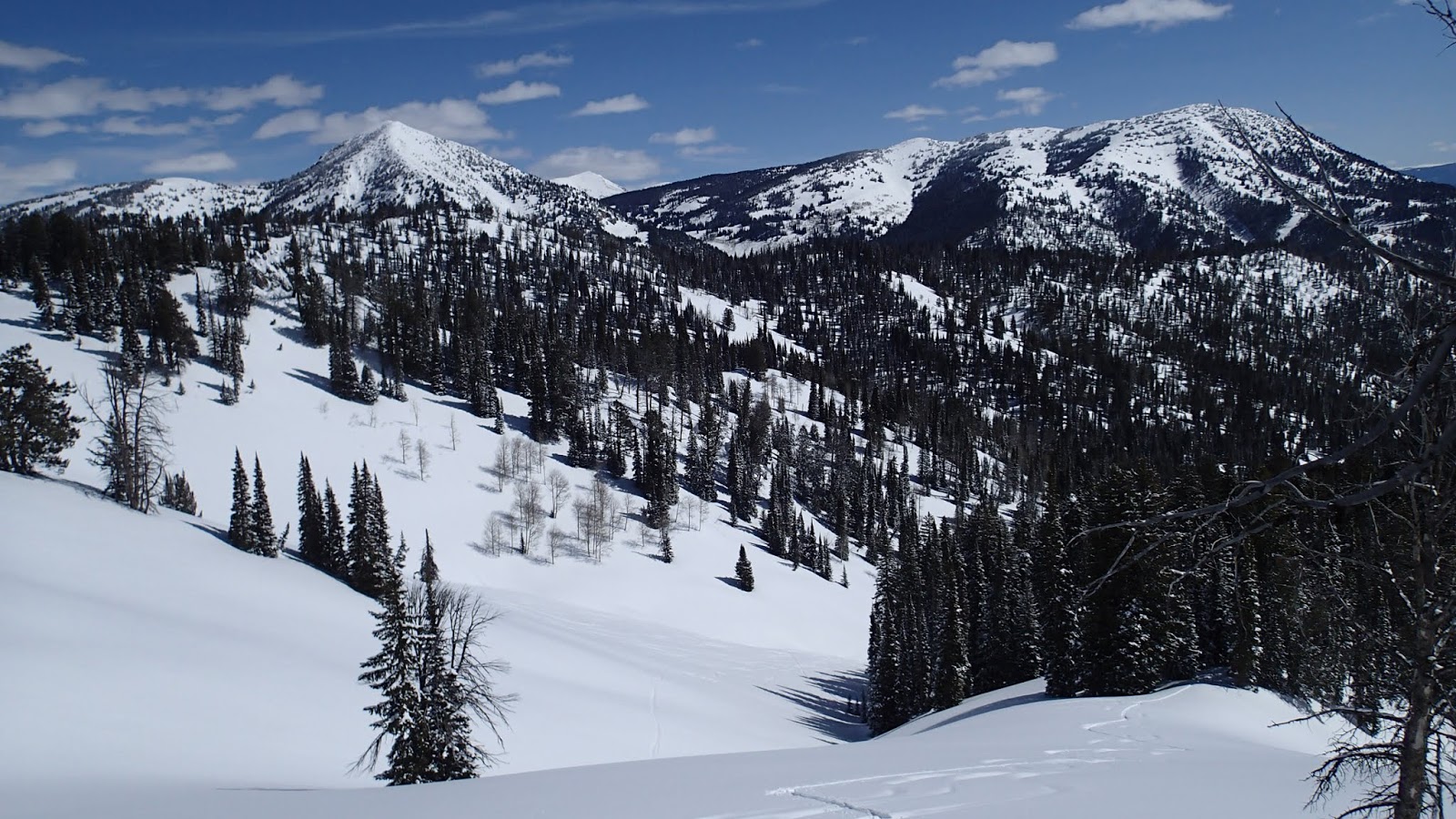 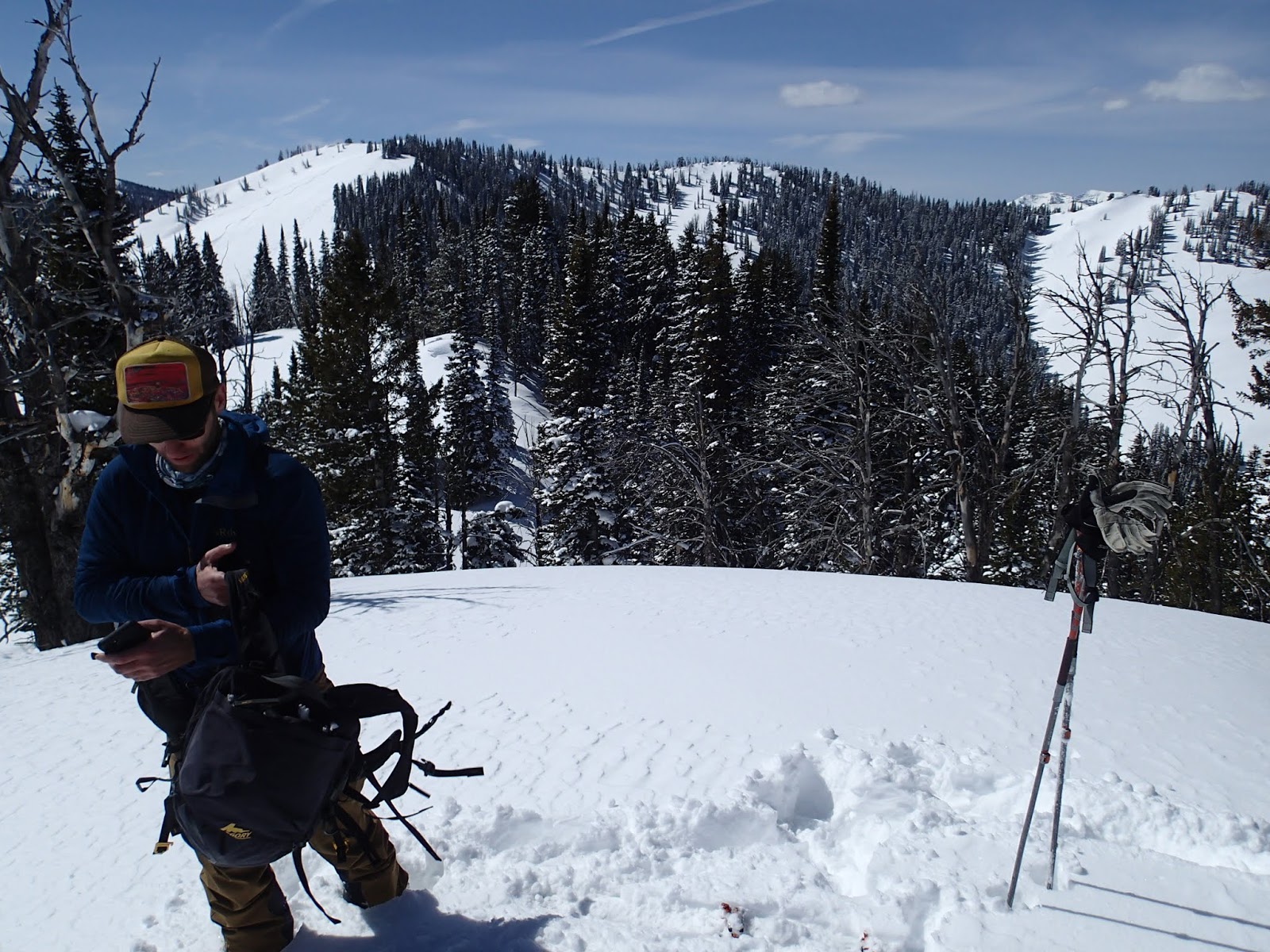 We had just finished skiing the backside of Windy Ridge, a first for me, into Burbank Creek. I have been told that this place is a black-hole-like place as the trees are tight, bushwacking is the only way out and the skiing is terrible, if you even get to slide downhill.

It was not a great time coming out of Burbank. We were in a sense, in a black hole, far away from our destination that felt close when looking at a map. We walked for a quite a bit, traversing around this tree filled bowl. Eventually we said screw it, hiked up instead of around to gain an extra 600' to earn a 1200' shot of skiing that landed us in a creek bed looking at the face we should've been climbing in the first place. We were not disappointed with our decision. The trees are perfectly spaced in there and I am sure we were some of the few tracks and probably the last tracks for the year. 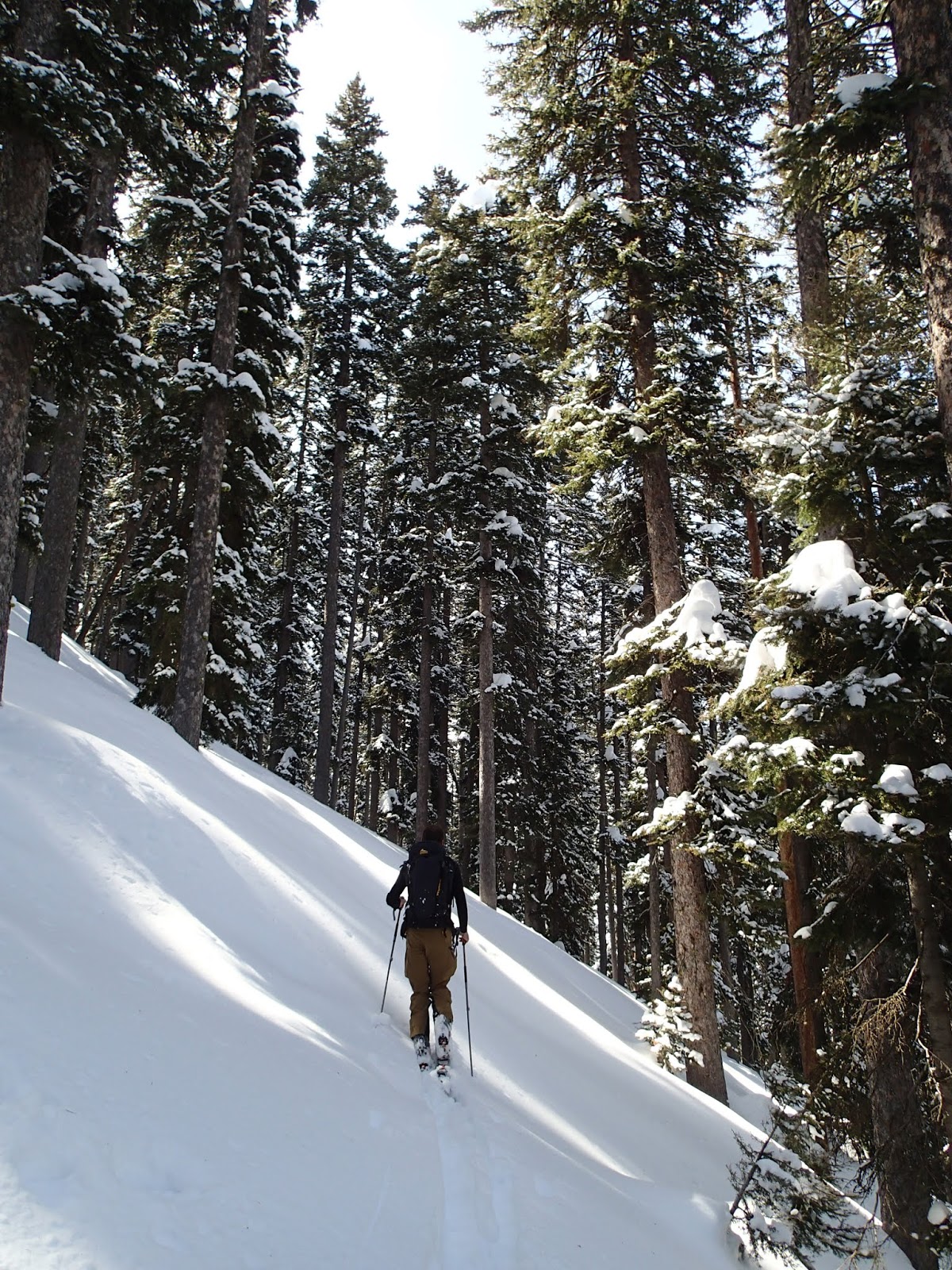 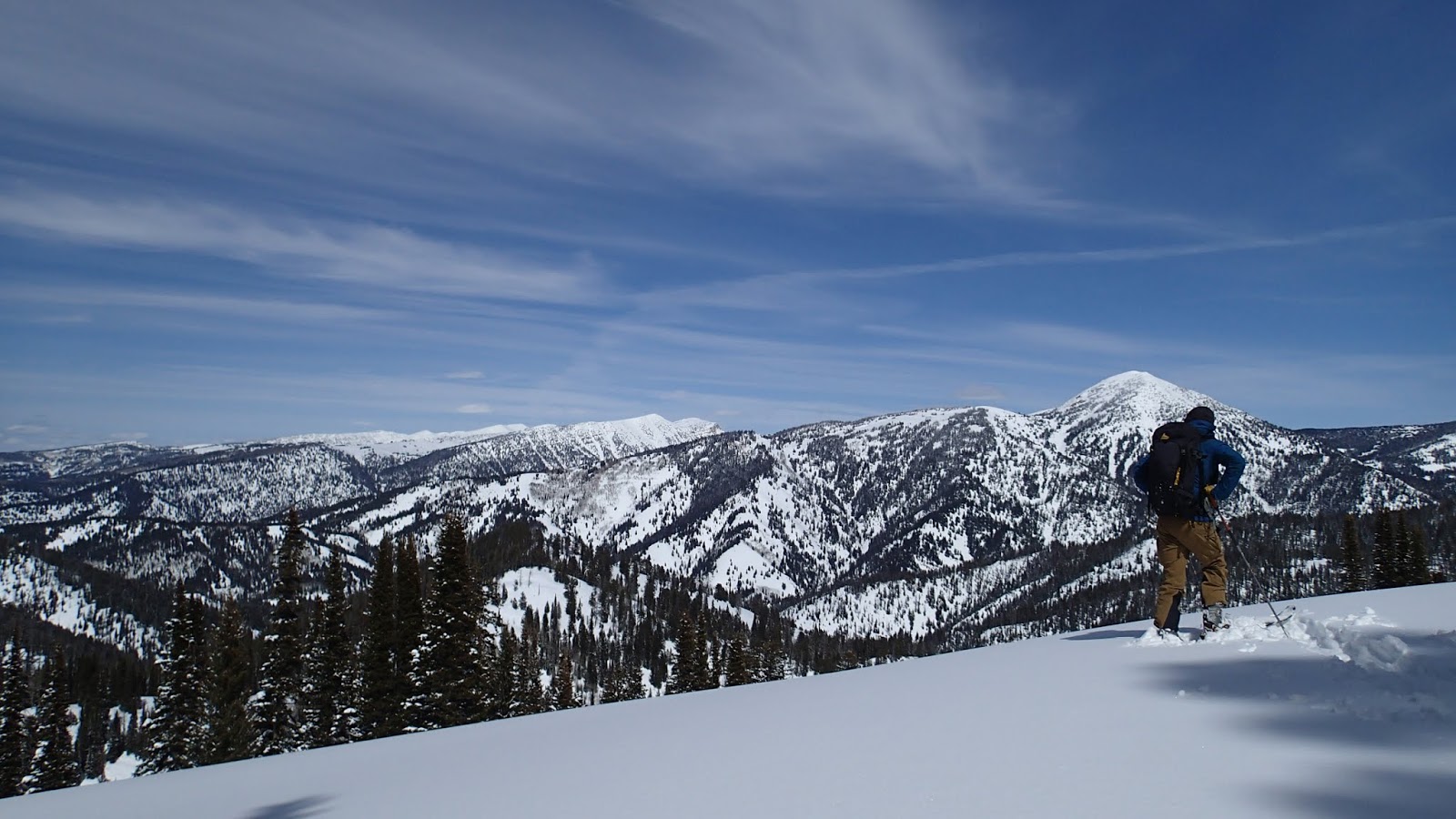 Once we finally got out of the shadows of the Burbank Creek trees we realized how warm it had gotten. The glopping was horrible on the skins and the snow build up was insufferable on our top sheets. It was a "salt in the wound" as we had already covered 9 miles of 4500' (or so) of hiking and skiing. We continued our way up to Oliver, the final destination.

After what felt like 2 hours of climbing through completely unshaded areas we made it to the top of our 7th summit/perch. The sun still full-on and a bluebird sky above you could see the Grand from where we sat. We arrived there, I laid down fully sprawled out in the snow with the sun on my face. Felt so good to be there, accomplishing what we set out to do and just enjoying the scene/day. We knew the snow was going to be shit by the time we got here but again, it did not disappoint.

Both of us were a little wobbly coming out of there but I admit that I was surprised at how tired I wasn't. I expected to be "crawling" to the summit of Oliver. Not like I was smiling and chatting up my partner but I did feel like I could go to another hill. It would probably take forever though, who am I kidding?

If anyone is actually reading this in full and considering doing this, I would do it. We discussed it while on the skin track and don't believe it would have been as fun if it was cloudy and stormy but we lucked out with great weather. Also, the skiing was great from start to finish but what made it memorable was getting back to these viewpoints that not many people get to see. Like many adventures while out touring this has opened my eyes to more and new terrain, and I look forward to those adventures next Winter because as I sit here typing this, it is 45 degrees and raining. I'm sure we were not the first to do this, nor will we be the last and it probably will not be the last time I do it. I would it again. 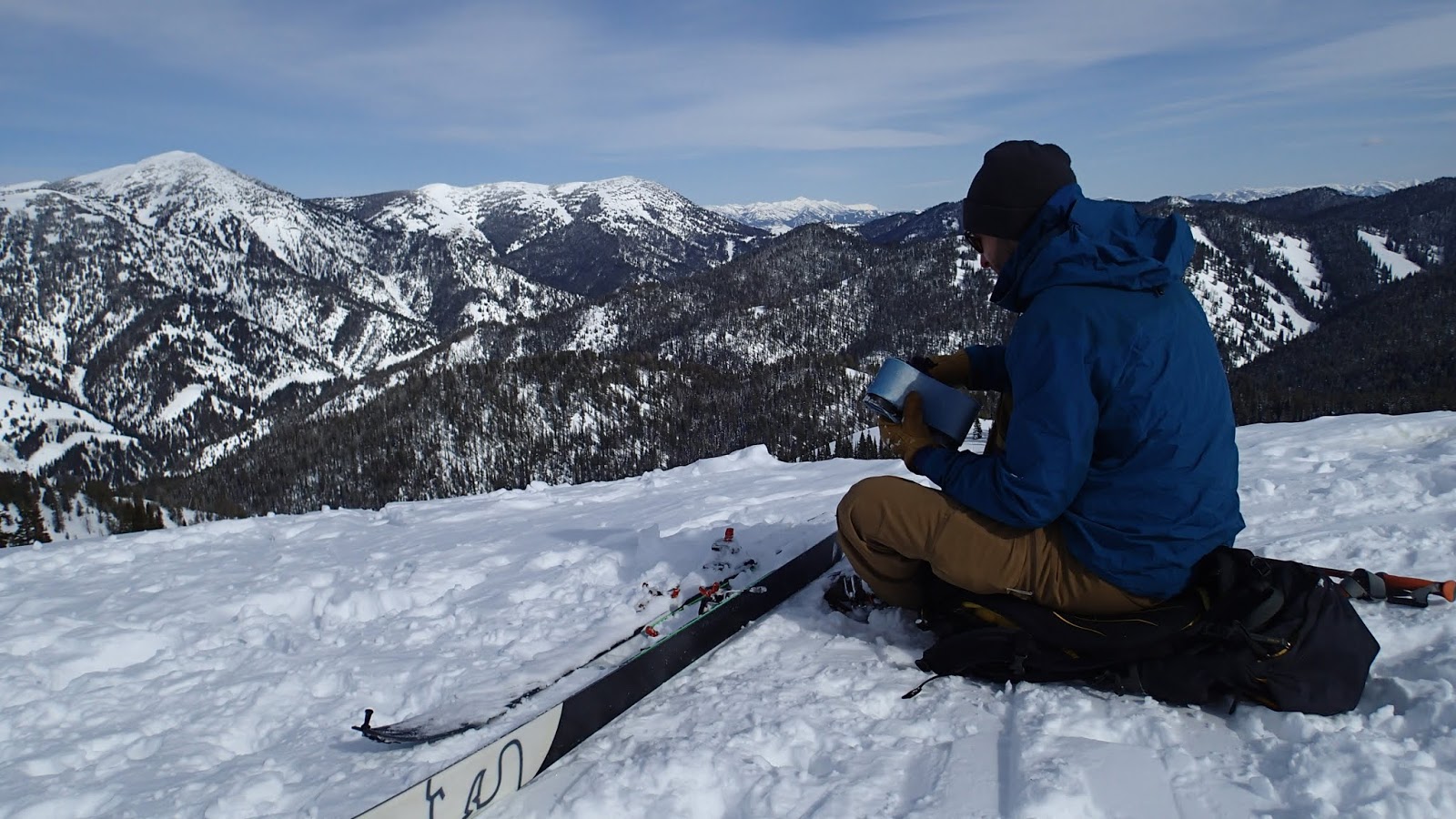 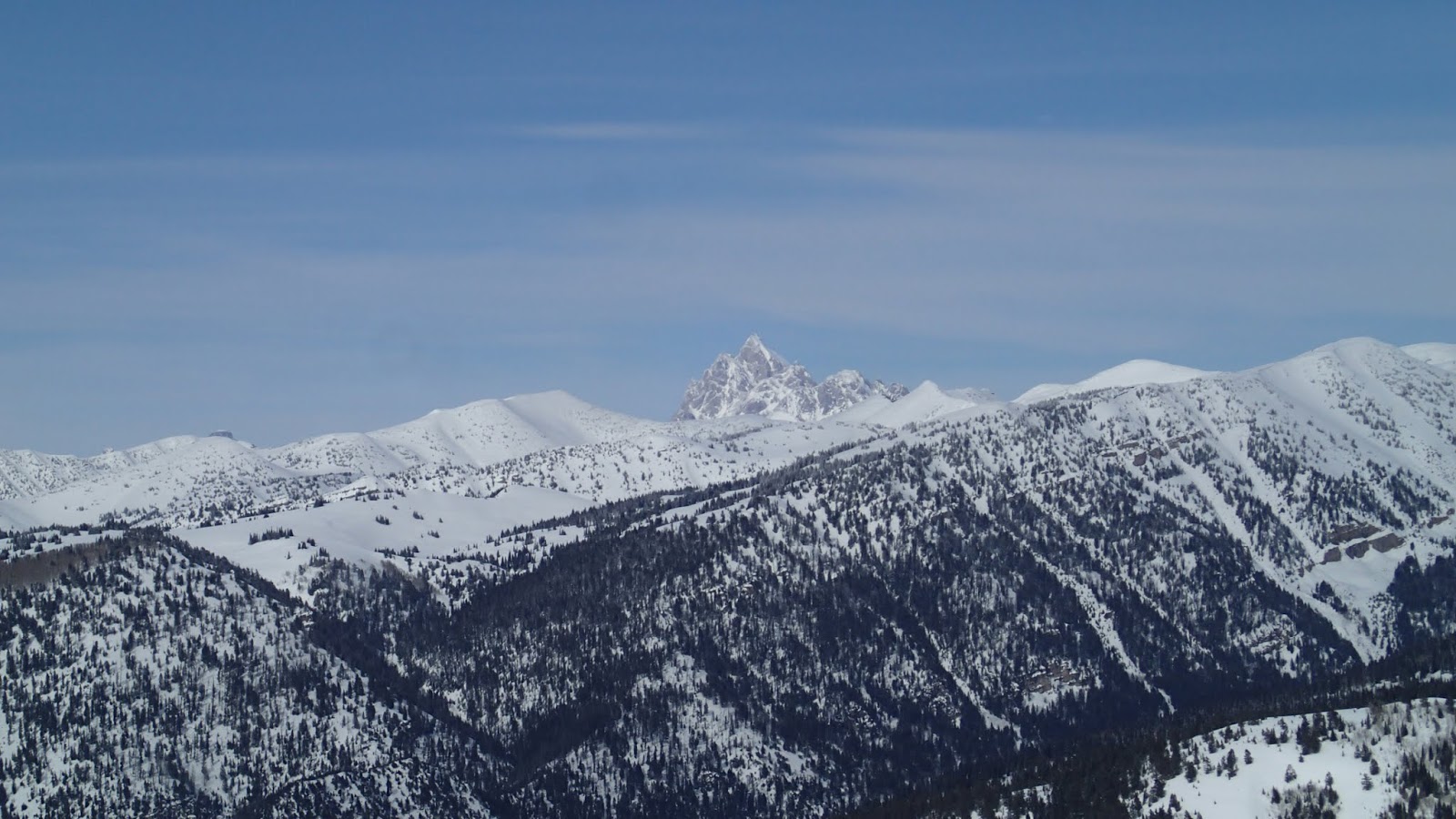 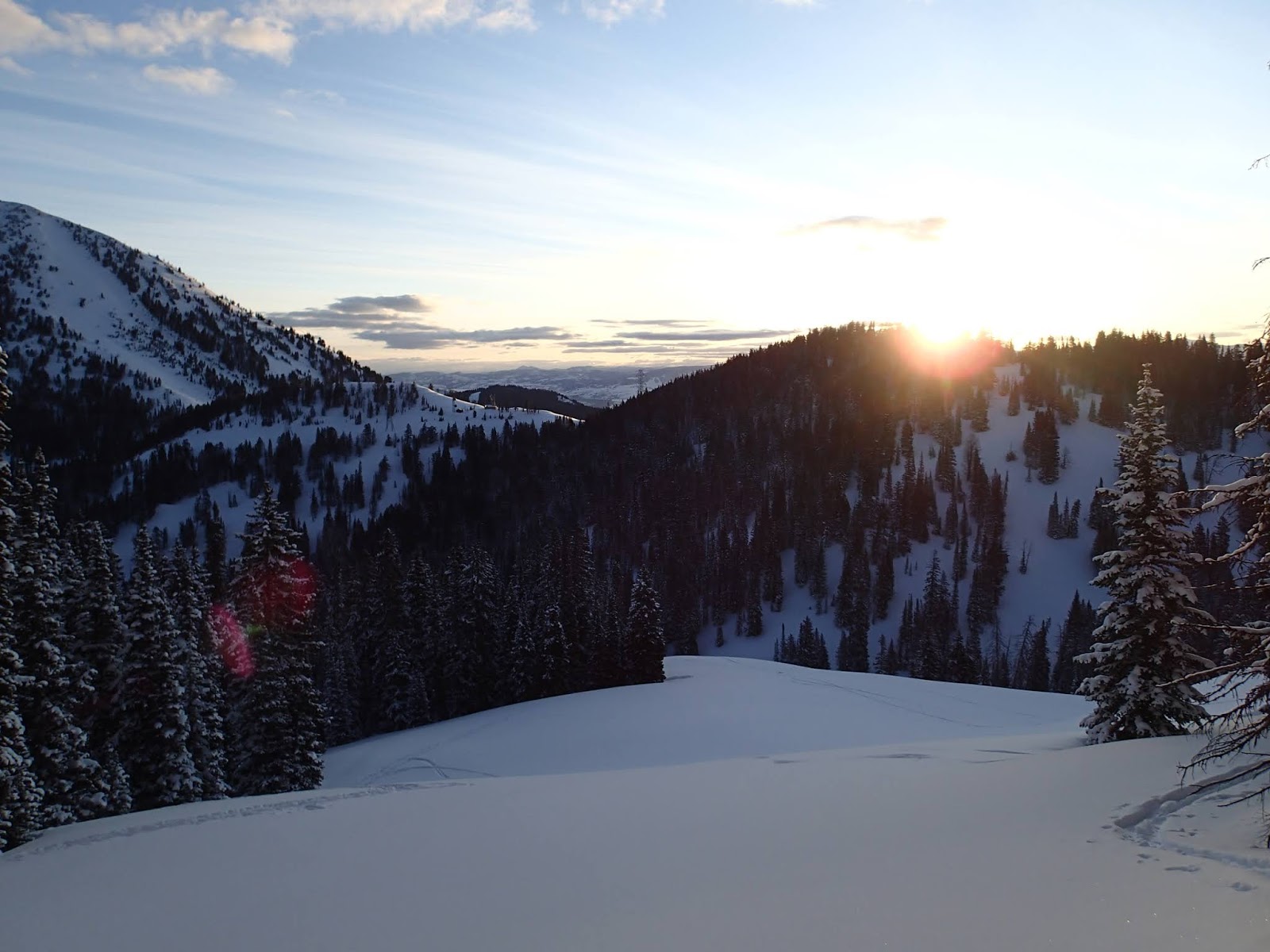 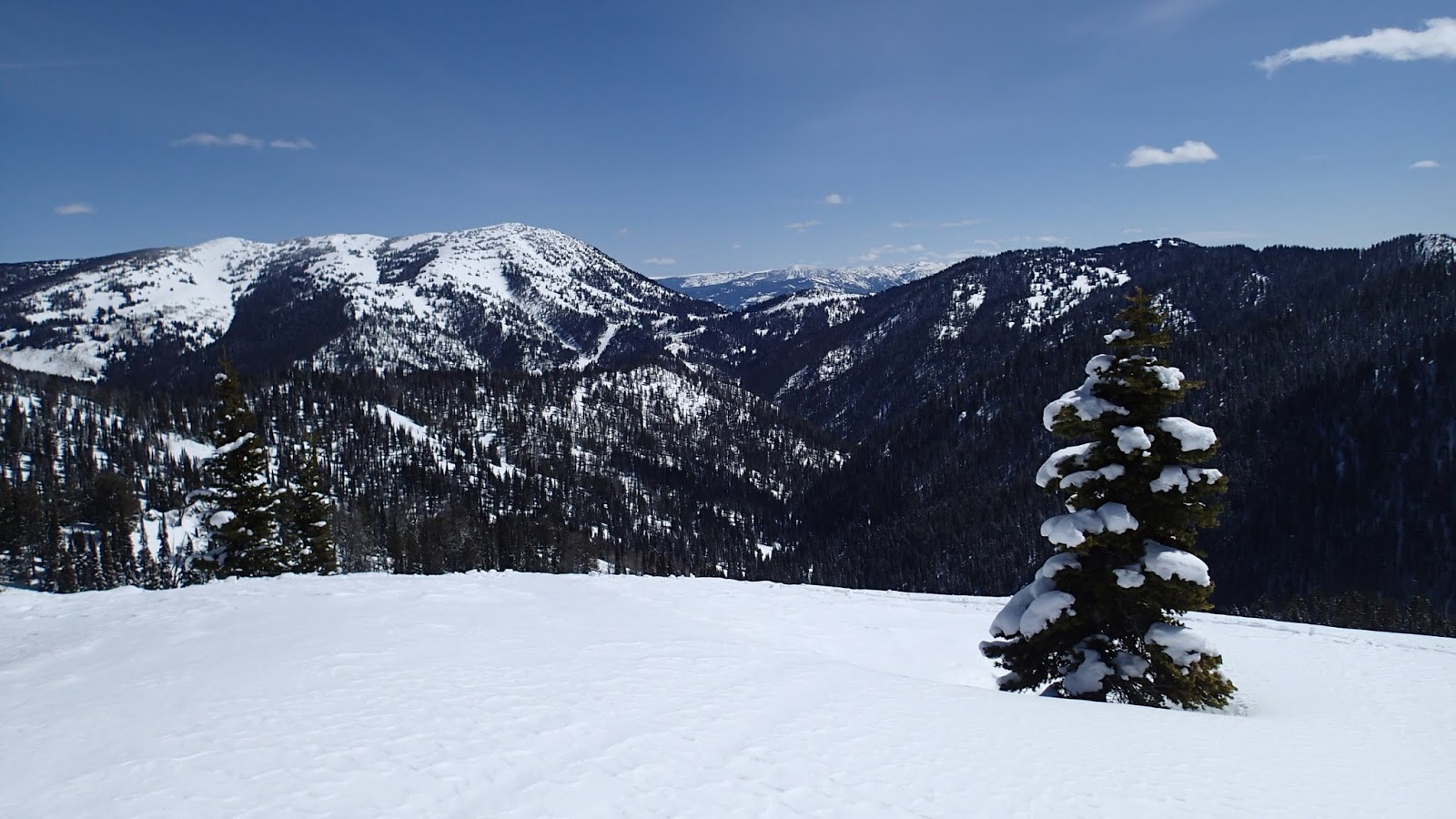 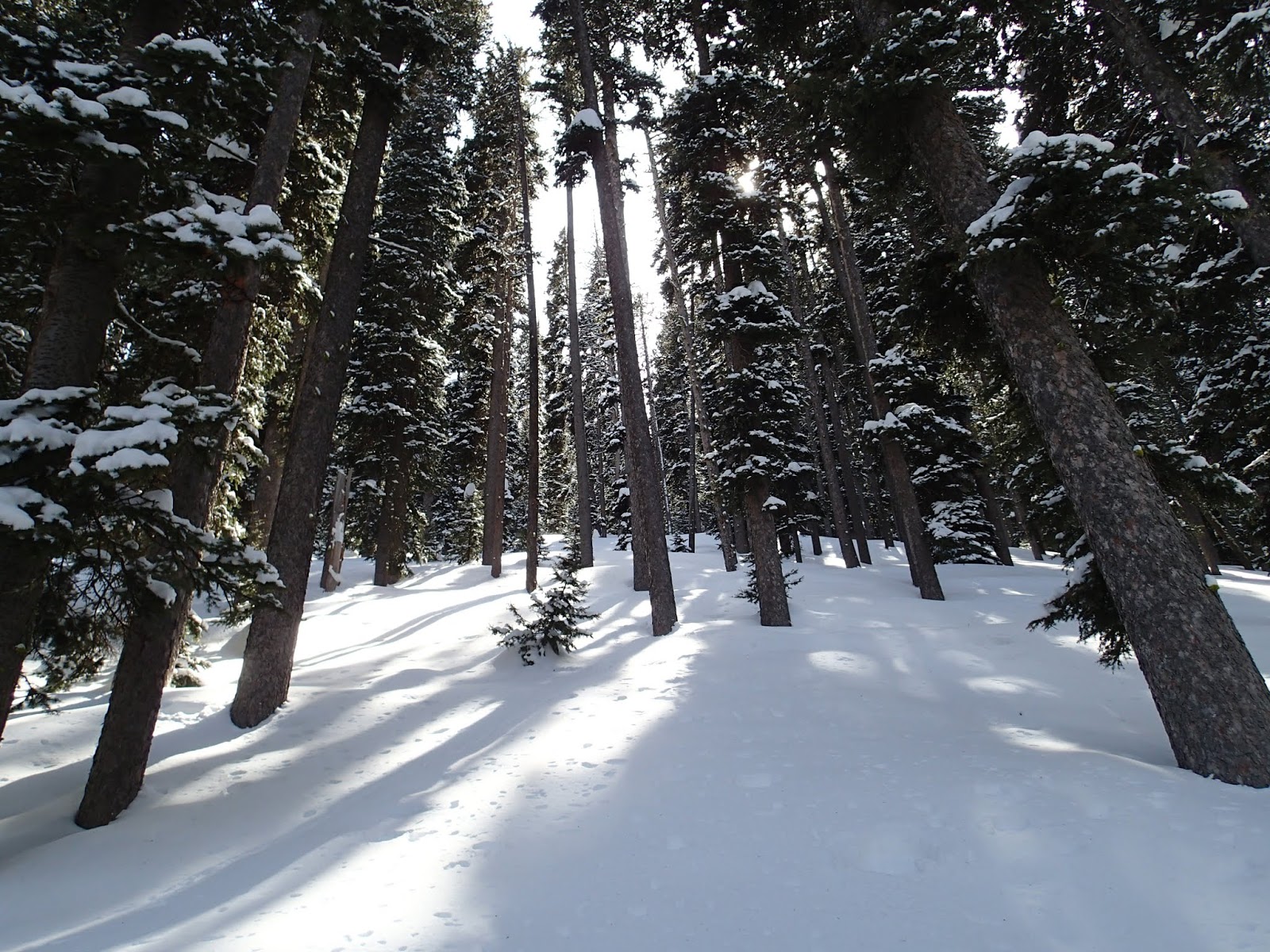